Pippo talks to the press at Casa Milan! 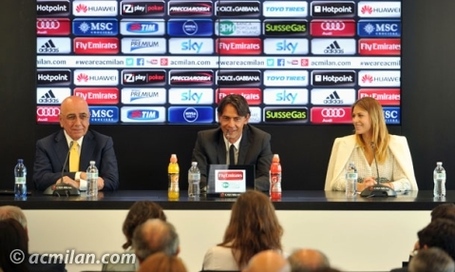 You can watch the press conference in English here

Adriano Galliani: "Our twenty-ninth pre-season gathering with Silvio Berlusconi as President of the club. 28 wonderful years have preceded this with 28 trophies. We are the world’s most decorated club in the world and we need to keep pace with the previous years. We’ve chosen a new coach to help us do that. He was a fantastic player with his force and determination. It has brought him to be the Italian player to have scored the most goals in European competitions including two goals in the last appearance in the Champions League Final won by Milan. He’s done very well as a coach in the Youth Sector winning the Viareggio Tournament. I can sense a good atmosphere at Milanello and he will do very well. We can do it and I wish Inzaghi all the very best. This is his day and I don’t want to take too much time away from him. You are loved by the President and everyone. Good luck Pippo."

Barbara Berlusconi: "Pippo is full of passion and I believe that he can be of extraordinary help in the promotion of the club. This is of great value for my role. Inzaghi was super as a player and can do well for the club. We are aligned with our way of thinking and in our way of promoting the club and adding value to the Milan brand. I wanted to just underline how well Pippo Inzaghi has done with the Youth Team last year when he demonstrated in the Viareggio Tournament how much quality he has. We hope that he can do the same with the team this season. We don’t want to take too much time away from him and I will give him his time now to speak."

Filippo Inzaghi: "I want to thank Galliani and Berlusconi and a big thank-you to the President. They have given me an incredible opportunity. When I retired they gave me a great chance. Milan has made my dreams come true and given me so much. Today I’ve become the coach of the most successful club in the world, no one should forget what Milan is about."

Adriano Galliani: "The amount of people here today has exceeded my expectations. After finishing eighth last season, which is not good enough for us, I saw the enthusiasm that is in the hearts of the fans. I saw it yesterday at the pre-season gathering and I sensed a really good atmosphere at Milanello. A cohesive environment and it all leads me to believe that it will be a positive season. Everything is there at Milanello. I think Inzaghi is the right person to take Milan back to where it has always been. It disappoints me to think of Milan not taking part in the Champions League. We’ve done it 13 times in 15 seasons. Pippo will take us back. As I’ve said, I saw a cohesive environment at Milanello yesterday. I haven’t seen it in a long time."

Barbara Berlusconi: "I’m expecting a lot from El Shaarawy. Last year he had a few problems but he came back a day earlier to the pre-season gathering. He’s a great talent and consequently I expect to see him with a lot of determination. He will give the fans a lot to cheer about."

Filippo Inzaghi: "The most important thing is to create the right Milan DNA. This means the right group spirit, coming to Milanello to train well. I want see the right spirit and return to winning ways. To do this we need a good group. At this moment my main objective is to create a solid group with principles and a respect for the supporters as they demonstrated today. I had goose-bumps seeing all the fans earlier today."

Barbara Berlusconi: "Casa Milan was designed to create a real source of contact between us, the players and our fans. We work for the fans. We’re very satisfied with the initial numbers. More than 10.000 people have already visited Casa Milan, we’re also happy with the takings. We can always do better. I hope the fans can celebrate the club’s success here. Their warmth is really rewarding for our new project."

Adriano Galliani: "Two years ago I thought Pippo could become a coach, he was uncertain. He could have been both a player and a coach. Since quitting the game he hasn’t put on one ounce of fat. He’s perfect and very disciplined. We set out the path to follow and he’s done this. I said to him yesterday, just think if we had let you go to Sassuolo…destiny brought him to the Milan bench, the club that is in his heart. Inzaghi has always been a favourite of Berlusconi, he was close to Milan even before joining the club in 2001. He always scored against us, but he was soon loved by the fans. He’s the right man in the right place".

Filippo Inzaghi: "I hope that my great desire to win is received by the players. I’m sure of it. When I accepted the job, I thought about the team that I have and the personal values. Tactics and technique come after. I believe a lot in this squad. I’m calm. I’ve also got former team-mates which can only be an advantage and help me. Formalities don’t matter, they have to have respect for my role and my staff. I don’t know what this team will achieve, but I want to say to the fans that this side will battle, because those that don’t won’t play in my team.
Balotelli? I’m calm, I spoke to him after Italy’s elimination. The criticisms have to make him stronger. I went through some tough times as a player, was criticized, but they made me grow. He’s an asset to the Italian game and Milan, I have to utilize his skills, he can make the difference. He has asked for a trainer a week before he returns to Milanello and this is important.

My role? As Antonio Conte said, the only thing that changes when you pass from being a player to a coach is that you don’t sleep at night! The experiences with the Youth Sector have taught me a lot, you have to keep on learning as a coach. When we lose a match I think that my staff and I can do more. As a coach you also become a psychologist, I’m ready. I’ll try to be fair, a coach has to know how to say even difficult things to people’s faces.
We came eighth last season and it’s clear we have to do something, but I’m calm. The owners are like me and want to get back to winning ways. I’ve asked my players to be purposeful, I want this type of spirit to return to the club and that the people have patience. The spirit to get the fans back to the San Siro is there, but I also want to see good football, an offensive one. We will have to be a real group out on the pitch, that is important. Last year Atletico Madrid with a good group was able to beat Real Madrid and Barcelona. I like the 4-3-3 formation, but I don’t mind the 4-4-2 formation either with two strikers. I will work firstly on the rules, such as eating well. I will be very strict about this.
The atmosphere and environment has been great. The Milan fans are brilliant. The passion is incredible. I read the banner by the fans and the anger. We all need to have this anger inside of us. We have to gain revenge. My motto has always been to do justice to the jersey. When I lost I punished myself because I was sad to see all the disappointed Milan fans. I will always forgive a technical error, but not bad behavior. A Milan player has to live the life of an athlete."

Filippo Inzaghi: "Milan can’t finish eighth. When we reached 3 Champions League finals in 5 years we had a coach that didn’t need to take care of our private life and we had great ambition. We won a trophy and wanted to win the one after that. We gave our all. When I didn’t play and then returned to the team, I wanted to show my coach that he was wrong to exclude me but not by disrespecting him, but by scoring a goal.

Needs? I speak with Galliani two or three times a day. The enthusiasm of the President has impressed me and he has passed this onto us. He could be Milan’s best buy because when the President visits he brings with him an incredible amount of enthusiasm. We know some players will leave but the club knows my requests. I’m convinced that this squad can do well regardless."