Few Clubs have as rich a history as AC Milan in the Champions League.  Seven time winners with ONLY Real Madrid having more wins.  Even more impressive, Milan's last four have come in my lifetime so my love of AC Milan is synonymous with the Champion's League Trophies.  As a child I was obsessed with it, I had a mini version that I would take outside and while I mimicked Donandoni or Massaro or Maldini I would occasionally hold my own Trophy presentation.  I was 10 and it was glorious!  There was just something majestic about it, while I imagine the World Cup to be truly special to hold, this one was just so much more.  The big sweeping arms, the giant body, and the fact that in EVERYONE puts it on their head! 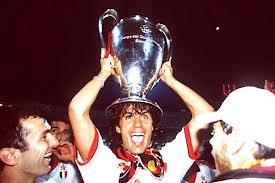 At the end of the day I can't sit here and say Milan have a chance at winning, not against this opponent.  This year's version of Dortmund, Atletico Madrid is like a buzzsaw.  Compact, technically skilled, and one of the most "Italian-esque" teams I have seen in ages.  The former Serie A man, Diego Simeone, has channeled his version of Serie A into his team and while they sit atop La Liga among the likes of Real Madrid and Barcelona, this match will be a challenge.  But Milan has never turned down a challenge, they have never shirked away from the most difficult.  For the last few seasons Milan have stood toe to toe with Barcelona and landed severe blows.  It was Max's Milan that taught others how to defeat Barcelona, and while they could never do it themselves over two legs, the pressure and intensity became the blue print others followed.

So as we get closer to Wednesday this will be your place for the Champions League preview.  Expect some preview pieces, tactics piece, and a special conversation with our very own Caleb.  What I would also like is to share your meaning of the Champions League in the comments!  We may not win, but the beauty of the CL goes beyond the result.