I think there was a unanimous WTF! from us all once this mercato closed as everyone questioned the acquisition of Matri & Kaka whilst the likes of Petagna, Salamon & Beretta moved out either on loan or permanently. This appears to fly in the face of two new tenets of the Milan Board, Youth is the Future and Financial Prudence. So, have the management thrown another curve ball or are we too close to the trees to see the whole forest? 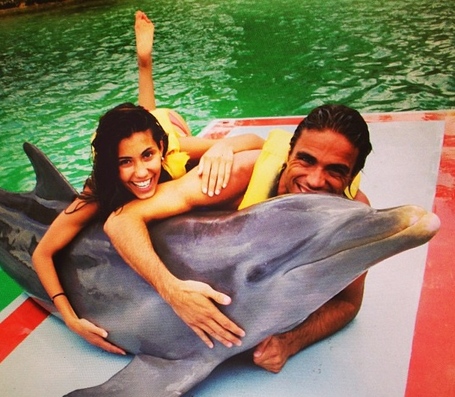 (Sorry, but i just find this picture plain creepy!)

We paid 11M for Matri, a player who has only mustered 10 goals a season for the last two years, whilst Juve helped themselves to Tevez. Having looked into this it appears that Tevez's deal is €9m+€6m bonus so could end up costing Juve 15M, although we had a deal in place for him least year (based on the proposed use of Pato to PSG money) we wouldnt have been able to afford him this time running.

We got Matri whilst we were still haggling with CSKA over a "Mill here, a Mill there" but the deal itself only appeared to spring to life once Boateng joined Schalke so would take an educated guess that the Prince money was earmarked for the Matri deal and allowed us to pull the trigger. We all know that we were waiting for confirmation of CL participation before this purchase so maybe this forced us into a last minute panic buy, if im honest i prefer this notion to the idea that we had already earmarked Matri from the start of the mercato. We have no idea how long, if at all, it will take for him to gel with the squad and what kind of partnership he can carve out with Balo, SES & Kaka but he will need to make an impact .....sharpish.

We can only hope that Matri's purchase is going to give Allegri more options in terms of squad formation as prima punta and hope he does more then just falling all over the place like in his Cagliari performance but would argue that he has a better squad to play off with Balo, SES & Kaka so he might just prove us all wrong.

There is a question mark over the length of the deal but feel that this might just mean we have more to play with should we want to sell him on at the end of the season. 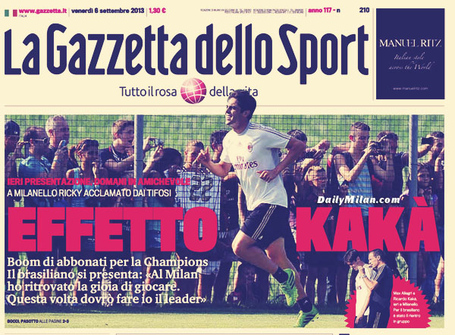 Yes the prodigal son has returned and during the celebrations, emotional displays of affection & group hugs alot of people, including fanboys like myself, were privately asking themselves whether this is in Kaka's or Milan's best interest? IMO, i have to wholeheartedly agree with UA3 and others that Kaka gives us more than Prince. Didnt matter where you put the Champion of Anti-Racism, upfront or in the mid, he was no longer playing for the team, thanks for the two goals but i would take Kaka MKII over Martin-Luther-Prince every day of the year.

It was announced just yesterday by Galliani that we had just sold 15,000 Champions League tickets ......in a day. The management havent rashly gone out and purchased Kaka at the last minute. You have to bear in mind that we have been hovering over him for 2 seasons now, readying to take him back when it was most opportune (ie when it would cost us the least) and think that the Management had already factored in the Kaka Effect both on and off the pitch. SES & Saponara are Kaka fans boys and still really young. Saponara is meant to be the new Kaka and whats better than getting him to play alongside the Master to help get the student up to speed? I cant wait to see Kaka play and think that even though he might not have the speed he will easily give us that spark we have been missing for the last couple of seasons.

It should also be noted that we purchased Vergara who, although still raw, showed some pretty decent skill during the preseason along with Cristante who is still in the 1st team. If you recall the PSV games, we played against a team of vastly younger and fitter players but the end result was even with our tired & unfit legs we still managed to get ourselves a 4-1 result over the two games. Yes, youth is good and is the future but i for one dont want to see Milan become a squad of kids. Its never what we have been about, as well as skill and technique we have long relied on experience and guile to add the necessary steel to our squad. The overall age of the squad is decent but dont forget that SES stalled the 2nd half of the season and it was nothing to do with lack of skill but more to do with lack of experience.

In summary, it's too early to tell if we have changed direction but dont be put off by one or two signings, i feel that we are about to have a pretty exciting season but bearing in mind Allegri usually gets off to a slow start i hope he makes the most of the international break and gets to work on possible formations to get the best out of the new additions as he definitely has more options now.