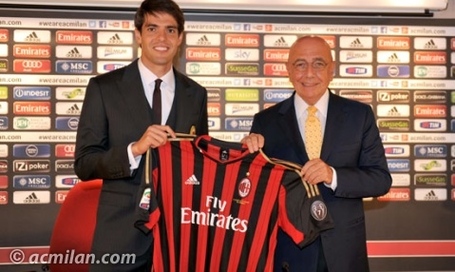 Kaka: "Obviously i'm used to playing in a winning Milan side"

Galliani: "It was the departure of Boateng that lead to the Kaka deal becoming possible" (THANK YOU PRINCE!!!)

Galliani: "In 2009 15k season ticket holders left....they are the ones that i referred to as the orphans"

Reporter to Kaka: "There was similarities with your return and Shevas. You both left and played under Mourinho were things didnt work out. Did you ever speak to him? Are you back here now as you want to prove yourself?

Kaka: "Nothing is Mourinhos fault. He taught me alot on and off the pitch. There is no bitterness between myself and Mourinho"

Reporter to Galliani: "What about the Honda deal? Is this still in place?"

Galliani: "Look! The transfer window has just closed. Ricky will stay. It's a two year contract. Do you think that Ricky Kaka would just leave after 2-3 months? The fans & ultras would kill us. They would kill him 1st then me! Ricky has no contract in place to join Galaxy. He will remain with us until June 2015" 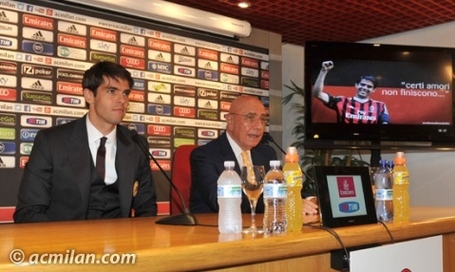 Galliani: "Kaka never wanted to leave Milan whereas Sheva asked for a transfer"

Reporter: "Can the fans dream of a scudetto now?"

Kaka "As Galliani has already said, we are one of the top 7 teams in Europe"

Reporter: "Do you think Madrid used you in a bad way technically?"

Kaka: "No. I was happy to play in a 4-3-1-2. The 1st problem was lack of continuity. The injuries didnt help. Then the coach changed. Ozil & Di Maria joined and there was very little space in the midfield"