So, did the Yellow Tie deliver?

Share All sharing options for: The AC Milan Offside Mercato Wrap Up Party!

Welcome! Grab a drink and help yourself to nibbles, Gian will be back shortly with some Pizza for all!

I thought it would a great idea to wrap up this mercato with a breakdown of who we bought & sold and to wax lyrical about how we feel about our summer spending, so feel free to mingle and listen in on the conversation taking place and throw in your own thoughts below.

AviA: I felt that this mercato was abit of a let down. Once the Champions League was assured I thought we would see 2 or 3 hard and fast moves to follow the departure of Prince. The Matri move had facepalm written all over it, as i had hoped that Petegna would be a Pazzo stand in but instead get to watch him loaned out to Sampdoria. It was worrying to see us scrambling for a CB with a few hours of the mercato remaining,.....like..really?? You didnt want to give Astori a sniff at the START of the mercato??

The Return of Jesus boy is also welcome but deep down inside feel that i would have been happier if we had landed Honda instead ( i mean i get why we have deferred his transfer but still it would have been nice). We moved on Ants, Yepes, Taiwo & Flam which was good but this is negated by the additions of Silverstre & Vergara imo. The Poli move was solid but dont feel like i wont have much to gush over once the Ricky Feel Good Factor ebbs away. Saponara is still an undefined quantity but the fact that he's already injured (and we tried to punt him to another club - who declined) doesnt bode well.

All i really wanted was a solid CB & a dynamo in the midfield. Instead i got Matri & Jesus Boy. I think Allegri again will have to try and punch above his weight with the squad and the CL games will definitely be interesting! If SES saved Allegri's bacon last season then its fair to say that Allegri has placed his bets via Matri chips for 2013-2014 so will be watching with a keen eye!

Ed: For the second season in a row, it's difficult to gauge how I should feel about the mercato just past, because it's difficult to figure out exactly on what criteria Galliani and co. were basing our approach. The pursuit of value? Adding quality upgrades? Straightforwardly patching holes in the squad? Consecutively, on each of these grounds, I would rate this window an A, a B- and a C-. There's no doubting that finishing up the window with a net spend of merely -£9,000,000 is a pretty good result for a club aggressively seeking to comply with FPP and balance the books whilst remaining competitive, and the cheap acquisition of Poli and Matri and the pickup of Ricky and Silvestre on frees were moves that will certainly make the accountants happy.

The problem is that this objective has directly impinged on the other two that I mentioned. In terms of adding quality, I'm perfectly happy with Poli as an upgrade for what we currently have in midfield, and Kaka as I mentioned in an earlier article will provide a necessary touch of winning edge with his superior technique and instincts. However, Matri doesn't give us anything special up top that we don't already have with Pazzini, SES and Balo, Zapata is merely a good option rather than a CB that will lock down the position for a long spell, and I'm not convinced Saponara will make the instant impact we needed our new signings to make.
Furthermore, by way of patching glaring squad gaps, Milan's performance has been downright woeful. As things stand, we go into another season now lacking in true defensive depth and without that quality trequartista who can provide service to the forwards. A serious injury either in the back line or to Balotelli, who more than any of our other options at top is comfortable creating for himself, would thus disastrously hit our attempts to make a serious go of things in all competitions. Missing out on Honda, who for my money was the perfect man to solve our problem of advanced creativity, means we also passed on a huge chance to sort out a problem area for the years to come.
As lovely as cheap transfers are for the books, in order to keep this club competitive our additions also have to be the right ones- right holes in the side plugged, right level of quality added. A couple of our moves this summer have been hits in this respect, a few have been misses- but the ones we haven't made at all will be the ones that seriously come back to bite us in the ass.
(Gian returns with the Pizza!)

Gian: If you look at this mercato from a macro perspective, asking yourself did the team improve? You say yes, we lost only one starting player and gained three potential in Kaka, Matri, and Poli. Poli will be the star of the mercato as his versatility and ability to be deployed in both the 4-3-1-2 and the 4-3-3 means, in my opinion, he will have the largest impact. If you look at the mercato from a micro prospective. Focusing on each transfer, each player brought in, you are left wondering what happened?

Being lied to by management in football is par for the course, so nothing surprises me anymore. If you are going to truly support a team you have to have thick skin for stuff like this, a Club is a business at it’s heart and times it is run ruthlessly in that manner, while other times it is run purely on emotion. So when Fester said we are going to play 4-3-1-2 with Saponara at CAM I took it with a grain of salt, like everything he says. If that remains a true statement our mercato was a fail, we added a striker to the long list of them on the roster while we plan to deploy one less. We still don’t have the CAM this team desperately craved since 2008 and our CB pairing continues to be average. But we "rekindled" an old flame in Kaka and the masses ate up the emotion hook, line and sinker. Mission accomplished.

But when you stop and take a deep breath and ask did this mercato improve our team top to bottom, giving Allegri the ability to be successful? No. He now is still left wanting the CB we need, the CAM we would like to have, and the ongoing question of what formation do we play for this team to work effectively? A good mercato answers all your questions, a poor one leaves you with more. 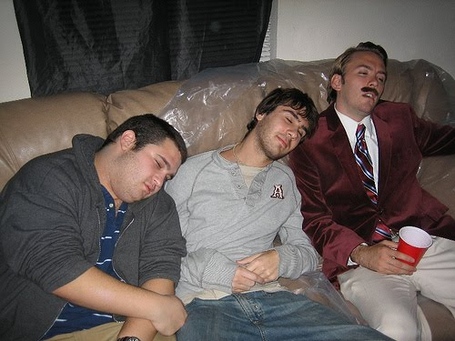 Someone wake us next mercato! (Gian's the Ron Jeremy Burgundy look alike on the right!)

Thanks for stopping by folks