Share All sharing options for: I think im gonna hurl!

Im not happy and i want everyone to know it! The following isnt a deep introspective but a good old fashioned rant that was kicked off by the following quote from our coach:

"I’ll look at the League table at Christmas. In my opinion, we will be in a different position by then. We’re a bit behind, but there are still so many games left. Let’s just think about winning tomorrow."

You know what i say Mr Allegri? Screw Xmas! I dont mean that in a make-all-the-worlds-children-cry kinda way but in the context of just because we managed a turn around the 2nd half of last year that from now on im prepared to subject myself to to AC Milan roller-coaster every season! 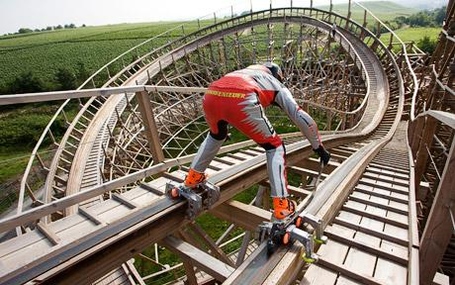 (how it feels to be a Milanista!)

Apart from Roma & the merda the league table is business as usual from the end of last season, where as Milan have worked its way into a position where we no longer have any margin for mistakes or errors for the remainder of the season. After 5 games we have been subjected to 2 draws and 2 losses where we have conceded 10 goals.

10 goals in 5 games?? Its obvious where the problem lies, even the Ultras went as far as their banner telling the management that attack wasnt the issue for Milan.

Some pin it on Allegri, others Mexes & Zapata, some on Fester. I simply dont care at the moment, all i know is we need to stop haemorrhaging goals stat, Allegri can turn every game into a war of attrition for all i care, grind out 1-0 results ala Capello and i for one will be happy.

Galliani even went as far as saying in the summer that we had traditionally made slow starts so there is evidence that the management even know this is a problem and yet seem to have done next to nothing about it. There was no real major signing in the summer and no real backbone added to the defence, we STILL haven't decided what the best formation is with announcements being made to the press during the summer about how we would be reverting back to the 4-3-1-2 but with nothing done in terms of purchases or simple preparation to actually back it up.

From now on i will be watching every game as a do or die situation, i will be expecting the team to go down a goal within the 1st 20mins or so and will watch through my fingers as i hold my head in my hands as we struggle to get back into the game, anything over and above this will be a bonus at the moment, a win will be pure joy!

I want to finish on a good point so want to say that its been really good on the Milan Offside recently with some really great convos taking place im the midst of a shitstorm, you have all taken part in some really constructive discussions and reminds me of why i joined the Milan Offside in the first place. Well done all! We might need to hep each other out for the remainder of the season, so keep it up!