Allegri Serves up some Turkey

Share All sharing options for: Allegri Serves up some Turkey

Milan went into this game hungry after last weekends match and chowed down on 3 helpings of well done Roman Eagle Turkey to fill their stomachs! 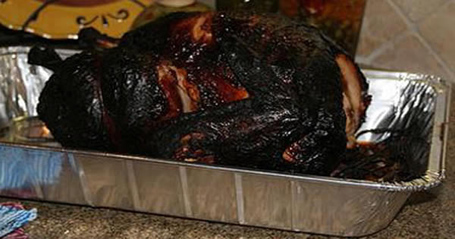 The match started off at a frantic pace as the home side went all out in attack, after having learned a lesson from last week, as they attempted to secure a victory early on.

Monty played an amazing through ball to SES right after the start of the game as the Pharaoh made his way into the Lazio box and was really unlucky not to score as he tried to nutmeg Marchetti who only just managed to get enough on the ball to take the sting out of the shot. This was followed by another chance a minute later as Boa attempted to pick out SES who I reckon was brought down by Marchetti. It was similar to another penalty im sure SES won earlier in the season, where he ran into the box and managed to put the ball just beyond a keeper who brought down the Pharaoh, Rizzoli obviously hadnt watched that match and decides against giving a penalty, damn you!

Lazio, feeling the pressure, where having none of it but it was quite clear that they were on the back foot early on with only one real chance within the 1st 15mins as Yepes, under pressure from Flocarri, lost the ball and allowed Candreva to set up a pretty good chance for Flocarri who oddly fluffed it and allowed Abi to save a rather tame shot (we invented a new game for match days, you call out what Yepes looks like as he trundles down the pitch, whether he reminds you of a jumbo jet that has run out of runway or a blindfolded elephant running amok , feel free to call out!)

De Scig settled into the game early on and made some, dare i say, Maldini-esque interceptions but i was equally impressed with his runs down the left flank & crosses into the box, i still cant believe how amazing our entire left flank now appears to be when you recall how we couldnt even get the LB personnel right! Swaaag! 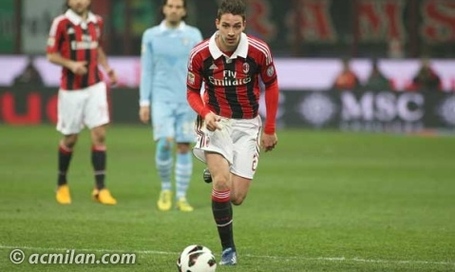 Pazzo showed his hunger when he shielded the ball while under heavy pressure from Biava and set up SES with a ball he really should have put it away!

On the 14th min De Scig again makes an amazing interception and then worked to put SES through on goal who appeared to be clipped by Candreva. Now at the time it looked to me like Candreva tugs on SES' shoulder but as milams rightly pointed out it was more to do with Candreva clipping SES' feet just slightly outside the box. The way i read it was that SES was easily through on goal and one way or another Candreva brought him down from behind when SES was easily on the way to cracking off a shot and taking into account the earlier penalty that was wrongly denied i was happy to see Candreva talking a walk!

The resulting freekick was a bit of a waste but felt that it at least showed that Milan have been practising something for when Balo isnt available.

This match again was pretty much the Monty show as he continually received or won the ball in midfield and picked out sublime passes to De Scig (more than to Abate) who was pretty much making the left all his and had a super sweet stretch for a good 20 minute spell either side of the penalty.

Ambro & Flamini appeared to be taking it in turns to marshal Hernanes who was having a pretty quiet night imo and more so after they went a man down and appeared to switch their 4-1-4-1 to a 4-4-1.

Quiet isnt a word that could be used to describe our lot as Pazzo made a bit of a hash of getting his shirt tugged by Radu and got himself a yellow after trying to latch onto another sublime ball from Monty, this was followed later by Monty picking out De Scig again who picks out Pazzo who does an amazing turn and shoot after getting himself under the ball by popping it up in the air, unlucky!

Yes Lazio were a man down but they were on the ropes since the start of the game and have to say i was pretty impressed at how fluid we kept it even with Lazio dropping into two banks of four, this was shown near the end of the 1st half where Abate drilled in a ball that Marchetti deflected out to an oncoming SES but he didn't connect making it easy for Pazzo to get his 1st of the night and should have easily have had a 2nd not long after by heading a corner that Marchetti did pretty well getting down to palm away only for a waiting Boa to smash in a free-ball. 2-0 Milan! 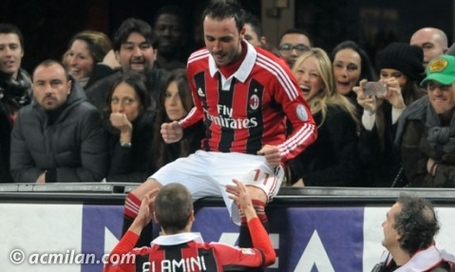 We pretty much kept this up for the 2nd half and it was only after Pazzo's amazing goal where he latched onto a poor clearance by Radu to drive in his second of the night that Lazio appeared to wake up as they cut their way down the field into our box only for Flocccari to send the header wide.

But whilst all this was going on Team Sub-Early where probably getting anxious to the fact that Allegri had only subbed in Zaccardo at half time and where breathing a sigh of relief when FINALLY Bang Bang Niang came on for Pazzo. 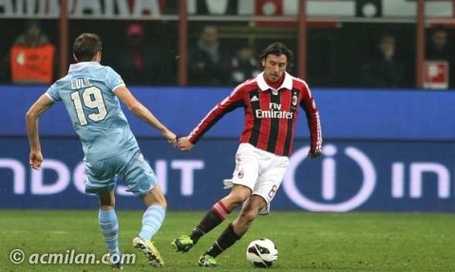 (Another game we now have on the Offside is to see how many times either you or the commentator confuses Yepes for Zaccardo or vice versa!)

Alas, even though Allegri subbed in the Frenchman before the 70th min he didn't manage to score but instead bounced a wicked shot off of the wood work but feel that it wont be long before the Frenchman becomes a regular on the score sheet but worry that he may being to feel the pressure as his team mates appear to score at will. 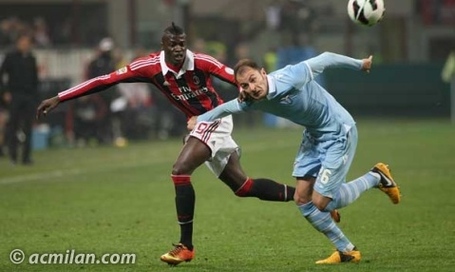 In short, this was a game Milan was going to win regardless of whether or not Lazio went a man down, the plus for me is that the team appears to be peaking at the right time and finally we appear to be ticking like clock work as this was one of the few matches where we were good in both halves. Pretty much everyone had a stellar game, but De Scig and to a lesser extent Abate are due praise for the tireless work on the wings and Monty was pretty pivotal last night as he was behind nearly every ball that lead to a run down the wing or into the penalty box. Boa, SES and Pazzo in particular were all epic last night, SES was unlucky not to get onto the score sheet, Boa seems to have finally woken up and realised that simple play with team mates is far better than solo efforts. Pazzo brilliantly staked out a reminder to the coach & fans after his heroics which were duly noted considering that he easily should have had a hat trick.

We now find ourselves in 3rd and unless he is an expert bullshit artist or someone who knows what the hell he is talking about, the only person who knew this would happen was Uncle Fester! Even if its not where we finish this season, i for one am happy to see the ground work laid for the coming few seasons and feel that Allegri and the squad deserve a pat on the back after having been given up for dead only a few months back.

(Big big thanks to all who joined in the match chat last night, was a great night to share!)