A few posts ago, a new commenter posted a great comment, it got me thinking. Maybe we should discuss pressure and cover defending.

The quote is here:

U’ve placed an argument against the 4-2-3-1 which i purely do not understand…
As you yourself have mentioned the 2 have to be complementary players and we have exactly the type in de jong and montolivo… if u remember goals that barca and parma scored against it was because of both players sliding in for the same ball..They are this teams strongest asset and all of us can see that monty is not at his best when on the right…

His name is Dalson, and his point is that Monty and NDJ should be able to coexist as a double pivot. For those who don't know a double pivot is two midfielders paired together who work in unison to press and move forward while the other holds, or vice versa. A key to their success is pressure and cover defending, but to take a step further the key to any team is pressure and cover defending and the balance it helps achieve. The key to Sacchi's Milan was the appearance of an infinite pressure and cover situation, if you had the ball against Milan the first player always pressed and behind was one or two players in cover, robbing a passing lane and impeding you dribble. 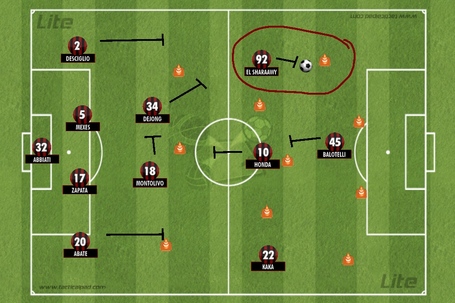 If you follow the logic, and any good tactician should, that the first player should press the ball the team immediately falls in line to align with that pressure. If in the diagram below Milan is deployed in a 4-2-3-1 and SES does not press, the shape of the team suffers due to the responsibilities required of the rest of the team. The key to breaking down an opponent is to move the ball laterally, say in two short passes to create a lack of pressure (opponents stretches) and the long ball can be played into that space. In the 4-2-3-1 if someone doesn't pressure in the advanced lines, it leaves the rest of the team, and most importantly the double pivot at a disadvantage. 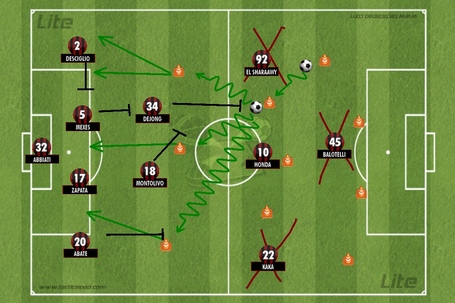 If you watch good teams, the CBs never need to pressure, they are in a constant state of cover, which means their partner is never pressing and they are never the last man. This requires pressure ahead of the CBs and when done correctly your CBs resemble sentinels shifting and sliding along the play and closing the danger gaps. When teams are stretched as Milan often become, say a missed press by a forward or Monty getting smoked, the team needs to compensate sending a CB to press and leaving the other on an island. Now to imagine how much worse it gets when your CBs haven't returned from a Corner Kick and NDJ, one of your better pressure and cover players is left to defend home base. Welcome to AC Milan!

So while I don't disagree with Dalson, that those two could make a great double pivot, the problem is not with them. But the assumption and requirement of those ahead of them to pressure the ball when called upon is the real problem I see with the 4-2-3-1. Thanks for the comment and hope other such questions/comments come up for discussion.