I understand why Max is making that face. This roster is not one that screams a formation when you look at it, but there are few viable options and if you saw the last two matches the 4-3-2-1 or the XMAS Tree as it was affectionately known by many tifosi here, offers a unique answer. I would like to take the diagram below and break down some key areas as we did the 4-2-3-1. The beauty of the 4-3-2-1, in my opinion, is that while I presumed Honda to be a Milan player here, even if he doesn't arrive, this formation can and should work. 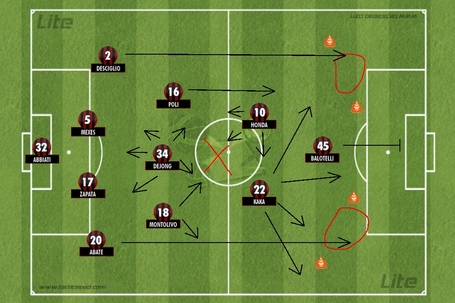 As I noted in the 4-2-3-1 piece, I still believe the area between the CB and fullbacks is the most crucial area to exploit for an opponent. I highlighted those areas above, but for me the key element of the XMAS tree is the X. This is the area where Milan can converge to suffocate an opponent and create a dynamic opening to spring a counter attack, so bear with me as I flesh this out.

As noted in the diagram above, width comes from the fullbacks as most deployments do in Italy. Due to this, the role of NDJ because one of sweeper in front of the CBs where he fills in defensive gaps. Under Carletto, Pirlo played that role but based solely on the fact that he had Ambrosini and Gattuso did the dirty work to fill in the defensive gaps. Now you could argue that Monty can play the role in front of defense and it may in fact work in certain matches, but this is dependent upon who plays the other midfield roles and what is expected of them. The diagram above assumes that Poli is the starter so it changes the dynamic a bit, but one of the beauties of the 4-3-2-1 is that it can be deployed with alternative personnel to yield a different tactical dynamic. More defensive, NDJ and Muntari alongside Monty, more attacking, flank NDJ with Noce and Poli. More balanced, play Birsa in a CAM role. Want to go all out attack, play SES, Kaka and Balo up top. The lack of reference of points and flexibility are key here.

One of my favorite aspects of this 4-3-2-1 and one of the biggest differences from Carletto's is that this deployment will rely less on the 20 meter pass and more on the triangular combinations that opponents miserable. Towards the end of the Carletto era opponents knew if they suffocated Pirlo they stopped the flow of service to Kaka and in turn stopped Milan from scoring. It was so simple that the matches in 2008 were replays of themselves, painful. The deployment above will allow infinite short-short-long combinations springing players like Kaka or Poli into attacking channels on goal, or utilizing Balotelli's physical presence to hold possession on the ball, engaging a CB and creating a channel for a slipped pass on goal. As Dalson pointed out in the comments from the last tactics post, it doesn't need to be Balo all the time, and Pazzo or even Matri can do this job as well.

The one similarity to Carletto's deployment will be the interchange between Kaka and whoever is slotted alongside him. This role has to be one of balance, but in true tactical evolution, success will come with the removal of a reference point and dynamic flow of passes. This formation allows Kaka to flourish in what he does best, as evidenced by the last two matches, but allows other members of this team to be deployed in roles based on the opponent and desired yield for the match. It will be difficult to work all the strikers into the mix with this formation, but being able to deploy SES alongside Kaka may prove a very interesting prospect if the balance will allow it.

I would like to cover the 4-3-1-2 in a few weeks and some great comments on the last posts gave me some more ideas. It would be great to get some feedback on that and see what people are interested in. I know tactics are not everyone's cup of tea, and want to keep a balance here just like is needed to be successful on the pitch.