For those who don't know, the 4-2-3-1 is my preferred formation. I have used it to success, I have morphed into a 3-5-2 when applicable, and deployed it in ways that would make some folks cringe, such as with fullbacks in the high wing spots. It has always been a formation I have admired for it's adaptability in deployment, and the ease of transition from offense to attack based on player traits. Player traits are beyond important in the deployment of a formation, without the right ones your formation will not be successful, with the wrong ones, even the most well thought out tactical deployment will crumble.

I have said time and time again that as much as I like the 4-2-3-1 as my preferred formation, there is no formation worse for the characteristics and traits of AC Milan. This post is going to get technical, massively long winded, and I will refer often times to the following diagram, but if you stick with it you may be rewarded. For those who are students of tactics, this should be fun, for those that aren't, sorry there are probably Milan blogs that talk about nonsense or unfounded rumors so go find those and enjoy... 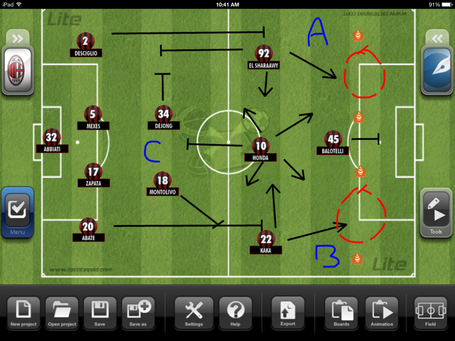 There are three key areas I find pivotal in the successful deployment of the 4-2-3-1, they are marked above in A, B and C. I will discuss each area and why I believe the players in question, even at their most engaged technical levels will not be successful in the roles required.

I will start with area, or what I referred to as the Cristiano Ronaldo zone. The space between the right fullback and centerback is the soft under belly of any team, but this zone is the most crucial for a few reasons. Typically, you have a right footed player who can get forward and cross, this means his left side, the side SES is going to work into, is going to be vulnerable. Most CB's are right footed and will tend to move into that space, but that is where Balo will drag across and now you have a channel in which an adept striker will slaughter teams in. Now SES is not this sort of striker, he is adept, but not here. As Balotelli created space last Stephen didn't seem to exploit it. First and foremost because opponents saw him as dangerous and he was getting the CB and RB/DM combo while Balotelli was getting a single marker. This is a good problem, as a team works together to create and exploit space, but SES's inability to break hard into the gap is an issue. SES relies more on finesse as opposed to the blunt force trauma of a player like Ronaldo who explodes into the space with the sort of pace that makes your hair stand up. SES is more of a dribbler and often times to the point of no return and he has closed off a channel or trapped himself into space. I haven't even begun to cover his defensive shortcomings and while his work rate his incredible, it won't make due in the highest levels of plays. For the record, I love the kid, we should be building around, not Balotelli, but no way it works in this formation.

As for the B area, it was in fact an area worked very hard by Kaka in 2007. Seedorf usually drifted central and then Kaka worked the same vulnerable area in between LB and CB. The problem now is that with Balo dragging towards that space, you run into a bit of congestion. Assuming (I say this so lightly because of recent transfer blunders) Honda does arrive, for the purposes of this exercise, you now have two players, right foot preferred moving into this attacking channel. In the diagram I tried to create "differing" runs, but any coach will tell you those run lines are utterly useless after the first whistle as the channels open and close rapidly in the course of a match. Again, this is not even considering Kaka's defensive shortcomings in tracking fullbacks runs and what it does to the midfielders.

The final area is C. When I deployed this formation most successfully I had two very adept passers and tacklers, perfectly balanced players. Think Bradley or DeRossi in style, surely not in stature. I have been successful deploying a more thunder and lightning approach, sort of what is shown above, but the problem is once again that of space and balance. The most recent formation I deployed had an astute passer, great vision, but slower than the clock on a work day. Alongside him I put a bear of a tackler, a kid tougher than nails. Now to his credit the tough kid could pass and play a bit with his feet, and together they made one super midfielder, until we got stretched, and then the problems started...

For those that don't know, a simply key to football success is a compact formation. Anyone who watched Sacchi's Milan can attest to this, the squad deployed like a Samurai army, every line appeared as though there were more players behind it almost an illusion suffocating play from the opponent. Max's Milan did this in year one so incredibly well it gave me flashbacks. When you play the 4-2-3-1 the ability to track and fill, which means the outside attacking mids track back to the inside channel, is very important. I showed it above on SES's side, but assumed Kaka would not be tasked with this and showed what happens with Montolivo. Immediately Monty would have to shift right or "stretch" and now DeJong is left in the proverbial no man's land, all alone in the center of the park. Truth be told he is living this nightmare right now, and the results are showing it. If you lose the double pivot, you lose the midfield, and if you lose the midfield you lose the match. So while some will say Zone C is the most crucial, you see how it starts at A and B.

Again, this is my formation, and if I were to Coach again, I would choose players solely to fit. Leaving behind certain "talented" players that maybe didn't fit the traits required, but this is team building. Football is not buying the best eleven players and expecting magic, ask Man City or Malaga, it is building a cohesive compact unit. Milan simply can't play this formation, and if this was of interest to you I will do the same with the 4-3-1-2 and reflecting why, based on player traits, that is the ONLY formation going forward for the current roster.

Hope this wasn't to dry and it was enjoyable as well as a learning experience for those who endured the length.