When your roster doesn't have the answers, you throw darts at the wall.

When you think of the 4-4-1-1 you should probably look straight at the EPL. While the EPL has come a long way tactically, the 4-4-1-1 is a variation of the 4-4-2 and really made famous by Sir Alex Ferguson. The difference between a Milan's 4-4-1-1 and the more classic SAF style, is in midfield width. Italy is not known historically for it's wingers and wing play, while times are changing, it is still very rare to see players like Antonio Valencia and Ashley Young. Instead you may see wing backs who can play both sides of the ball, but the point being is that Italy has not always been a country of tactical width.

Width in Italy more often comes from fullbacks, and Allegri is no different. His time at Cagliari, when he won Coach of the year, was marked by a solid, compact narrow midfield. Something he carried over to Milan in the Scudetto season. Width for Max comes from the fullbacks, and the team sprays into 4-6 six attacking channels with well timed midfield runs. When Max opted for the 4-4-1-1 he had no intention of playing it with width in the midfield, in fact it was sort of the opposite. Max wanted the midfield to remain tight and compact, in a living breathing shape moving to the ball while remaining in cover for each. Width in the 4-4-1-1 came from the traditional Italian style through the full backs. The problem with said system for Milan is more in personnel and characteristics. 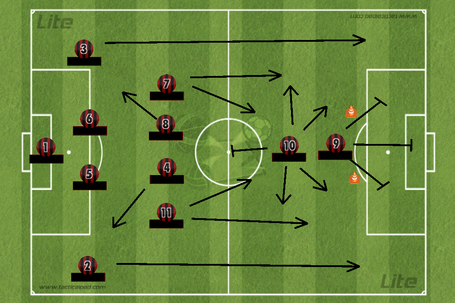 Forgive the numbers, still working out the kinks in the app!

Kaka has made things very difficult for the Coach. Truth be told he has made it difficult for all his Coaches. Not a midfielder and not a striker, Carlletto had to build around him in the 4-3-2-1 and Mourinho chose to build without him. Now Max is stuck with a conundrum, build with an aging star or work him into an existing system? The problem is neither seems to really be working, 4-4-1-1 included. Balotelli, on a good day, can be dynamic, whereas the striker in a 4-4-1-1 must be a point man. Someone to hold the ball up and let the second striker and the midfielders run into channels. Does that happen at Milan, sadly no? Our midfielders don't make those runs, Nocerino was incredible at it, but have you ever seen Montolivo moving into a channel?

While I understand the attempt at the 4-4-1-1 to make use of Kaka and Balotelli, neither players seems willing to sacrifice what needs to be done for the other in deployment. While the midfield, even in a more compact system as deployed, does not get off the mark quick enough to be a boon in the attack. Nocerino and Flamini did it, but not much of anything else, but the team didn't need it. Now the team needs the balance of Poli and Muntari, and the runs forward are erratic, the Catch 22 continues...