Something Fun in the Wake of Tragedy

Share All sharing options for: Something Fun in the Wake of Tragedy

So I have to admit this weekend's tragedy sort of got to me. To see a player collapse on the pitch so soon after Fabrice Muamba was tough, the reactions and the faces around him were even harder to deal with. So I took a day or two to and instead of turning our attention riht back to Milan I can share something very special. For those that don't know Avia, he is a good friend, and one of the first commenters when I started blogging all those years ago. Over the years we have had great disuccions, shared great stories, and even did a little podcast. All we haven't done is shared a pint and a game of football, but all good things come in time. So when Avia told me he had put a piece together, I couldn't wait to share it , but more importantly thought it would be perfect for this week, focusing on the good old days!

One Night in Heaven with Avia (well two actually but who’s counting right?)

When we’re not exchanging pleasantries with the Milan VP or harassing our coach or stalking the Club President you might catch us hanging out at informal gatherings where we meet up with some of our club legends to keep in touch with our illustrious heritage.

Take the past fortnight for example, I bumped into my all time favourite player Franco Baresi! For those of you that don’t know, Franco is considered to be THE captain of captains at Milan and had a career which spanned the Sacchi & Capello eras and even today is still considered to be one of the best defenders ever to grace the game, Gattuso recently compared Silva to Baresi and I honestly feel there is no higher compliment you can pay a defender.

Franco was kind enough to sign a shirt for me and I loved the fact that he broke off talking to someone who had turned up to collect him to sign my shirt, you can even note from the pic the care he is taking to write his name legibly on the red stripe (obviously a perfectionist!) We met the day after the Barca match where Milan held the Catalans to a ballsy 0-0 draw, I took this chance to ask him how he felt about the current state of Milan to which he replied "We are doing very good!" 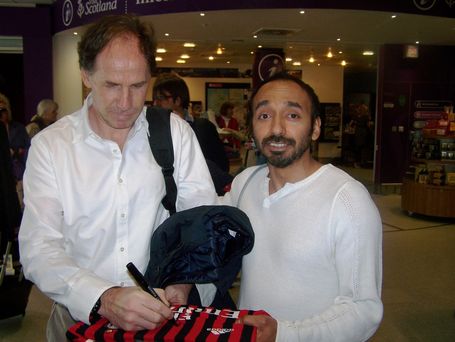 Later that night I attended a charity dinner graced by the Milan Glorie, made up of players from the Glory days of Milan. The event was a fund raiser in support of Glasgow Rangers FC who are currently in administration which is sending shockwaves through the Scottish Football fraternity but that’s a whole other story, I just want to stick to the Milan side of this, I’m sure none of you will mind? 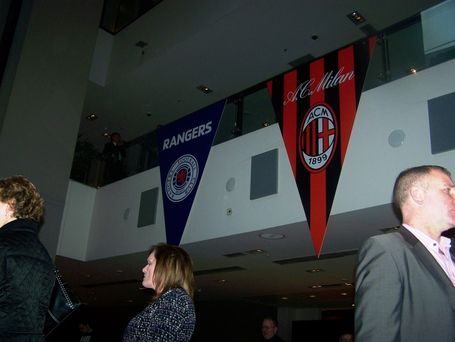 "Who was there Avia?" I can hear you all excitedly shout, well let me continue and I will tell you.

Well Franco Baresi was there obviously as was some guy called Daniele Massaro? Allegedly he scored against Barca in some kind of final in 1994 or something. Oh, wait a minute! THE Daniele Massaro???? I frickin LOVE this guy! He’s one of my all time favourite strikers! I managed to find him walking about the bar before the start of the event and there was NO chance I was letting this opportunity to meet an idol pass! I got a hand shake and a pic of the legend. 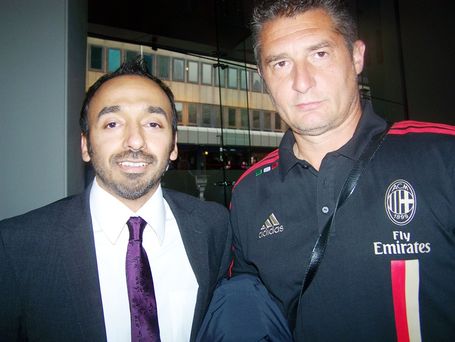 (Oi Pato! I wouldn’t let you shine this guys boots!)

Meeting Massaro for me is a big tick off my bucket list, my head was already spinning at having met Baresi earlier in the day, getting him to sign my shirt and actually talking to him, the only way this night could have been any better would have been if I had got to meet Jean Pierre Papin…….and here he is! 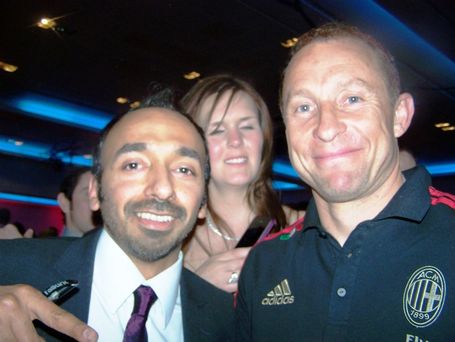 (Me and JPP! JPP was the strike partner of a certain Marco Van Basten)

I have to make mention of the reverence with which Milan were held during the whole evening and genuinely touched by the spontaneous applause that broke out whenever France Baresi’s name or Milans achievements where mentioned bearing in mind I was literally one of the few Milanista in a room packed with Rangers fans! 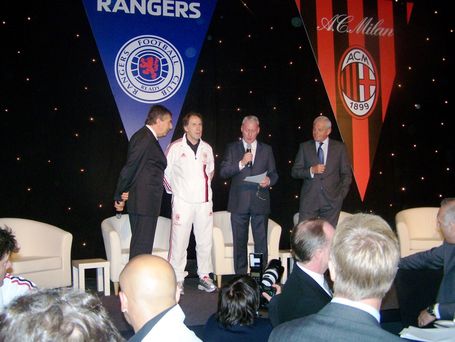 There was a special video montage of both clubs achievements and got goosebumps when Milans video got an ovation from the Rangers fans, now that’s respect!

There was an auction and a raffle to win Milan & Rangers related prizes as well as a few Q&A sessions with the players on the stage recounting the glory days. It was funny to note that Mark Hateley (who played for both clubs) mentioned that during his time at Milan it was the 1st time he came across a club where the players diet, conditioning & fitness training where all planned and closely monitored, whereas a few seasons later after he joined Rangers he was drinking heavily 3 times a week lol! 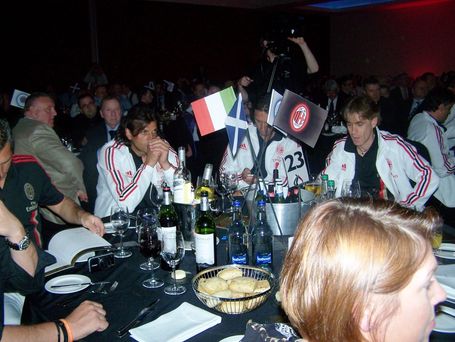 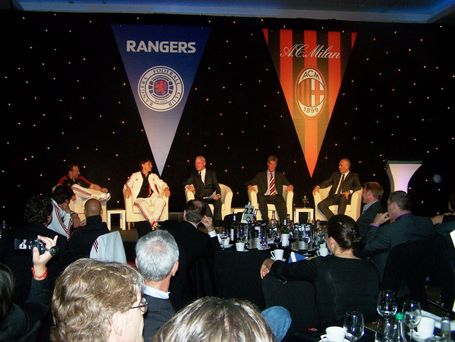 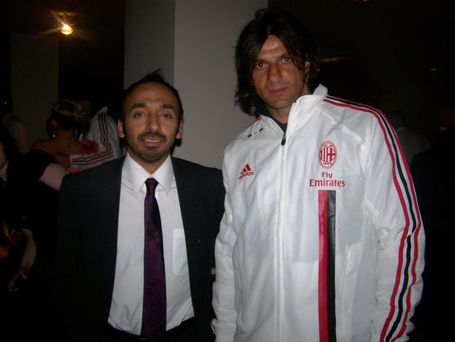 (Lentini) This guy was a record signing for us back in the early 90’s and was involved in a near fatal car crash soon after, ouch! 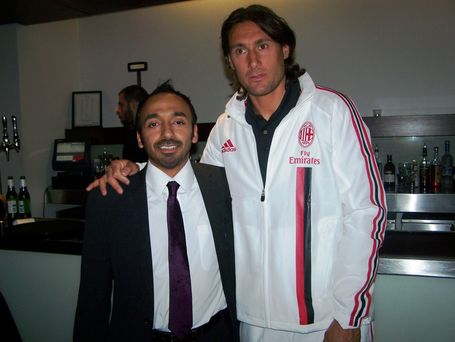 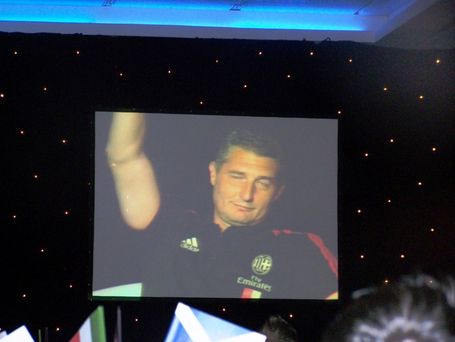 (Turns out Massaro is quite a funny guy) 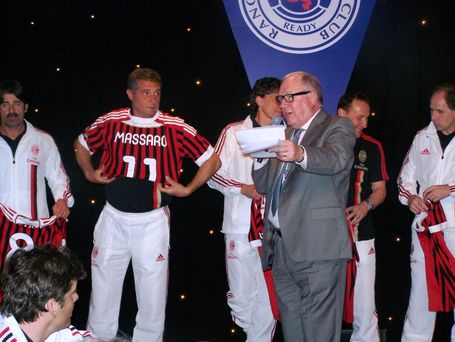 (When the guy with the mic pointed out to him that he had his shirt on backwards, Massaro replied he was wearing his "Gattuso Style" which got a rounds of laughs from the audience) 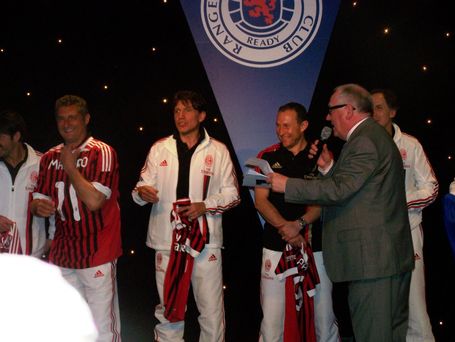 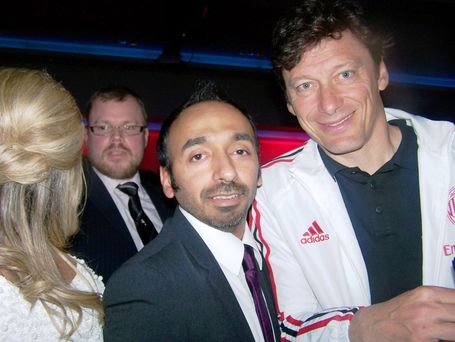 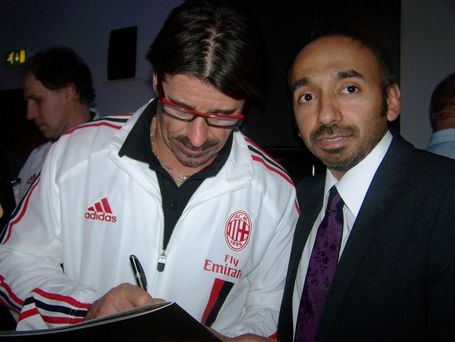 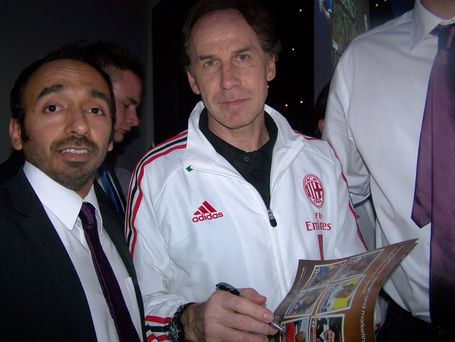 (Me and my old buddy Franco – because just one autograph is never enough!)

Sigh, it was such a great night, I didn’t want it to end and as I walked around smiling like an idiot whilst mingling with genuine legends I couldn’t help but wish I’d had the chance to watch these guys play ….……….oh that’s right, I did! J

The following evening there was a match between the Rangers Legends and AC Milan Glorie where the squad from the previous nights events were joined by ……..Maldini, Billy & Boban!!!!

It was a sell out event that was delayed by 15mins to allow all the fans that had turned up time to get into Ibrox Stadium. I had seats behind the goals, which I wasn’t too thrilled with to be honest but then realised that I had Maldini & Baresi infront of me and got all warm and fuzzy as I watched Baresi marshalling the backline like days of old. It was like a dream come true to be honest and I just sat there like a star struck teenager as I watched true club legends on the pitch. 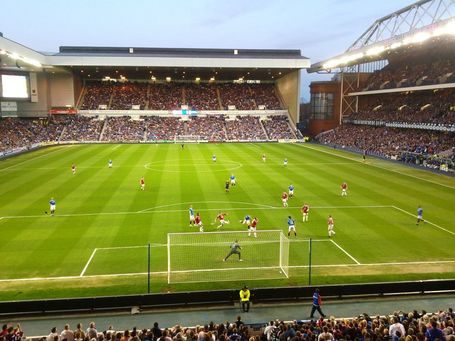 It was a charity match so there was a lot of exhibition football played but I was simply in awe of having Maldini & Baresi playing in front of my eyes and this will genuinely be a moment I will treasure forever. I noted that as Baresi was subbed during the match he passed the captains armband to Maldini and gave him an affectionate hug which was nice to see. I had to pinch myself at the sight of Boban & Papin running up and down the pitch and spent the whole match sitting grinning like an idiot, pure joy!

The match finished 1-0 to Rangers although I did get to see Massaro score a goal that was deemed offside, a decision that was warmly welcomed by the Rangers keeper Andy Goram! Its not often you get a chance to meet someone you have idolised for the best part of 20+ years and take it from me, if you ever get the chance to do something similar, make a point of going all out to meet them as its totally totally totally worth it!