Yesterday I was able to enjoy the match with my old friend and podcast co-host Chad. This is usually a treat because different geographical location requires us to text during Milan matches, but it appears texting is the better option because Milan remains win less when Chad is in town! Sorry Chad…

Reading comments when Milan drops points is a real adventure. You have the usual irrational nonsense, the self-flogging fans, and the occasional insightful response and true to form yesterday was no different, but I think while there are some serious problems, the team and Coach deserve a bit more credit in preserving the point. The immediate reaction to this match is one of disappointment. Disappointment that Milan didn’t win, or take advantage of dropped point from Juventus and Udinese, but considering the circumstances I will gladly take one point over none, which could have easily been the result yesterday. 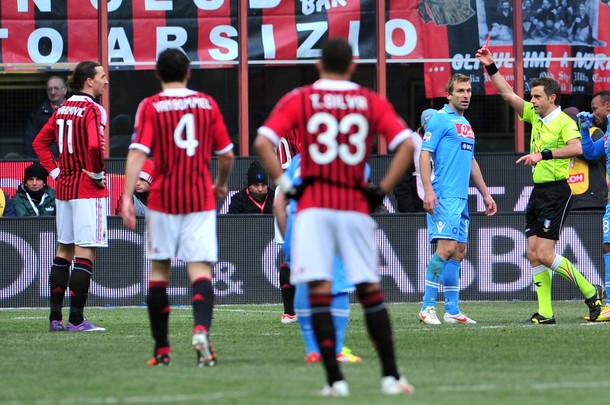 First and foremost there is simply no excuse for Zlatan’s behavior. Busy month of February or not, no player should lose their cool in a pressure cooker of a match, during a passage of play where Milan were clearly the better side. These matches are always heated and the rivalry is intense, not to mention there are a handful of Napoli players who deserve slapping, but a goal and a win would have been hurt more than ten cheap shots on a big mouthed defender. I won’t even mention the ridiculousness of the slap and how it was hidden across Nocerino, if Nocerino had been wrongly carded it would have been a far worse problem, but not carding Aronica or DeSanctis was also a failure in my opinion. Now, like last season, Milan will go about a long stretch without Ibra. Last season many were worried, but the team showed it could win without the influential big man, time to show that again. 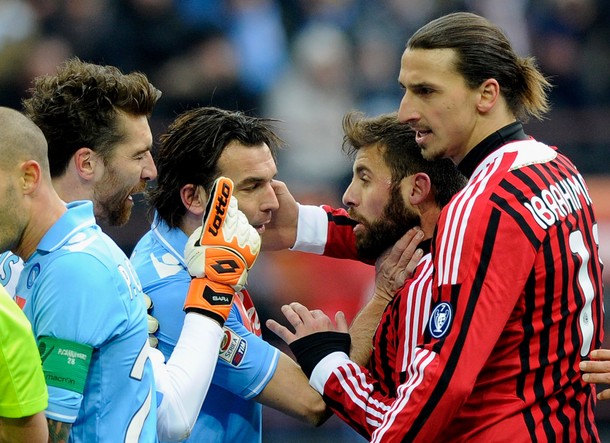 Another point is to hit out on the criticism received by Allegri. To be honest Milan were the better side this match, and a goal was on the horizon before the red card, it was only a matter of time. Sure Robinho missed a brilliant chance, but we can discuss that later, the point being is Milan were in control. In fact they coped very well with Napoli’s width, and despite Napoli defending with a brick of 5 players at the top of the 18 yard box Milan continued to pressure getting the ball into good areas and creating chances. Seedorf was not the savior many expected as they called for him against Lazio, he simply wasn’t effective at finding the passes and breaking down the defense. He could have easily helped in exploiting the space in behind the wingbacks, but then again the whole team could have. It appeared the player’s once again failed to recognize and exploit the weakness of the opponent. In the end it didn’t matter much because we lost out on the momentum of the match and Allegri played it safe leaving Maxi Lopez alone up top and defending the point. Any pragmatic Coach would have done the same thing in a title race, preserve the point you have over chasing the ones you don’t.

For me the issue is still one of depth and personnel. Sure injuries are a factor, and fatigue looks to be setting in early in this busy month. But without the proper players in the midfield this team will struggle because there is a lack of tactical balance both offensively and defensively depending on who is deployed. Is it an excuse, not really, I don’t like excuses, but as fans cry for a Plan B you have to ask how or where that plan is going to from? Changing formations wily-nily or debuting further youth team players is not the answer here. From a simple stand point the players called on need to play better. In the absence of Aquilani, Prince, and Merkel, players like Urby and Ambrosini need to step and perform and the fact of the matter is they have not. Couple this with a poor run of a form from Robinho and lack of a real second striker option outside of El Shaarawi and the lack of options continue. 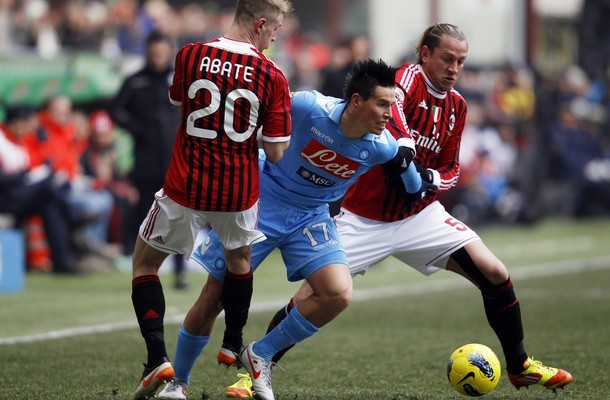 Feel free to be disappointed, but not at Allegri or the result, instead direct it at Zlatan or the players who simply aren’t rising to the challenge. This was never going to be an easy month, one point out of the first two matches is a poor start, but the month continues. If you didn’t abandon ship following the loss to Lazio, and your still hanging on now, congrats, you have earned my respect. Now let’s get behind this team, Zlatan has three games, the rest of the guys need to step up and frankly so do the fans. We have a Wednesday visit from an Old Lady to start preparing for.