No Zlatan, no problem. Yes, the opponent was Cesena, a team struggling to not only score goals but prevent them as well, but yesterday’s first half performance was clinical. For Allegri and Milan it was a statement that they could in fact retain the momentum from Wednesday’s Champions League match, and prove that while injuries have decimated this team, players are ready to step up and being counted. 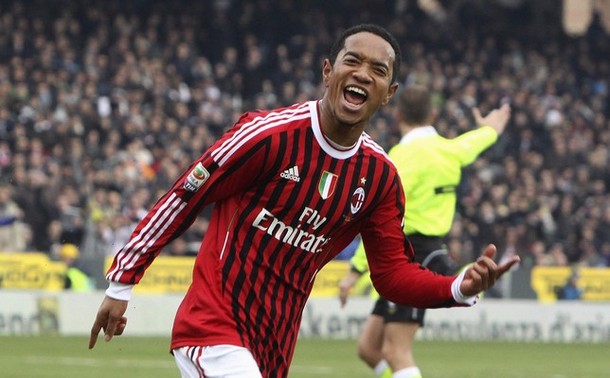 Urby Emanuelson was one such player. His interchange and goal were clinical and while his role as a CAM has been inconsistent to say the least, this match was one of his best. His play at RM had been much better as of late, making it easy for Allegri to put him on the team sheet at a time where there are very few other options, but on this day his return to CAM was just impressive. Can he be a vice Boateng? I actually prefer his play at RM, it allows him to use his left foot to cut inside and open his shoulders to make a pass, but in a pinch he has proven he can evolve and improve his play, a provide Allegri the versatility he craves. 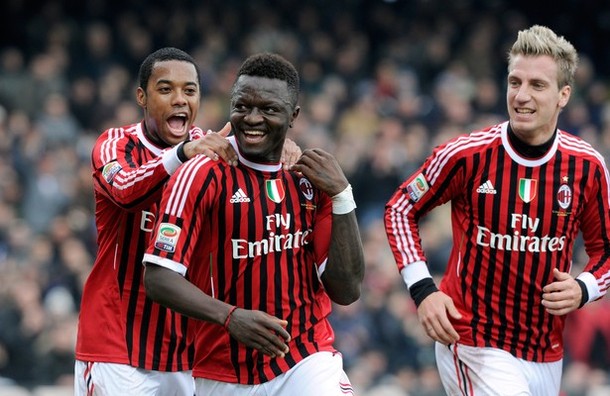 Speaking of midfielders, Muntari was also impressive. To say many Milan fans vilified him was an understatement; in fact I still get harassing tweets claiming he is “merda.” I simply asked he be judged when he played, and it was a great first impression. Within 30 minutes he had nearly five shots on goal, a few great tackles, a yellow card, and his name on the score sheet. Not a bad debut, and one that served many a Milan fan a slice of humble pie. He will never be the prettiest of footballers, but in Allegri’s system, where hard work is prized, he is just the piece of the puzzle Milan needs and may even be the answer to the aging problem at CDM. Say what you like it about him now, I prefer to continue to let his play to do the talking.

Robinho also got on the scoresheet, making it three in his last two matches. A little bit of confidence has gone a long way, but truth be told the work of Lopez and Urby off the ball gave Robinho acres of space to play into. Sure it doesn’t help that outside of a strong midfielder in Parolo, a player Milan should tracking, and two strikers in Mutu and Iaquinta, this team really struggled to defend and Milan put on a show in the first half. It begged the question again, was Milan that good or Cesena that bad? For me it is always a bit of both, Milan took advantage of what was given to them and neutralized any forays forward. It wasn’t until later in the match when Mutu started to get more connected to the match and Milan threw away a clean sheet by conceding a meaningless goal, really the only blemish on an excellent match.

So three more goals, making it 9 in the last three matches with 3 of the 9 coming from midfielders, meaning the goal tally for Milan continues to climb with 17 different goal scorers and Allegri’s dream of no focal points continues to come to fruition. With no matches midweek the table is set for this weekend’s scudetto showdown. Should be back with a two part tactics preview, but don’t forget to enjoy Napoli and Chelsea tomorrow as well.