MIlan 4 Arsenal 0: Every Goal Means Something

Share All sharing options for: MIlan 4 Arsenal 0: Every Goal Means Something

Yesterday AC Milan scored four resounding goals, each one meaningful in and of itself. The first blast by Prince, after an incredible touch and finish, silenced the critics. Those who said injuries didn’t matter and that Allegri had no clue, get Prince back and immediately this team is more lively, more aggressive, and more dangerous. The second goal put to bed all those who didn’t believe Robinho and Zlatan were the best attacking partnership, their movement for each other is superb and unrivaled on the roster, and they are officially Milan’s dynamic duo. The third goal silenced Robinho’s detractors, he can’t finish, he looks disinterested, does he now? It is called form and confidence, it ebbs and flows for every player and when on form he is a 30 goal potential player, and when off form, like any player, he can be dreadful. Fatigue can play a role, but when it mattered he came to play! The fourth goal was my favorite, sure it was a simple PK, but it put a sock in every EPL loving English pundit and every cynical self-loathing AC Milan fan. 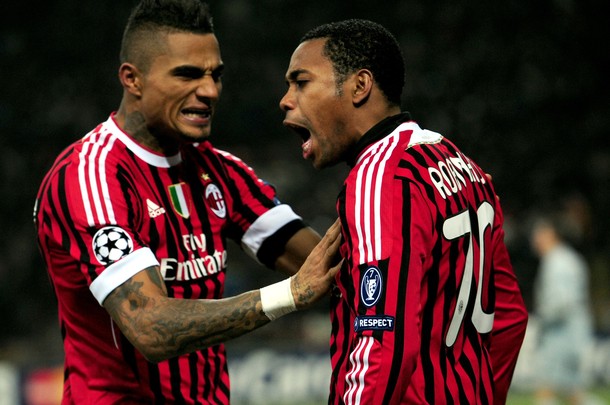 To be fair Arsenal were dreadful, I expected a whole lot more, but it does prove a point. Experience means something, and while youthful exuberance has its place, this Arsenal was far greener than the one who came to the San Siro and scored two goals in 2008, and it showed. Tentative goal keeping, miscommunications at the back and poor play in the center of the park made it a long long night for Arsenal fans. Their only bright spots were two chances, that is all, from RvP, but Abbiati was ready for the task on both. It was interesting to see fans suggest that Arsenal would sit back and soak up pressure, it is simply unlike them, and it was rather odd to seem them have the bulk of possession on the wrong side of a 4-0 scoreline. It was all true to form for Arsene Wenger, who once again, in Leonardo fashion, seems to believe that attacking football is the ONLY way to play, and then he makes his subs and instead of going for broke he actually goes attacker for attacker? Poor choices, and while he did find his usual laundry list of excuses, his summation of this being Arsenal’s poorest performance in Europe was spot on.

When you get such a poor performance it is rather natural for your opponent to look omnipotent. Sure it could have been 6-0 had it not been for some wasteful chances by rusty substitutes, but who is counting anyway? The key for me was Milan’s pressing and patience even when they didn’t have the ball. They filled in spaces, pressured when the needed to, and never let Arsenal get into dangerous areas. Yes at times they were a bit route one when they attempted to counter with pace, but more often than not, they found the space and attacked in clinical fashion. Making it easy to see why CB’s who are bit longer in the tooth make a whole lot more sense, and for Arsenal Mertesacker was sorely missed. The team was also a bit fortunate to lose Seedorf early, as he looked slow, unwilling to up the tempo, and incapable of defending. The minute he went off and Urby came on, Milan looked faster, better suited to defend, and more dangerous. No surprise this correlated directly to Arsenal’s systematic decline in every single minute of the match.

MOTM for me was a close call, Robinho’s brace, Prince’s blast and Van Bommel’s utterly simplistic performance in front of the defense were all worthy of consideration, but for me it has to go the big man. Jury is still out if he can show up consistently in Europe but Zlatan took one big step towards it last night. The assist, the consistent winning of the aerial battles, and the fearless PK made him MOTM for me! 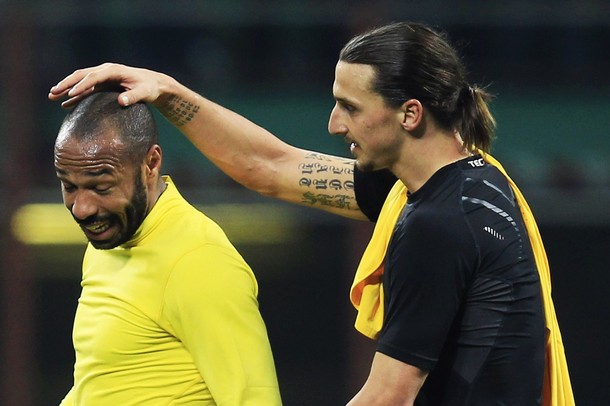 So where do we go from here? The cynical self-loathing fans will shove their heads in a hole until the next loss, fine by me; we can all use the break. The overly optimistic unrealistic fans will start etching our name in Old Big Ears, claiming WE ARE BACK, or that even Pippo could roll back the years and lead us to CL victory, UNLIKELY. In all honestly though it is best you fall right smack in the middle, we had a great performance, we put a team who showed weakness to the sword and twisted the blade. There is still work to do, and while many were quick to write off Allegri or the team, you have to believe with a healthy roster (Cassano, Aquilani, pile money in place of Pato) and a bit more depth, this team is on the right track, which is the key for me. We may not win the CL this year, but we are on the right track to returning to European glory! We may not even win the Serie A this season, but we are building, building for Financial Fair Play, building for a three to five year run and building a better Milan. If anything that is all the victory I need right now! Enjoy it while you still can, there is work to be done on the weekend!

Sidenote, thanks to everyone who participated in the live blog, can't say thank you enough. Had a blast and made the BIG win all the more enjoyable. Hoping to get one in for Cesena this Sunday as well!