A few days ago when Milan lost to Juventus I noticed something. I noticed something in Juventus that Milan had all last season, it is subtle, and the casual fan doesn't see it. The casual fan is to caught up in pretty passing and attacking movements, and that is all well and good until your kicked, battered, and your back's against the wall. What Milan had last season, and Juventus has in spades is GRINTA, that is until now...

If you visited the blog at half time on Saturday, you would have thought Milan were left for dead. Down one-nil in the Friuli Fortress, where no one team had come in and won all season. Injuries had decimated the roster and the bench, and fans not aware of this were still calling for "changes" and "Plan B's" when Plan A was barely in effect. Hope was in short supply, and support was non-existent. Unlike the fickle fans, the team simply grit their teeth and came out with a determination and force that was slow to build but ended with a bang, two goals, from a much maligned signing and a star in the making and it gave Milan new life, new hope, and the realization that things weren't great, but their is light at the end of the tunnel. 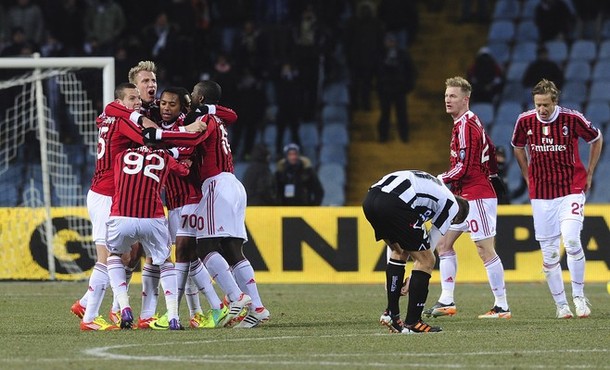 For those quick to claim a signing is not useful or not Milan caliber without getting them on the pitch, let this match be a lesson. Maxi Lopez was pivotal, and I have to believe Muntari can be just as useful when he returns, and that players should be judged not on their past, but their present and their contribution to the cause. The real story; however, has been Stephen El Sharaawi, the youngster has taken advantage of his chances, and his now two goals against Udinese this season have been crucial. For those wonder why he doesn't score goal, this is is not his forte, instead his movement and passing make him very difficult to spot for defenders and his pace makes him very dangerous. A welcome sight in the absence of Ibrahomvic and when we discuss the midweek match, the Little Pharaoh, has to be a BIG choice for Allegri.

Speaking of Allegri, he also has come under what I believe to be unwarranted scrutiny as of late. Blamed for factors beyond his control, like injuries and selections, while fans seem to disregard the fact that players are not available? On Saturday he made a questionable call to remove Nocerino in my eyes, but it paid dividends. His choice to leave Seedorf in was puzzling, who looks a man finished, but the link the midfield/defense was crucial as Milan took advantage of Guidolin's questionable move to remove DiNatale and the unfortunate injury to Isla. Ambrosini, who struggled early in the first half as Udinese won the number games in the midfield and swarmed the midfielders, was a strong presence in the second working hard to stifle attacks and apply pressure to allow time for the CB's to fill and defend. Mexes, not the most calming presence at the back, had a gritty match and assited Silva well. While Mesbah, who was maligned for his runs forward, came up big with a late block.

End of the day, Milan beat a proverbial "top team" which has been a topic of endless discussion. Scored two goals, ended this streak of poor form, built some confidence and beat Udinese at home. Nothing like a little momentum before a midweek CL tie. Are we in the clear? Not really, but a little adversity goes a long way it proving a team's mental worth and fortitude. Yes players are returning from injury and it will alleviate some pressure on those playing two matches a week, but the month is not over yet and come March when things settle down, the competition will be strong.

I want to end on a side note, mainly about the players brought in this January. The lack of support for management and transfers has been absurd of late. In January I lambasted Pato who after four years has scored goals yes, but shown little progress as a player both on and off the pitch. It was in my opinion that his sale was better the team and fund purchases that management claimed could be made with the money. The sale didn't happen and buys were done on the cheap, which leads us to recognize that Milan is not flushed with cash and that money doesn't grow on trees at Milanello. A point that many should recognize sooner rather than later. My point is I waited four years to make this determination on Pato, after observation, discussion, and consideration. I was then told to be more "patient" that I was being hasty to judge, yet our new signings like Mesbah, Lopez and Muntari are being judged in FOUR MATCHES or before they even get on the pitch!? Yet I am the one being hasty!? Bit hypocritical no? Many of you judged Van Bommel, Cassano and Urby the same way last year and they all contributed, have you not learned from your own mistakes? I will end there, but at the end of the day I stand by the decisions I make, you should be prepared to stand by yours as well.

Back tomorrow and Wednesday with a two pronged Arsenal preview and a very special guest...