It certainly wasn’t the most resounding win or performance, but sometimes you have to win ugly. In fact titles are built on winning ugly, and while Cagliari may not be the "big scalp" that so many crave, the three points in this match are just as important as any other and scoring three goals to boot isn’t all that bad. Even better is the fact that this game was played at a pace that allowed Milan to relax and not expend to much energy as the run of fixture in the next few weeks is rough. 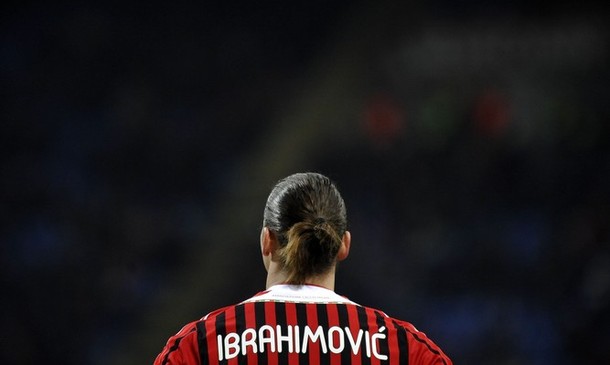 Once again it was the Zlatan show, a goal, an assist and a ten minute rest were all he needed to assure Milan another win. Say what you want about him in big games, he may not win them for you, but he certainly makes sure you win the rest. His performances of late have to put him into the higher echelon of World strikers and his willingness to work both on and off the ball make him such an asset that not building around and working with him would be criminal. Let’s be honest his goal was incredible, you almost knew it was going in the minute it left his foot, but more importantly was the little touch onto Nocerino that led to the second goal and buried the match in favor of AC Milan.

Speaking of important players Nocerino continues to prove his worth with another goal, and the fact that he is never rested is becoming alarming, but he is so crucial it must be hard for Allegri to find those spots. Thankfully he is supremely fit and seems to run endlessly, but a few minutes here or there wouldn’t hurt. Goals from the midfield this season are now a norm and are a testament to Allegri’s tactics and the industry from the strikers. Ambrosini also got in on the act, scoring his first since 2010, and his presence on the defense side of the ball assured that Cagliari really were down for the count. 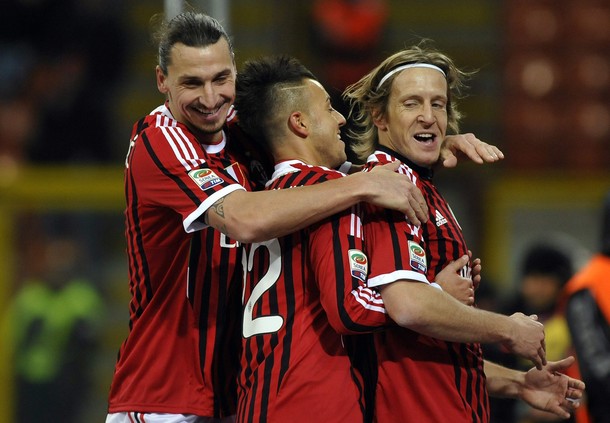 You have to wonder what Ballardini was thinking in this match, at times Cagliari had the upper hand pressing well and winning the ball in the midfield, but they never appeared dangerous in creating chances. Ibarbo, Cosu, and even Astori were offensive threats, but once Ballardini starting sub off his stronger players this match was a walk about. Fine by me, and for Milan, but a bit puzzling if you are a Cagliari supporter. Ballardini was not the only one guilty of puzzling moves, Allegri’s decision to sub Seedorf and Binho with Lazio on the horizon was a bit odd. But I guess it depends on his plans for midweek, which we will discuss more tomorrow. I felt he should have run those two into the ground and called on El Shaarawi and Ambrosini midweek, but time will tell if his decision was sound.

He did decide to give Pippo ten minutes in what I believe could be a final curtain call on his Milan career. Many wanted to see new signing Maxi Lopez, but if this is it for Pippo so be it. Fans will get teary eyed I am sure, but there is no reason to. Pirlo was sent packing for the good of the TEAM, and the same can be said for Inzaghi. Allegri has come in and made tough decisions making older players earn their keep on short contracts, and Pippo should be no different. These are/were loyal servants and soldiers, but in Pippo’s case his time has passed, so best of luck of to him wherever he goes, or even if he stays, he just needs to respect the vision and path Allegri is taking with this team. Especially with the continued progression of El Shaarawi who was an instant game changer with a cracking chance off a corner and great off the ball work in the few minutes of match time he had before the game truly slowed down.

A new signing that did get a full 90 was Mesbah. I have to admit it is nice to see a no- nonsense left back with a left foot, but he is not the type of player who set the World on fire. Solid, tactically sound, and a decent engine he should help solidify the left back position, but Milan should have a LB on the shopping list for depth and grooming. His crosses did appear Oddo-esque at times, but his willingness to work alone will make up for the occasional errant ball across. Mexes was also given a full 90 to assure Silva is fit for midweek, but he still makes nervous. He often reacts slowly forcing a reckless challenge on the ball, sure he occasionally wins them in exciting fashion, but you can see why he has been branded a walking red card. Not the strongest mental sense for a CB, but even a on the ball he can be hasty and a bit brash. I can see why some fans like this swashbuckling defending, but personally I would prefer a CB who looks like a swashbuckler in Yepes, but plays like he has a head on his soldiers.

A solid no frills win, and while some will surely call it boring or mundane, it is absolutely necessary over the course of a long season. Not to mention, a win is a win is a win, if you think your team winning is boring, then maybe you are rooting for the wrong team or watching the wrong sport, try alternatives like darts or perhaps table tennis I hear the action is fairly non-stop. Be sure to check in tomorrow for a rundown of the upcoming wild fixture list and Allegri’s Mission Scudetto.