So here I was planning to write a tongue in cheek post about the Milan way and finding the hard road to beating Novara, but then I read this. Seeing Maldini's words made my stomach sink, and after last week's failure to cash in because of "family ties" you have to wonder what is going on in the front office of this Club. You have a Club legend, loyal servant and incredible talent who needed no hype, no fanfare, and brought nothing but success and professionalism to this Club seemingly finding it difficult to make his way into the front office. Yet a child gets the benefit of the doubt, for simply falling on top of the Owner's daughter, at a Club loss of 35M Euros!? Simply put,this is disgusting...

I have been told of late to speak less of Pato, so I won't mention his stellar tap in on a great piece of work from Robinho and movement from El Shaarawi. I also I won't discuss his hyper awareness to move from the wall leading to the Novara equalizer or excellent effort on his errant free kicks, or the fact that he may in fact have found a way to get injured. I will let that all slide, in fact rightfully so, as I said yesterday in the comments. A goal in a Coppa match is just enough to zip my lips on the matter, I bow graciously down at the alter of Duck.

On to more serious matters, and what was really the surprise of the match, was the maturity shown by El Shaarawi and Merkel who were seemingly given carte blanche by Allegri to assert themselves on the opponent, and that they did. It helped to be surrounded by time tested match veterans like Pippo, Ambro, and Nesta but these boys did what you ask of any young player, they kept it clean and simple and made it count when they could. El Shaarawi being the more offensive and dynamic of the two could have scored three goals by half-time, but the one he took was excellent and forcing a save from Fontana soon after. Every time he touched the ball the crowd was electric, showing his skills and composure that justified his purchase. 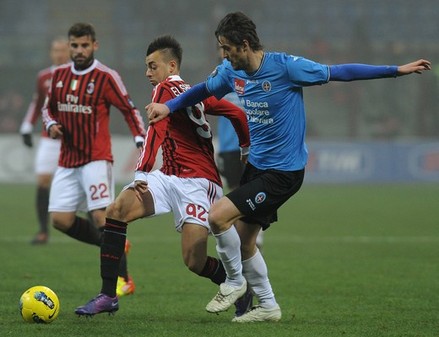 Now with that said it is important to cool expectation for both players, this was an opponent, that outside of a free kick debacle and error by Milan, saw little of the ball and did even less to exert themselves on the match. This was Milan's game to lose and in true Milan fashion they made it difficult. You have to believe after watching Urby at CAM yet again that the experiment is over, and I would much rather give him a go at LB or LM then CAM ever again. He drifted wide, never checked to the ball and often occupied the same space as Antonini, in fact so much so that Antonini looked more like a midfielder cutting and distributing then Urby did. For long stretches Milan struggled to press the ball in the opponents half because of this and was susceptible to losing the numbers battle in the midfield.

Allegri was not blind to this issue and his inclusion of Pato and Robinho was well thought out. I am sure many were happy to see Pippo in action in this one, and while he was his old cagey self in creating chances he lacked the pace and match fitness to make a real difference or even get on the end of some passes, sadly we have seen the end of a legend before our very eyes, and I hope this lays to rest this idea that he still has a proper first team place. I know it is difficult at times to come to this realizations, but we are seeing it firsthand. It was Robinho who was once again the little engine that could, helping to create the goal but also to spark attacks and moves forward combining with El Sharaawi. Many will continue to chastise his missed chances, but he did more off the ball and in build up in his time then Urby did. Defensively Milan was also solid, but Abate's inclusion gave us more coming forward as Bonera seemed to defend more from the right side in the first half while Antonini attacked. 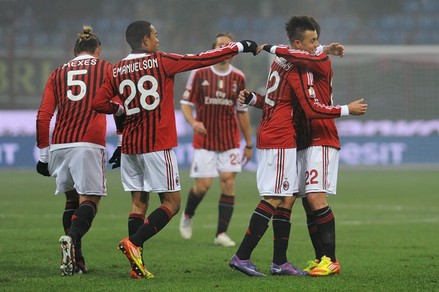 All and all a decent match and one to remember for Merkel and El Sharaawi. But continually letting weaker opponents find footholds in matches through set pieces is a failure of this team for two years running. Something Allegri must truly consider and solve as points become even more valuable against weaker teams. Had Milan taken three goals into half time the free kick would have been forgotten, but this was not the case and it also wasn't the first time we have seen this happen. Milan are now through to the quarterfinals of the Coppa Italia and while some have come out and said they would rather win one CL then three scudetti, or that the Coppa means nothing, I have to disagree. This Coppa is important to this team and their progressive rebuilding. We may not yet be strong enough to win the CL, but we can prove that a domestic double is the next step to success, and if the Scudetto eludes us this season, which it may, then at least we will and should fight for something. The rebirth of Milan under Allegri will not happen overnight, it will take time, and in that time it will take success where it can be found, and the Coppa is just the ticket.

We play Novara on the weekend, and while I may preview the match, I think those who found the time to watch the game yesterday over the Copa Del Rey Clasico, will have found some points about Novara that should help destroy them on the weekend.