So Avais and I have been discussing Pato at length in emails, and he wanted to post his thoughts. I figured before we tackle Novara we can tackle a, "A Problem Called Pato," special thanks to Avia for writing an excellent piece! 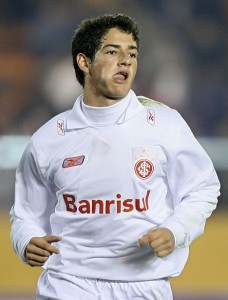 When Milan signed Alexandre Pato from Internacional at the tender age of 17 the new signing was so young that he couldn’t even play for the club which had whisked him to the other side of the world. He was hidden away in training and it was during this enforced seclusion that rumours of a “wonderkid” started to ebb out of Milanello. Milanista scoured the internet and youtube to find out what they could, meanwhile epic stories were regaled by Fester & Berlusconi who had the fans salivating with tales of what this kid was accomplishing behind closed doors, they marvelled at how they had found the new Van Basten!

“Over 30 goals a season!” they proclaimed rather excitedly but the exuberance was tempered by the ever cool Clarence Seedorf who mused that although the boy might be young and skilful he doesn’t need the pressure placed on his narrow frame that playing for such an illustrious club brings with it and that he should be allowed to develop, class as always Clarence, class.

That was 5 seasons ago and since then Pato has slowly made a name for himself in Serie A having scored 60 goals in total averaging 12 goals a season and some of them quite important ones. For anyone who is more than just a casual admirer this would be attributed to the lack of playing time Pato has endured due to injuries throughout the course of his career.

Now to some, this is just unfortunate but to others this is becoming bothersome as it feels never-ending. Frankly, its all about perception. To you he is either unlucky and WOULD be scoring 30+ goals a season for Milan if it wasn’t for his visits to the MilanLab ® or he is a kid who will ALWAYS endure injuries limiting his playing chances over the course of most seasons. Another example is sometimes when he has the ball he is unlucky and is closed down forcefully by a defender but to others he simply didn’t bother to look up and see that he was running straight at aforementioned defender. 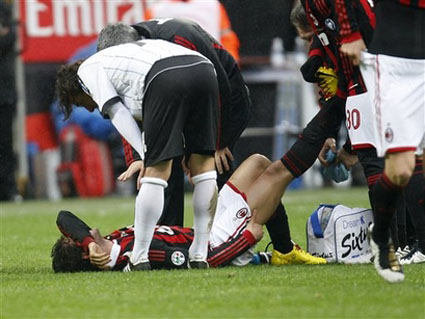 Its true when some say “he’s had to live with changing mangers” and found it challenging to adjust to what is being asked of him but then a simple reply to that could just as easily be “how many managers will it take Pato to find a way that actually suits him?” so far he’s on his 3rd and not yet hitting 20+ goals, like I said, its about your perception.

Recently there has been epic and heartfelt discussion regarding Pato during the Tevez saga. What this brought to the fore was the far-ranging views on Pato held by my fellow Milan Offsiders and found it intriguing how the differing opinions intertangled and wanted to see whether or not I could help my fellow Milanista understand one another. 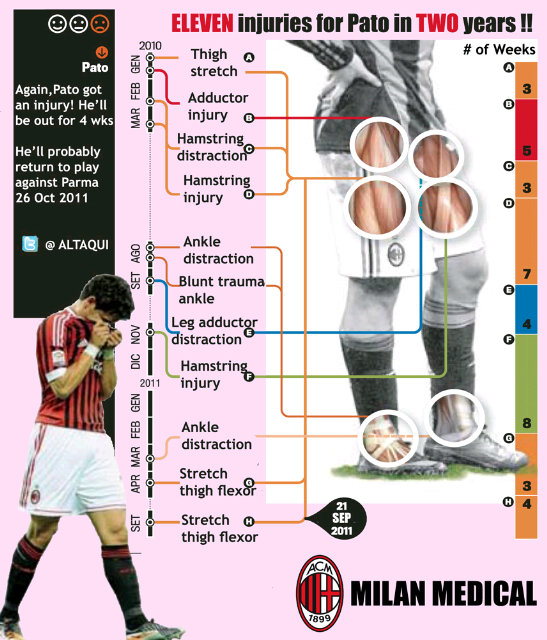 At the risk of getting all scientific on you all I’ve created Avia’s Pato scale © which I will now attempt to use to illustrate how Pato fans could be classified:

1 = He is a MUST keep as he will live out the Prophecy as foretold by Sages Fester & Berlu. The team should be built around him

2 = Keep him as he is still young, needs to improve to make the grade and might live up to his billing

4 = Milan wont get much more out of Pato, sell soon before his stock collapses

5 = The kid is stillborn and needs to make way for a Shev Mk1 replacement ASAP. The kid cant integrate, wont develop

Now I’m hoping that you can recognise yourself in the above scale? Good. I hope this also allows you to understand your fellow Milanista regarding their opposing views on Pato.

I need to confess that I can slide between 1 and 5 (and that’s just during the course of one match!). Another confession, I used to be a 2! To me Pato was a kid that would slowly take the mantle of former greats such as Shev & the mercurial Van Basten but I have given up believing that some time ago, even with time I don’t think he will come anywhere near close and definitely not the calibre of striker to build your team around.

Another issue is that fact that Ibra & Pato don’t seem to gel together and one of the reasons that cost us the derby. I’m not for a second suggesting the result was Pato’s fault, imo the majority of our team were poor. Now you can say what you want about Ibra but for me the guy simply brings more to the table than Pato. As for his once sublime finishing skills, Pato just appeared to do his best Robinho impression with near panicky swipes anytime he came close to the ball. For all the stats that are waved around he looked lost and nothing close to the “wonderkid” he is still perceived to be.

Was it over excitement? Maybe he was trying too hard to prove a point? Regardless, the much vaunted kid is currently killing his impressive stats that some fans cling to and the more game time Allegri is giving him the more his shine is coming off.

But with Pato doing a U turn and forcing Fester to have to beat a hasty retreat from the gloomly climes of Manchester he has nailed his colours to the mast. He has come out and said, “No, I want to stay here and prove I can be great”. Now I might currently be a 4 on the above scale but cant help respect him for it but at the same time I harbour feelings of “You had better watch your ass kid” because I for one will be an almighty angry 5 if in 2-3 seasons time we realise that we should have shipped you when it better suited us!