Share All sharing options for: Visiting an Old Friend

Every year as Milan fans we get treated to two matches against the Old Lady, Juventus, and yes I said treated. Over the years Juventus has been a fixture in my mind as one of the Premier teams in Serie A. Sure they have never really made it big in Europe and even had a little problem with match fixing, but like it or not Juventus is one of the big guns. Seeing them in Serie B, and then watching them flounder last season, has left them battered and bruised, and a spending spree this summer didn’t seem to really address the needs of a team with a lot of players, a new Coach, and a bit of inconsistency. No matter how you look at it, this is still Juventus, we are still traveling, and when we get there an old friend will be waiting to say hello. 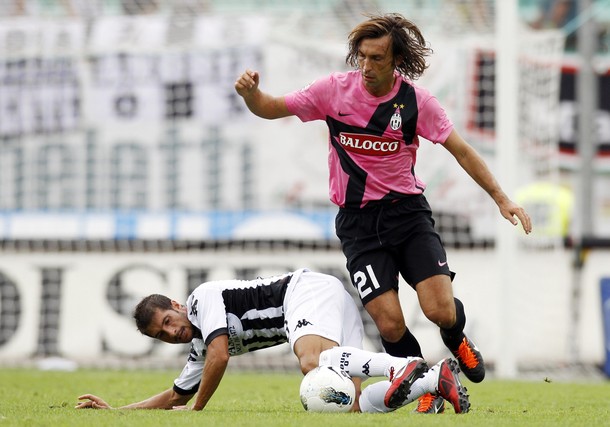 Nice thing about meeting old friends is that nobody quite knows them better than you do. So if Pirlo is what is making Juventus tick from the midfield at the moment, then what better way to stifle Juventus then by stifling Pirlo. Conte has been using Marchisio as Pirlo’s body guard, as Carletto did with Rino and Ambro, so if Milan can apply pressure on one or both Juventus should struggle to get the ball into wide areas and be dangerous. Another issue that concerns me is unlike most teams in Italy, Juventus does play with true wingers, and this can shock some narrow minded teams like Milan. It will most likely pin the fullbacks back, but can also create acres of space for a guy like Abate working on Krasic. It simply becomes a turf war of who can get forward and back faster than the other, an intriguing battle for the weekend.

So the game plan, stuff Pirlo, and take space wide when you can get it. Always so easy when you write it down, the lineup on the other hand still has some injuries and some tired legs but here is what I think:

So let me explain, Taiwo may get exposed by Pepe on the flank so better Zambro who may lack pace, but should be wily enough to dispose of Pepe. I also gave Seedorf a rest because he can come in if needed in this match, but more importantly he has logged a ton of minutes and it isn’t even November yet. He was crawling on Wednesday and I think should be rested, but Allegri most likely won’t agree. That’s why I threw Urby in with Aquilani. What better way for Aquilani to prove a point then showing Juventus what they are missing? Urby’s work rate may be just what Zambro needs to help with Pepe and pester Pirlo/Marchisio along with Nocerino. Cassano and Zlatan’s choice speak for themselves.
So come Sunday, we stop Pirlo and we come home from Torino with three points. Always easier said than done and with Juventus at the top of table this early in the season these three points put us level, if we can earn them!

-Anyone else wish Pirlo could feel a Rino tackle? While I have no hard feelings towards Pirlo for what he did and his leaving the Club, I just think he should feel what Rino can do...

-After four games no team in Serie A has max points, you thought last year was close, this year may be that much closer.