Share All sharing options for: Milan 1 Udinese 1: Ring the Alarm?

No, not yet. I am not about to abandon ship, and neither should you. Sure the team looked listless, sluggish, and once again disjointed from front to back, and while I don’t believe in making excuses, this team is not the true first eleven. It is unfair to sit here and cry about the current situation when the team is simply not at full strength. For the record, it doesn’t mean the players on the pitch shouldn’t put in the hard work and the effort to uphold the Milan way, but rest assured Allegri will know who he can trust when the team is at full strength and the season progresses.

It is no secret; I have a soft spot for Udinese. I like the way they are run as a Club, how they play the game, and their tactics. However, when the chips are down I want them destroyed but today’s Milan was simply not capable of anything, even the goal from the “Little Pharaoh” was more of a slap than a knockout punch but at this point I will take it. Three games, two points but take a deep breath, the season is far from over.

Much like the Napoli match the team the team looked sluggish from top to bottom. There were certainly flashes of brilliance, pace and possession but the common theme was simply to slow and sloppy. Even the tried and true Abbiati was guilty of a dida-easter but redeemed himself with a spectacular save to preserve a point that arguably may not have been deserved. The lack of consistency in play by everyone on the pitch is the most frustrating, every player capable of magic, but the tempo of the match or lack thereof just isn’t conducive to success and Allegri has to really turn the screws to get this team back to where it should be.

No surprise that the injury crisis continues, with Pato going off early with a hamstring injury. Even less surprising is that Pato is injured again. I don’t mean to pick on him relentlessly but defending him is getting harder and harder every match. Even when he was healthy early on he looked to be playing to the beat of a different drum, and his chemistry, or lack thereof, with Cassano is clear as day. In all their minutes together the Duck has only scored once, and it is apparent that Zlatan and Robinho are sorely missed. Aquilani also is struggling from a lack of consistency but more importantly he looks tactically lost, sometimes too far from the strikers other times to far from the midfield, he needs to be busier in that role and allowing Seedorf some space. Seedorf also deserves a bit of flack, while he can still hit some pin point pretty passes, he sometimes over complicates the play to the point of confusion for his teammates let alone myself.

Now it wasn’t all negative, both Emanuelson and El Shaarawi made a strong case for starts next match, their tempo was better but both players are wasteful in possession, something that wasn’t even a concern last season. It was also nice to see Pippo back on the pitch, but his match fitness will take some time to find and but his first goal will go a long way in fixing that. 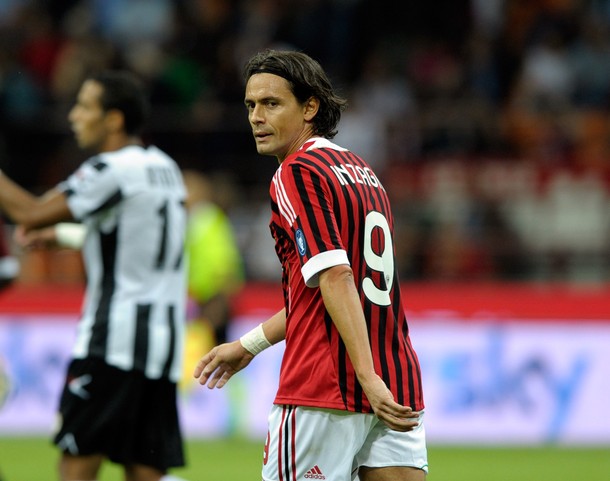 Clearly Allegri and squad have some issues, defensively there are problems with communication and it is clear the midfield is not doing the job it did last year in stifling the opponent’s possession. For all the hemming and hawing we heard in the off season about Rino and Ambro being old and past it, those two may be a sight for sore eyes, and no pun intended but with Rino’s ocular injury he will be lucky to see the pitch again this year…really I didn’t mean to keep jabbing with the puns, I promise. In all honesty it’s a terrible injury to Rino and I wish him the best not just in footballing sense but his own health as well. Bottom line, please don’t go throwing in the towel for the season already, it’s too early to panic, and there is time for a good team to find it’s legs once again I promise. Look on the bright side we could be in an Inter-esque crisis and your efforts are better spent wishing for a bum Coach for the nerazzuri then worrying about Milan!