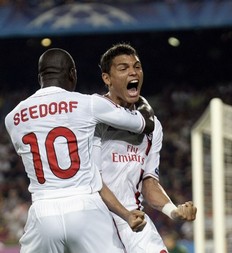 What can I say that probably hasn't already been said about yesterdays performance? On a night where both teams were missing key players, Milan was able to steal a point late and do it with a terrific defensive performance.

It was a fast start to the game for Milan with what may be the goal of the year (Yes it is only September and a bit of a stretch, but the explosiveness of the run and clinical finish were simply brilliant). Pato was a handful nearly every time he touched the ball, testing the two back up center backs early and often. Hopefully this a sign of what is to come from Pato as he was more physical, determined and still blazingly fast with the ball at his feet. As the game settled in Barcelona took over but Milan always seemed comfortable defending. Outside of Messi who was a handful all night and really trying to take the game over, Milan handled the Barcelona attack very well. Defensively they were organized and held their shape for the whole game. There were plenty of chances for Barcelona (although it seemed like most came from Messi) including a gifted FK in one of the sweetest spots on the pitch thanks to a head-scratching tackle by Cassano which Villa converted. It wasn't a vicious challenge but there is just no reason to bump a guy to the ground from behind in that spot; it is incomprehensible and why most people seem to tire of Cassano quickly.

As the game wore on though you started to get the feeling that it was just going to take a little bit of luck in the form of a set piece or a lucky bounce. It came late in the game, very late, on a wonderfully executed corner which landed Milan a draw in their opening game of the CL. Silva rose above the rest to bury it and put a cherry on top of his night which was a masterful defensive game (Nesta as well). It was a gritty performance by Milan and one that every fan should be proud of. Out gunned and on enemy turf, Milan showed up and took a point in a game where they lacked any real ambition or creativity going forward. Like a great boxer, they absorbed blows and when the time was right took advantage of an opening. One thing is clear to me, this team can be very dangerous in the CL when they get healthy. Well done. 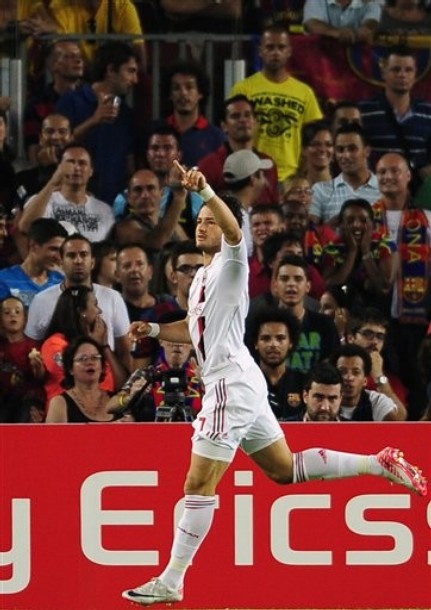