Share All sharing options for: Milan 2 Lazio 2, A tale of two halves 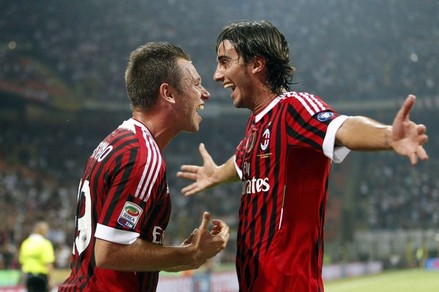 As the title suggests we had two very different halves in this game. In the first half, it was wide open with Milan really not playing well at all yet still equalizing after falling behind 2-0 early and going into the half tied. The second half Milan tightened up and dominated. They created chances left and right, and really never dealt with much outside of one quality chance for Cisse that was dealt with by Nesta. Speaking of Nesta it seemed like the announcers Paul Visca and Max Patrick who Fox Soccer's feed uses, were writing his Football obituary. He made that play and a few other quality stops after but it was clear in the first half he was dragging a bit and looking a tad lost on the early goals. Klose had a beautiful take and finish on the goal seemingly confusing Nesta as to what he was going to do with the ball, causing him to spin around allowing Klose to take the ball and bury it. On the second goal it was a beautiful little pass into the box finding Cisse who took a free header and put it into the net as he and Klose criss-crossed in the box which seemed to confuse Abate and Nesta as to who had who.

The first half as mentioned was not very good for Milan but yet they scored two very nice goals. I think we are going to see a lot of that first goal throughout the season. Aquilani with a nice little over the top ball into Cassano, who unselfishly slipped it to a wide open Ibrahimovic for a tap in. Milan have plenty of players that could be inserted into that little triangle all season long to score very similar looking goals given the quality of the attacking options. The second goal Cassano scored on the corner, Lazio was caught sleeping and credit goes to Cassano for getting open and putting it on net with a dipping header. Outside of that though, Milan looked a bit confused and sluggish in the first half. Many fans on this blog had concerns over the midfield going into the season and early on Milan justified those allowing Lazio far too much space to move the ball. It doesn't take a good team to create quality goal scoring chances when they have that much space and time on the ball, and a team of Lazio's caliber showed they can take care of those chances. Milan sat back and paid the price. It has to be said though when Van Bommel came on the game changed a bit as he and Ambro formed a very cohesive partnership in the midfield denying Lazio that space and time on the ball we saw early in the game. I think Allegri was saving him for the Barcelona game much like Pato but sometimes your plans change as the game goes on and both were used. 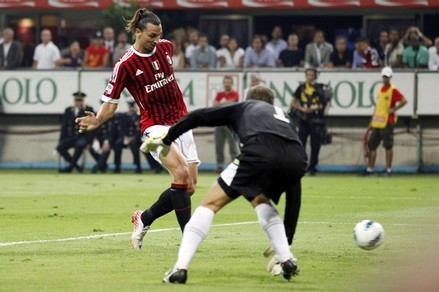 I am sure a lot here including myself are disappointed with the result only being a draw, but with some quality players missing that will be a key part of Milan's season, we should keep in mind there were plenty of positives to draw from this game especially playing against what should be a very good Lazio team this year. Being able to come back and take points from a game you fall behind 2-0 in very early is something that an elite team needs to be able to do. Cassano also for all the faults and criticisms he drew from the announcers had a major hand in both goals, and pretty much was the focal point of most of Milan's many chances in the second half. You could argue he was Man of the Match despite some of his overly sloppy or selfish play in the game. But, as a fan you never want to see your team dominate a half like the second and not be able to finish. Especially not with the Barcelona game coming up here next, but with the quality on this team, it shouldn't take long to hit their full stride.

I told Gianfranco who I want to thank for allowing me to take over for him while he is gone, that I would keep it somewhat short but I clearly have not done that; so I will finally open it up to you guys to discuss in the comments. For starters I am wondering your thoughts on the line up, Antonini's play, and of course Cassano. But take it where you want as always! First I am going to once again shamelessly plug his Season Preview that was posted over at goal.com which if you didn't get a chance to see I posted in the comments on the last thread, click on the goal.com link and enjoy.