It’s hard to sit down here and write a proper recap when we have just been crowned 2011 SCUDETTO CHAMPIONS!!! I simply can’t get tired of reading that. For some it is your first, and very special, for others it is three, four, or even five…but as I have preached for weeks now they are all special. This one means a bit more to some because it came out of nothing, with no expectations, and the last time that happened was 99 and ushered in a new era of Milan, let’s hope that happens again!!

I will plainly admit, I would have rather gotten all three points, and done it the right way. But the draw was all we needed, and Roma fans should be pleased to at least get a point to help their CL ambitions. Milan was the better team on the day, and for all but 20 minutes of the first half they were in the driver’s seat. Three good chances in the second half, and shot off the upright were all that stood between Milan and all the spoils. Well it also helped that Abbiati put in another stellar performance and naming him MOTM is easy. Stuffing Vucinic on the doorstep is all that needs to be said.

It is hard not to start putting the whole season into perspective, but I think with a match upcoming midweek against Palermo it is important to celebrate but in such a way that leads us to the fortress in Palermo with the goal of a domestic double. Not sure about you, but celebrating a Title was nice, celebrating a double is surely better! Allegri has his work cut out for him against a tricky opponent, in a trickier stadium for AC Milan. The bench is deep and he has options, and with strong performances from Ambro and Robinho among others, I have faith he will put his best team forward to keep the momentum going.

The second half display of possession was excellent, and a testament to what Milan has been able to do all season long, keep a clean sheet and keep opponents off the ball. Short, simple passes, and good movement were key on this day, and while the finishing product wasn’t there I have to say I never felt like the game was tipping out of Milan’s favor. While I can sit here and continue to discuss Roma issues or Milan’s successes I will simply sit back on the fact that we are CHAMPIONS. There will be plenty of time to discuss the season and everything that went on with it, but for now let’s simply enjoy the moment! 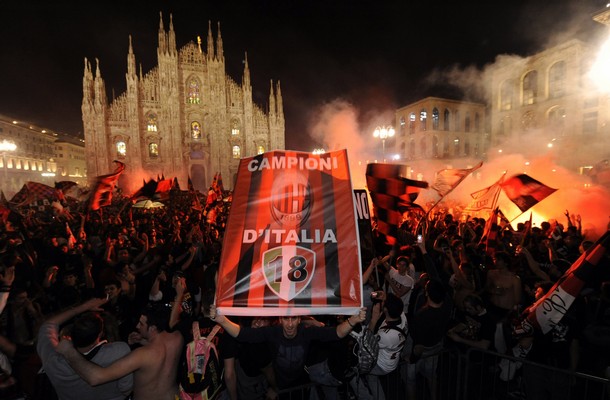