Serie A is notorious for subtle little favors, and I think today we witnessed one. I wasn’t sure, but seeing Robinho pull up on an easy 1 v 1 on Handonovic seemed to confirm my suspicious. To be perfectly honest, Udinese isn’t Roma, and for a team who plays some of the best football in Serie A, I can’t really argue, especially with Milan having nothing to play favor. I just hope Udinese makes good on their trip to CL football, and don’t sell off all their stars, keeping the core together and try to make a solid run. There is only one star I am concerned with, and that is Asamoah. The nice things about favors, is eventually they get paid back...

Allegri’s lineup was curious today, I felt like we should have seen Pirlo, but I can understand why he wouldn’t want to play in a meaningless game away from the San Siro. Better to be safe and healthy, then endure some fluke injury, and with that he leaves Milan almost as quietly as he arrived. But there was in fact quite a roar in the middle, to the tune of a few CL's and a WC, and for that I will be forever thankful. Not even a Pippo sighting on this day, but watching Amelia, in a MOTM performance, and possibly playing for a job next season was entertaining. He may not stay at Milan, but at this point it would be a prudent piece of business for Milan to buy up the rest of him and sell for a profit. He can be prone to some blunders, none of them horrific, but today showed how good he can be when he is on his game, always reminded me of Peruzzi, and too bad Abbiati is such a beast! Funny two seasons ago we were dealing with Kalac and Dida, oh how nicely things can change. 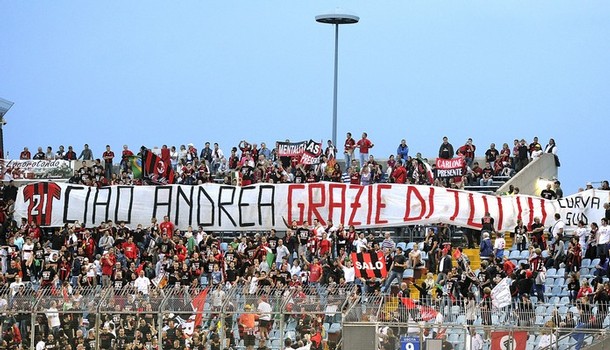 The other big surprise was Didac Vila, and while I can’t wait to see all the “praise” and people saying how "great" he was the only thing I am going to reply was that he wasn’t he terrible. He clearly has a lot to learn, tactically he got sucked in to the middle on a few occasions and a few close calls from Udinese were on his shoulders, but again he wasn’t terrible. My biggest gripe with a 21 year old like Vila, is more personal than anything else. Why not groom De Vito for the same job? It helps Milan, the youth players, and the National team setup if De Vito makes the cut, just puzzling sometime how truly ignorant Clubs in every Country can be to their own youth. Now, don’t all freak out at once, I am not condemning Vila, but I am not ready to jump on any bandwagons either. His performance speaks for itself; a few mistakes, a few solid runs forward but nothing more to write home about.

Another thing I noticed from Allegri today was his choice to use Pato and Cassano. While neither looked to have their foot truly on the gas, they did link well and their ability to move into channels and create space for themselves and each other was intriguing. We have seen lots of attack combinations this year, but it looks more and more like playing Binho with Zlatan, and Pato with Cassano makes the most sense. Early reports say Pato did in fact get injured, a dislocated shoulder, which leads me to one final point. Are his injuries, all kinds of them now, becoming a true worry? Is he going to be injury prone for the rest of his career, can he play a full season? Maybe it is best Milan keeps the striker depth solely for reasons such as this one, with Pato getting hurt every 10-15 games and Zlatan and Cassano capable of being banned for a handful of games, maybe we need all the strikers we can get!?

I am going to end on that note, there is a laundry list of topics to discuss this off season, but after soccer filled weekend and a podcast on the horizon, it is time for a little break. I am going to catch my breath, enjoy the Scudetto and get ready for the impending silly season. Transfer rumors, players coming and going, and everything else under the sun that comes with summer will truly keep us busy, in the meantime rest easy knowing we are Scudetto Champions, with work still be done, because true Champions never rest! Look on the bright side, 79 days until we defend the Title!