I watched the celebrations again, watched part of the match again. The goals, the applause, the standing ovations, it is almost as though I know in my heart that if I stop watching it I face the reality of what comes after it. It is no secret changes are in order, and I keep subconsciously delaying a real post and discussion about them, and frankly today won’t be that day either. There will be ample time in the dog days of summer to discuss every potential resigning and transfer, to discuss the merits of Pirlo, Seedorf, and Amborsini. To discuss simply with whom this team should move forward. I won’t say much on the topic now, I am still in celebration mode, but I will say something that I will contain to believe and adamantly argue in favor of. Certain members of this team are indispensable, the same way in the late nineties the fixtures of Maldini, Albertini, and Costacurta were imperative to our present and future. It was those players who passed the torch to the likes of Ambrosini, Gattuso, and Abbiati. Now we stand with those players poised to continue the Milan tradition, and to see some willing to give that away is shameful. Call them old, call them senators, I don’t care, but they truly represent AC Milan and with them we move forward, and without we simply we won’t. But enough on that, a few things to recap on the Victory Lap Match! 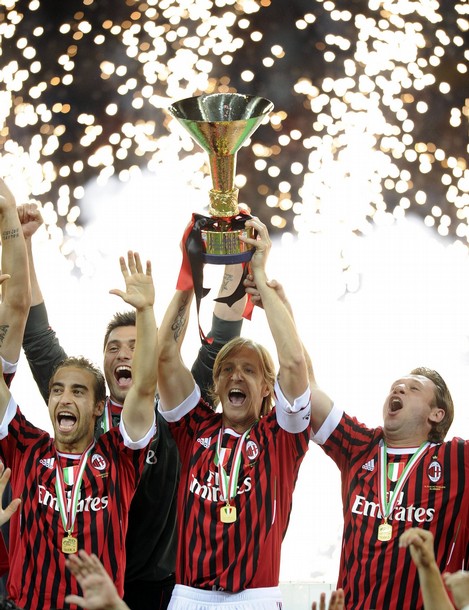 Was a bit surprised to see the lineup rolled out by Allegri, pre match I felt the players who merited a start and minutes were those that were lynchpins on the road to the title. I can’t argue with his choices but not seeing Van Bommel, Zlatan, Nesta and Prince play a part was bit odd. Injuries, fatigue, preparation for a moon walk are all very valid excuses, and I am sure all players were rewarded with their celebrations. The game itself was over by the 35th minute with a second Rino goal of the season sandwiched by a Robinho double. Odd to see Robinho finish in nice fashion, yes in a pressure less match, but if he can find this form throughout a season his potential to score 20-25 goals is almost certain. Seedorf rounded out the scoring, deservedly so on an incisive pretty run, which summed up much of Milan’s play. Sharp, fast, and with good movement. Cagliari but up little to no fight, but Milan showed class in all areas and never once dogged it around the pitch.

The match took a turn for the emotional as the substitutions began with Pirlo stepping onto the pitch for the final 45 minutes, what could be the final 45 minutes of his Milan career at the San Siro. Again, I won’t discuss much if he should stay or go, but I am having no shame in reiterating his importance to the game, the team and the National team. To see some fans attempt to use “stats” to quantify Andrea Pirlo goes to show just how truly misunderstood and under appreciated a player he truly is. Soon after Rino was subbed to a rousing ovation in favor a Flamini, not Van Bommel or Cassano, but again I can’t argue with Allegri who had his reasons. But the largest cheer was reserved for Pippo’s return to the pitch, like thunder he entered, but he couldn’t find the lightning though he looked poised to score. It didn’t matter; in the end the goal was already achieved. 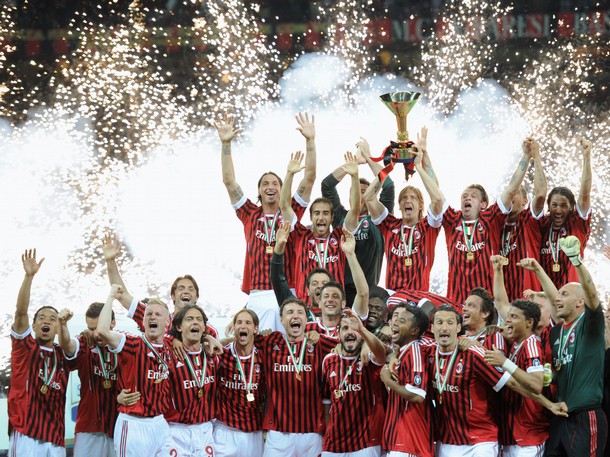 There is still another match to play, a trip to Udinese, who are fighting for CL football and much to talk about in the coming weeks and months, but I want to reserve this week to honor the season. Enjoy the last post, the videos and celebrations, and post your own below as well. Take a minute to remember a part of the season you enjoyed, was it the Derby, the dominance of Napoli, the nail biter with Juventus, or the run of wins to end 2010. Whatever it is it was special to you, in a season to remember. We didn’t win the double, but we can’t complain, simply something for next season’s to do list. I leave with you the voice of AC Milan…