No sense in lying, I am caught in two minds on this one. First thought simply being that we just won the Scudetto, and how can I be upset at the fact that we got hands on some silverware this season. This is made easier knowing that we were not wronged by the result; we were comprehensively outplayed and soundly beaten by Palermo over the course of two legs. Let’s be clear, we were beaten by the better team, and to call Palermo Milan’s kryptonite, black swan, or bogey team is an understatement. We simply can’t win in Sicily and knowing that fact should have been motivation enough for this team to whip Palermo at the San Siro, that didn’t happen, and in the end we got what we deserved.

Now my second thought is steeped in immense frustration, and little bit of embarrassment. What kind of Champions are we? Champions wouldn’t have conceded four goals over the course of two legs, something that Milan didn’t do all season. Champions would not screw up simple marking duties on a corner kick, a problem I thought we had been rid of since the last Palermo match. Champions don’t dominate possession 75 to 25 in the first half and come away empty handed. I am not mad, I am just frustrated. Frustrated in knowing that despite being crowned Champions of Italy this team still has work to do, so please enjoy the Scudetto, everyone deserves it. But this team should not rest, should not pat itself on the back, but should be poised to move forward in the off-season getting better in every respect, and with Allegri in charge I feel like we can do this. I want a dynasty, not a flash in the pan, and this loss should be the catalyst for everyone to believe this is possible from top to bottom.

Now back to Palermo for a moment, three games against them in 2011, two losses and draw. This team may have it’s issues, but when they bring it, THEY BRING IT. They soaked up pressure like Rocky against Clubber Lang, and came out swinging so hard in the second half Milan had absolutely no answer. It didn’t help that Seedorf and Pirlo offered little to nothing on defense, and Pato was back to his old ghostly self. Even Robinho’s workrate wasn’t enough to cover for three players who didn’t seem to want to match the effort of the rest of the team on the other side of the ball. Nocerino was stellar, and I can’t help but wonder how much he would progress and grow on a team like Milan. But it wasn’t just him, Ilicic, Hernandez, and Miglaccio were all over the place and Cassani and Balza pinned Milan back in the second half cutting off any chance of a counter. Credit to Delio Rossi for getting these guys going, and I can hope only we lost to the future Coppa Italia winners. 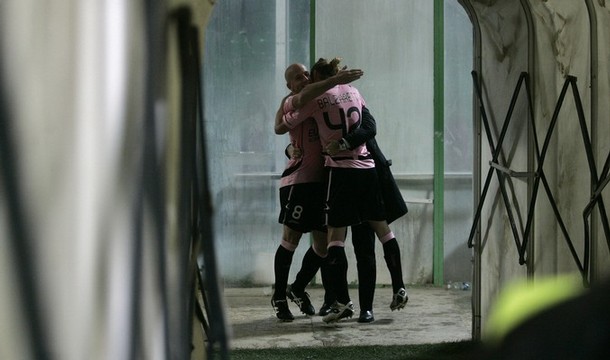 In the end, part of this performance rests on Allegri, but the players as well for being guilty of a celebratory hangover. I understand why Allegri chose the formation he did, he needed goals, but he also needed the composure of Seedorf and Pirlo on the ball to make sure Palermo didn’t see any of it. It worked in the first half and had Milan picked up a goal or two this conversation would be moot, but they didn’t and Allegri didn’t adjust to the game like Rossi did. Cassano, a player hungry to prove himself, needed to come on sooner for an ineffective Pato. Zlatan was also ten minutes to twenty minutes to late, but again this is hindsight and a point made more on what happened then what could have been. In the end Milan simply didn’t earn a win, something they are more than capable of doing, just not today.

Funny little tidbit to end on, Milan have NEVER won a domestic double, looks like Allegri can put that up on the locker room wall next season for a little motivation…