An absolutely perfect start from Pato, at just 45 seconds in I was jumping for joy in my living room. To be able to score the first goal, and so early put Milan in the driver’s seat and gave this match an end as magical as the start.

After deliberating over the match and lineup for about week here on the blog, then seeing Allegri turn to Seedorf in Pirlo’s creative role and using KPB behind the strikers many of us were vindicated and the result was well worth it. Sure Leo’s suicidal 4-2-1-3 and foolishly high defensive line had something to do with it, but Milan didn’t rest for a second and kept the tempo at a blistering pace and never really let Inter ever gain a foothold in the match. Had Robinho brought his finishing boots instead of his diving boots and the horseshoe fallen out of Julio Cesar’s rear this game could have easily been a 7 goal shellacking of epic proportion. Leo may have learned something, but it’s clear he still doesn’t do so hot in the bright lights.

I personally like the fact that Leo was flat out embarrassed, I never had any doubts that we got the better man for the job in Max Allegri, but never I did a it would be such a dismantling. Yes, Abbiati made a game changing save, but for long stretches in the second half even before Chivu’s foolish Red Card (apparently once a Roman always a Roman) Milan were dominating the midfield, fluid in attack, and stifling in defense. It was this sort of front to back performance that this team is very capable of and only needs to find the consistent to put it on the pitch game in and game out. 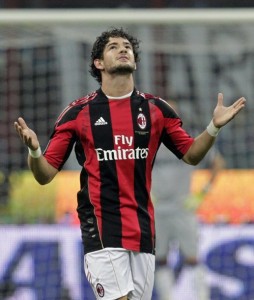 Pato, for many was man of the match, and with two goals rightfully so. His passing still leaves a lot to be desired but the fact that he was trying to pass was a huge plus, but more impressive was his willingness to simply shred Leo’s absurd high defensive line! I mean what was he thinking, doesn’t he know Pato can kill you with pace, even if he was playing an offside trap, it only takes one diagonal run, one well placed through ball, or one missed call to flatten such a silly system. It worked to perfection as only Chivu could Pato off his hat-trick on this day. As mentioned earlier Robinho had a slew of chances, and a lot of credit has to be given to his off the ball movement, he was simply IMPOSSIBLE to mark. It sure helped that KPB was winning the ball in great areas and the more simple his passes the more dangerous Milan became. Just imagine for a moment if Sneijder was playing behind Pato and Robinho on the proper side of Milan, this team would win the CL!

One of the keys to the match was Milan’s dominance in the midfield, at times Rino and Van Bommel looked like three players and their ability to get the ball to Clarence further reinforces the need for a passing body in that 3 man line and Clarence was very well up to the task. So much so in fact that even he got in the act of defending and was responsible for many Milan counters and possession changes. Both Rino and Van Bommel even managed to exploit midfield space to interchange and join the attack. Choking off any Inter service forward and pressuring the back line kept Milan in the driver’s seat for almost the entirety of the match save a few scary moments in which the defense stepped up big. Abate was again simply stellar, his pace advantage over Zanetti was exploited time and time again and in the right moments never exposing Milan in the back, the mark of a true RB. Even a shaky day from Zambro was easily glossed over with Silva and Nesta back to their stellar selves. Three goals to the good, a five point lead at the top, and sweep of the Derby this season puts an ear to ear smile on my face still to this moment. While I have to admit the season is not over quite yet, someone has to pass the memo to Napoli, Milan firmly has their destiny in their own hands and if they can’t see this one out, then they only have themselves to blame, I have a funny feeling a bit of momentum after this glorious win will go a long way; time to bury the competition and start thinking about a nice little domestic double.

So what did we learn…

1. Leo still doesn’t have a clue. I mean what was he thinking? Milan essentially has a four man midfield to his two and he thought he could win the game? How? Inability to recognize a problem an address it remains his biggest issue, good luck at Inter you filthy traitor.
2. Allegri gets it, and when the team is back to full fitness you have to believe we can make some noise for a few years in Italy and get back to winning what we know best, the CL.
3. This team has a handful of pieces to build on for the future, Silva and Abate in the back. Pato and KPB, integrate a few more key components and the rebuilding of Milan is happening before our very eyes without being mired in poor seasons, well done Fester, well done.
4. We can play without Zlatan, and the reason is always movement, on and off the ball. If Zlatan can fit into the fluidity this team can only improve.
5. Robinho couldn’t finish on an empty net…not sure what the deal is.
6. Cassano is still an idiot, he probably got his ass kicked by a one legged Rino.

Back Thursday with a hodge-podge tactics piece, so many little topics to cover from this match, may as well throw it into one big post. In the meantime enjoy this one, it was a statement game and after being embarrassed twice last season, it feels good to be back to where we belong. 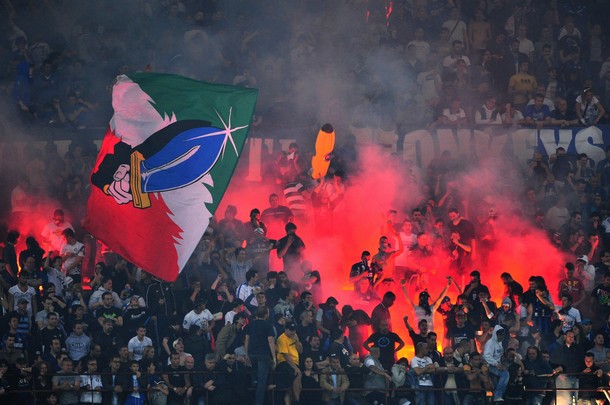