Milan 2 Palermo 2, There is Still Hope

Share All sharing options for: Milan 2 Palermo 2, There is Still Hope

Sometimes you just want to enjoy a game that is wide open and exciting, but often times it doesn’t go the way you want it to. Attacking football may make good TV, but it doesn’t make for good results for AC Milan. An uncharacteristically sloppy defensive performance gives the advantage to Palermo as Milan need to travel the fortress of the Renzo Barbera looking for the away win to advance to the Final of the Coppa Italia.

Allegri didn’t exactly play a weaker lineup, and while it may not have been a first choice lineup, playing Zlatan, Cassano, and Prince is no easy task for any opponent. The real gripe I had with this team was Allegri’s choice to go away from his standard three man midfield and choosing to play Seedorf and Pirlo, his first mistake, and ultimately the reason Palermo had some space to operate in the midfield. The inclusion of Emanuelson, fresh off the birth of his son, provided some balance but also paid dividends with a goal for the new daddy akin to Cassano on the weekend. I am sure Allegri learned his lesson and we probably won’t see the likes of Clarence and Pirlo on the pitch in the same jersey again. 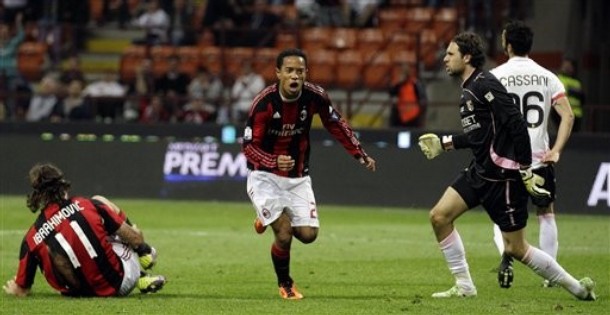 No surprise that a backline featuring Sokratis conceded goals, and having a puzzlingly un-confident Amelia between the sticks didn’t help either. For those asking for patience on Sokratis, or challenging my claims that he should be sent back to Genoa, can I have some reprieve now? When I see a player like Sokratis, I can’t ask for patience, or time to develop, because he simply lacks the tactics and positioning to be a quality CB in the future. When you see a young CB, they either have the fundamentals down or they don’t, if they don’t, walk away, if they do then you can develop and grow. Sokratis doesn’t. It didn’t help that Flamini was back to his old headless chicken-self, and credit to Palermo for exposing the space created, but more importantly winning the midfield battle to earn the 2-2 result. 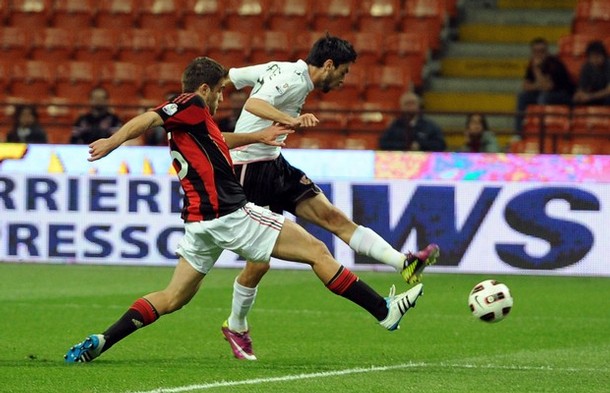 Sirigu was also once again on top of his game, stuffing Antonini early in the second half, Pirlo late and Zlatan on a few occasions. It was not that Milan lacked chances or played poorly, but when you don’t command the midfield as this team often does, you give the opponent chances and Palermo took them very well. A bit more unnerving for me was this return to long ball play as the match wore on and the fixture of hoofing balls to Zlatan was back after weeks without it, thankfully this won’t be an issue in the league with Zlatan suspended, and while the Big Swede looked game, with a great goal and assist, there is no reason why the team can’t play more fluidly with him on the pitch.

So with a trip to Brescia on the weekend, all is not lost in the Coppa Italia, but if this team wants to win the domestic double they will have to do it the hard way as they decided a few weeks ago as the dropped points in the league. I don’t expect many drastic changes from Allegri against a relegation zone team, but there can’t be any let up. Brescia wants/needs the points just as much as Milan and that should be on the team’s mind as they take the pitch and for Allegri as he puts out this potential lineup:

I can’t see dropping Prince, unless he absolutely needs a break, and playing Pirlo in the play maker role to rest Seedorf while protecting the backline with Rino and Van Bommel may give Milan a goal outburst like the weekend. The Coppa draw is a bump in the road but a correctable won, the focus now must be on three more points in the Scudetto race, and earning 9 out of the possible 21 in the first three games will inch the title that much closer.