The stats don’t really tell the whole story of the utter domination of Sampdoria on this day. As sad as this sounds it isn’t hard to see how bad Samp’s problems really are. A lack of real tactics, a poor formation, and the use of players who don’t seem to keen on proving themselves makes this a team almost destined for Serie B. A true fall from grace but a team who knows how to fight back, Garrone needs to take a good hard look at what he has done to a very solid Club. But the key to this is Milan took full advantage of the blood in the water and simply played Sampdoria off the pitch in defense, attack, and a possession performance analogous to the likes of Barcelona with simple patient passing and everyone checking to the ball and working for each other, mark of a Champion? I think so. 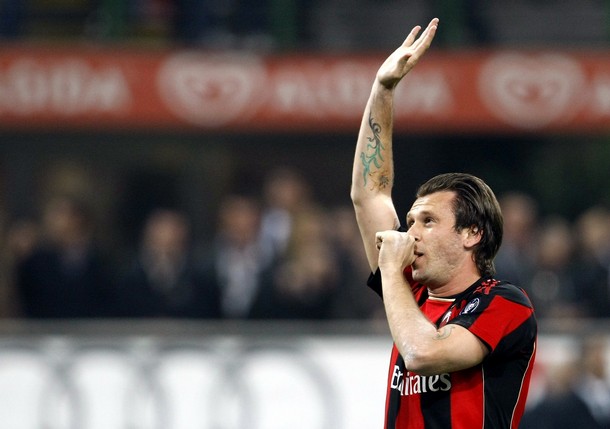 The day for me belonged to Fantonio, please take nothing from solid performances from Seedorf, Robinho, and Prince, but coming in off the bench and really working to put himself in great places gave Milan the edge they needed after the first goal. Having welcomed his new son into the World and staying up with him for a supposed 48 hours, his sluggishness was evident, and his tired eyes easy to see but a great PK a cheeky assist, and a chance for two goals had it not been for Curci, this game would have been the Cassano show in the second half. Coming off the bench and getting into the game in great fashion was just awesome to see, he is happy at Milan and it is starting to show. Four goals for Milan, a handful of assists, and this buy is looking better and better with Pato’s injury and Zlatan’s disciplinary issues.

The injuries were a bit worrying, and with Pato out for around 10-14 days and news still pending as I write on Abbiati, I have to admit the win becomes bittersweet. Losing key players down the stretch is never good so I have to sit here and hope for the best. It feels like this team has not been at full strength once all season and as Ambro and Pirlo get healthy it stinks to possibly lose two more key players. Again, I am hoping for the best, but I believe Allegri has everyone ready to contribute and I hope for the news is good in the coming days. Pirlo got a solid 25 minute run out and played simple as Allegri shifted Seedorf forward to CAM and Prince back to LM to protect the midfield maestro, and simply having that flexibility is a gift Milan need to cherish this season and into the future. 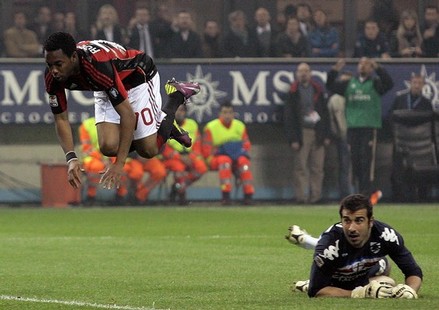 Even Robinho got into the act, and this was good to see as we need him to finish his chances with Zlatan and Pato out, and his interchange with Cassano was very nice as the similarities of the players made me wonder if it was possible. Sure he scored an easy one, and missed a one on one with the keeper, but the guy is always in great spots and you have to believe a three goal outburst is in the cards for him before the end of the season. Defensively Milan were simply stellar and with width coming from the right in excellent fashion it protects Zambro and keeps the team dynamic in attack. Watching Abate win a corner, crank in a cross, and be the last defender all in the same play is incredible and I know we talk about it often but the RB position is officially locked down. 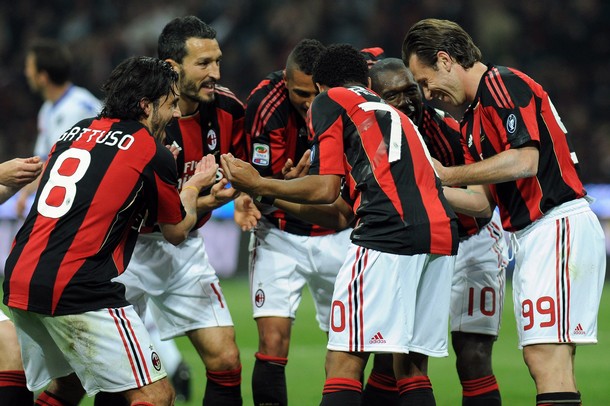 All and all an impressive win despite some bad news, but the team took advantage of the situation as it should and with 6 points out of a possible 21 from the last seven matches is a great start for the march on the title. Being away for a week was tough, I missed Milan, but getting treated to win a like this on my return and watching Parma dismantle Leo’s Inter to the cheers of the crowd was icing on the cake. All eyes on Napoli Udinese and by the time this posts we will know the result of that match as well. I do want to end on an odd note, I know many of you switched to El Clasico, and I heard mixed comments that the match was boring. But the shear amount of tactical pressing football was incredible to watch, and while the match always provides a bit of excitement, looking at the Serie A table and how exciting this season has been, you don’t need to go anywhere else for quality football!