As I wrap up a second viewing of this match here on Sunday morning, I have to say the glut of afternoon and Saturday matches makes me miss watching the match right out of bed at 9AM EST! What I did get from a second viewing though was confirmation that this match was the quintessential away performance in what was a potentially challenging match. I have to admit it was hard to watch the absolutely disjointed play of Juventus, and the lack of any final ball in the attacking third goes to show you that every team goes through spells of difficulty in the attacking phases. Sans Aquilani and ADP, Juventus had to rely on the wings and Del Neri didn’t do his homework from Milan's performance against Napoli. He could have potentially inverted his wingers allowing them to come inside, but again this wasn't the case and Allegri and AC Milan came prepared for the second match in row, and in the process readying for a trip to White Hart Lane. 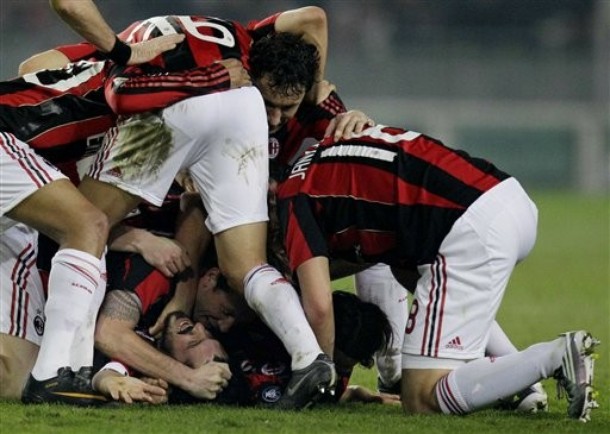 It is funny to think that a team with Cassano, Zlatan, and Robinho on the pitch needed a goal from Rino Gattuso to win the match, but when Rino scores it is certainly a special occasion. He doesn’t do it often, but his play following his emotional explosion against Tottenham has been nothing short of tenacious, inspirational, and vintage Rino. A man of the match performance that few can argue with! The goal was nothing special, and frankly Buffon should have done better, but it goes to show that Juventus from top to bottom is in a bit of a funk. Unfortunate for them, but for Milan to go in and turn the screws on a team in trouble was just what a title contending team does. Juventus seemed to play for something like 25 minutes in this match and Milan simply played tactically intelligent, smart in possession and kept Juventus off the ball and out of dangerous areas.

Allegri did well to duplicate the team’s effort against Napoli and while Janks was a bit of a weak spot the rest of the team, especially the bull dog midfield worked wonders. Defensively Milan was stellar with Silva and Nesta continuing one of the strongest partnerships in Serie A. In attack Milan had their chances, Zlatan was marked very well by Chiellini, and Del Neri’s choice to move him into the center to frustrate Zlatan was about all he got right on the day. Cassano and Robinho found ways to be dangerous, but just couldn’t find the back of the net against a team who looked more than content to simply defend.

Abate continues to be impressive in his work behind Rino, and his ability to overlap continues to be excellent. With Prandelli in attendance Milan’s RB has to get a fair shake, and the rest of Europe is starting to take notice at what many of us already have seen, this kid is growing into the real deal in front of our very eyes. Flamini was also once again solid, and will most likely play a key role midweek. When he plays simple and doesn’t over think things getting forward he plays a much smarter and controlled game as he is not flying all over chasing like a headless chicken. Van Bommel also did well managing the midfield though his fouling was a bit cumbersome early on. 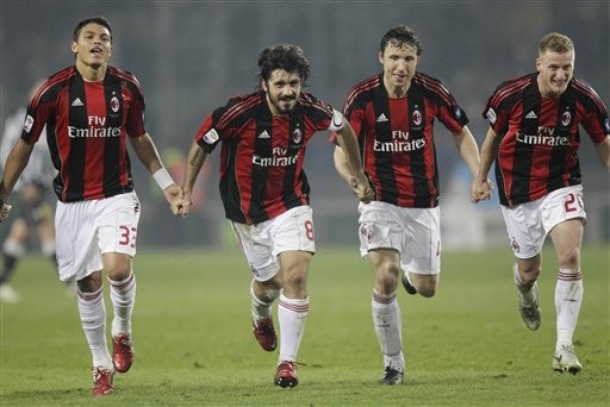 With three point won and some ground gained on Napoli this was the right step for the trip to Tottenham midweek in a must win match. Milan are clearly the underdog, but I like that moniker, if they go and play loose and find a way to continue this tactical awareness and off the ball work the personnel won’t matter, but the result certainly will. Allegri chose to use Seedorf, a puzzling choice, but hopefully this was to rest others for midweek and Seedorf won’t see much of the pitch, but this is still up for debate and something to be discussed as the match approaches. In the end take nothing away from this match, it was a very important three points, it wasn’t the prettiest or the most definitive, but these three points may very well prove crucial in Milan’s title run. Inter continues to be a threat and with the Derby looming this Scudetto is far from won.