Share All sharing options for: Juventus - Milan: An Italian Classic

With the big game coming up on Saturday, we thought we would have some friendly discussion while we are all still speaking. So bloggers from the Juventus Offside, The Milan Offside and the new Milan Obsession blogs have each taken a few minutes to answer the same five questions in this collaborative post. You will find a different sampling of their answers at each blog, so feel free to visit each one to get them all and to join in the discussion! 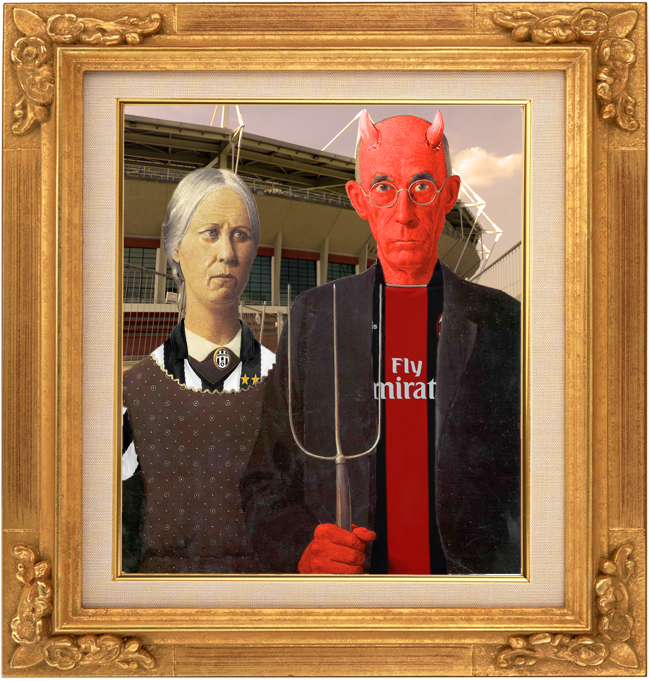 1) Which of your team’s player(s) will make the biggest difference for this matchup? Which player(s) from the opposition will cause your team the most trouble?

Elaine: Bonera. So long as he is not on the pitch, we stand a good chance at winning. And for the opposition, again, Bonera. If he is playing, he will be playing against us. (Although De Ceglie will certainly be grateful that Bonera is actually injured!)

Roberto:
Defending will be of the utmost importance against Milan, so it will be Chiellini who’s in a position to make the biggest difference for Juventus come Saturday. Speaking of position, hopefully Giorgio will find himself back in a central role as Bonucci’s recent dip in presence will provide the Bianconeri with no help against any one of the Rossoneri’s attacking weapons, especially the mercenary Zlatan Ibrahimovic.

Aaron: Giorgio Chiellini is by far the most important player this week. And most important is where he plays, if he's put out on the left again, Barzagli-Bonucci will have to step it up big time. The problem is both are decent center-backs, but neither are the kind that clean up for others mistakes, too. Giorgio does that. As for Milan? One player in particular doesn't really jump out, I guess Zlatan, but he's been a bit off form, doesn't show up for big games, and Giorgio has his number. (I may regret writing that)

2) Both teams have dropped points since the beginning of the calendar year. Which team do you think is most likely to step it up for this game? Explain.

Jovan:
Call me biased, but I think, even though both teams will make that extra derby effort, that Milan will be more motivated to keep the cushion at the top of the table than Juve will be to please their half-empty stadium of supporters. If Juve scores first, it could work for them but if Milan scores early I wouldn't be surprised if the night ended tragically for Del Neri.

Jorid:
Believe it or not, I pick Juventus to win this one. I'm not as crazy or biased as I may sound, although this Juve of late is a real mess, Delneri's team has played very well against the big boys this season and I can see an angry Juve scraping a 1-0 victory in a similar fashion to the game against inter. Either I get this one completely right, or I will end up being way off, it will be interesting to see.

3) Both teams have been plagued by injuries this season. If you could have one player back for this match who is out injured, who would it be?

Elaine:
Super Pippo. The guy is a brilliant goalscorer and his passion is infectious, just what is needed for a big game.

Jorid:
My choice is Fabio Quagliarella, followed very closely by Paolo De Ceglie. The former scored a very nice goal in the andata match, played a great game while sacrificing for the team and was having a fantastic season that would have easily seen him well in the double digits of goals scored by now, had it not been for his nearly season-ending injury against Parma. A mobile seconda punta that Juve is dearly missing at the moment. De Ceglie on the other hand, had shown significant signs of improvement in both phases of play prior to his injury. His athleticism and crossing ability are assets that could have greatly helped Juventus' cause for Saturday's match and it's unfortunate that Juve's roster does not contain another left back of similar attributes. Chiellini is far better as a center back, while Traore and Grosso are worthless amoebas.

4) Putting only tactics head to head, which coach do you think would take this match, Del Neri or Allegri? Why?

Jovan:
If you asked me this question a few years ago, I'd say Del Neri without a second thought but I've been disappointed with what he's done with the squad available to him in Juve. The 4-4-2 doesn't work, and his lack of will to change it has been one of the causes of Juve's downfall this season. Allegri on the other hand has managed to build a system that fits the players available and motivate players to work for the team. Allegri wins, hands down.

Hugh:
In general, in terms of tactical nouce, I'd give it to Del Neri. BUT, Del Neri has a few problems ahead of this particular match and hasn't made the best decisions in the last few weeks. Firstly, he's got to pick the players up and get them concentrated and motivated, arguably not his forte. Secondly, he has experimented a little since the new year in an attempt to get the team playing well again but most experiments have failed, be that his or the players fault. Because of this I think his hands are tied to some extent so I'd give Allegri the advantage.

5) Juventus won this matchup at the San Siro in October and are now playing at home. Do you think they will sweep this fixture? Your final score prediction?

Gianfranco:
I NEVER predict scores, it always takes a bit of luck, but more often than not I end looking foolish. As I said earlier title winning teams don’t lose to the same team twice in one season, and good teams which I can safely say I believe Milan to be don’t lose to the same team twice period. This match has 0-0 draw written all over it, not sure why, but I am just of the mind that neither team will come out swinging. Historically Milan – Juve games have always been entertaining either in the form of an offensive slugfest or a cagey draw, should be a good one regardless. As always utmost respect to the Old Lady but this year’s scudetto belongs to Milan so step out of the way!!!

Aaron: We won't roll over, but Milan has the momentum and the quality. No predictions from me.

Hugh:
Home advantage and previous encounters count nothing for Juve at the moment and Juve will certainly not sweep this fixture. I'm trying hard to remain positive but it gets harder every week. If Chiellini moves back to the centre we may be able to hold out but with our attacking play being what it is at the moment and Aquilani injured, it's hard to see where a Juventus goal will come from. Final score : 0-0, I think both teams would be reasonably ok with that.