An absolute uphill battle from start to finish made worse by a foolish red card. That pretty much sums up this day, and while a rest while do the moody Swede some good, the potential for a two match ban and forcing him to miss the Derby could be a potential issue. More on that later, but a draw when three points were in order, and somewhat deserved, is a big letdown in what turned out to be a relatively disappointing week.

Getting dropped from the CL was hard enough, but dropping two points at home to last place Bari in front of great Milan Legends like Van Basten, Massaro, and Maldini is just rubbing salt in the wound. Credit has to be given to Bari who worked an absolutely crafty training ground set piece for the goal. Par for the course Milan always seems to give teams they should beat a fighting chance with poor set piece play and marking, we say against Lecce earlier in the year and now today. Bari did well to take their chance, and defended like mad men in the second despite being up a man, and withstanding a near twenty minute onslaught. If that wasn’t enough it took an Abbiati gem very late to preserve the tie and both keepers were sharp on this day.

The real story was the nearly 170 minutes of AC Milan football without a goal. A team boasting a trident attack of Pato, Robinho, and Zlatan with Cassano on the bench can’t scores goals, and it just reinforces the idea that I have held all along! You can spend a fortune on your attack, but sometimes things just don’t go your way and the ball doesn’t find the back of the net. Best to make sure you won’t concede and let the goals take care of themselves, because even on a day with shot after shot and immense pressure on the Bari net things just wouldn’t go Milan’s way. Two disallowed goals, a few rough challenges in the box, and a handful of dodgy offside calls all factored into a frustrating day on the pitch. Have to wonder what guys like Van Basten and Massaro, two superior clinical strikers, were thinking up in the stands!? Can this team just catch a break now and again!??! 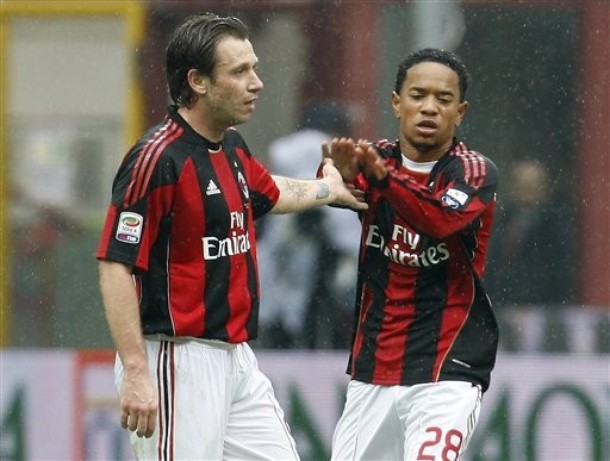 I was hoping that Allegri would have chosen to start with Cassano from the outset, but instead he opted for the same three men who went scoreless in London. A puzzling call, and to see what a difference Cassano made warrants this questioning. Pato continues to show his inability to take hold of matches, and the only real guy with some consistency, Robinho, was the one chosen to make way, granted his consistency comes in work rate and his generally consistent inability to finish! I know this is hind sight but if Allegri had opted for Zlatan instead of Robinho then red card may have been a non-issue. It was safe to say Zlatan was having a howler, and with nothing going his way it is best he was given a seat on the bench, he got his wish. 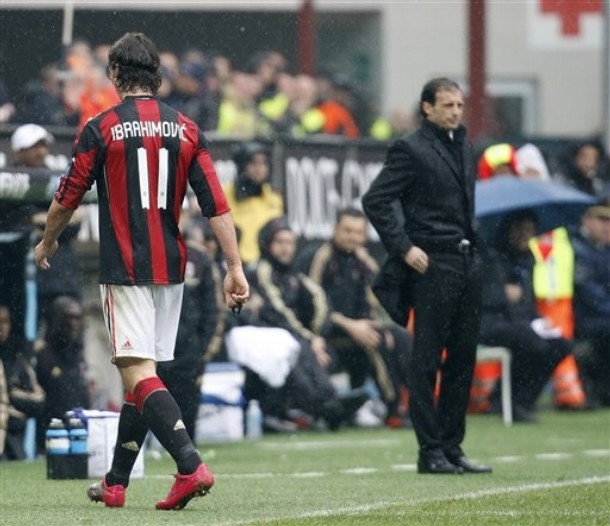 The rest of the team, save from a concentration lapse from a usually steady Van Bommel, was very good. Emanuelson impressed in his fort-five minutes, Silva was stellar, Abate was lights-out, and even Antonini was getting into the act with an assist to Cassano. His back heel in the box instead of shooting on his right was a terrible mistake, but having him find some confidence and working the flank with Urby was actually fun to watch. Just too bad that for a second straight match the rest of the team has done what is asked of them in keeping the match close and possession in the team’s favor, but the attack can’t help carry the load. It is funny in spells like this Milan always found a way to get scrappy goals, like Rino scoring against Juventus, and usually those goals came from Ambro, but without him no one seems to have that finishing touch. 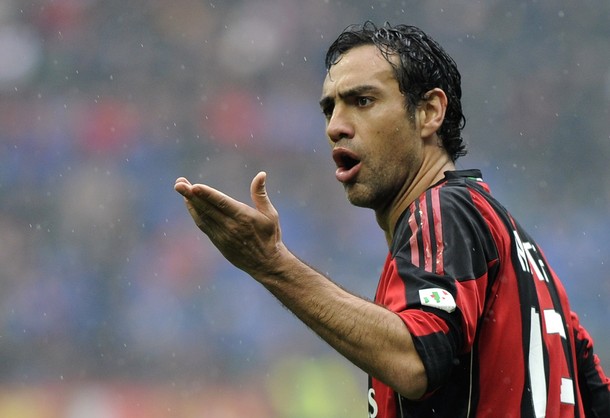 Two things to ponder before the next post:
-Three straight matches; no goals from the attacking trident: Pato, Robinho, and Zlatan…
-Did we play a more dynamic attacking game without Zlatan?

Seems like we can't take the easy road this season, nothing wrong with a little hard work, just have to keep it going.