Share All sharing options for: Tottenham 0 Milan 0: Tottenham Through...

I can’t remember a post in recent memory that has plagued me as much as this one, scattered thoughts, mixed feelings, and inability to carry a coherent theme is the reasoning behind the meandering mess below…please forgive me, but at this point best to run with this then posting nothing at all.

-Funny last night immediately following the match I turned off the TV, shutdown the laptop, peeled off my Milan jersey and left to Coach a training session. Didn’t think about Milan, didn’t check the blog via IPhone or computer, and had a pretty much Milan free night. Funny thing is, no matter how tough the loss, or how gloomy the result, it is tougher to make a conscious effort to stay away then to just give in.

-So many people were cursing the fact that Clarence had been given a start, and the Captain’s armband to boot. While he has let us down in some matches this season, this was not one of them. His play in the center of the park was bested only by Sandro, and he was never a liability or weak link. He moved slow into space at times, and delayed runs that could have used tempo but it was never an issue. Somehow he found a way to summon all his years of strength and experience in the CL but it just wasn’t enough, and when the reality sunk in that it may very well be his last CL game, the emotions got the better of him.

-Abate and Silva were absolutely stellar last night. To think on a night where Milan needed two goals, to have such a dynamic defensive performance was simply a shame. Silva cutting off passes in almost cerebral fashion, and Abate recovering to defend was excellent. Abate’s runs forwards were also dangerous in exploiting space behind Pienaar and Assou-Ekoto, and his crosses were of the non-Oddo variety, but there was a never a run into the box to capitalize. It sure is nice to see a bit of the future in the present now and again and these guys are it. 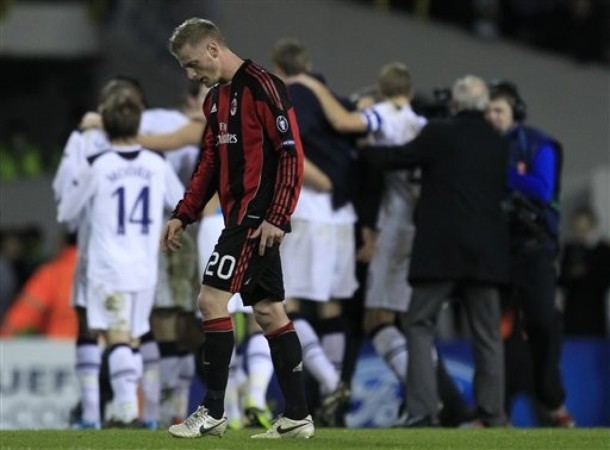 -Back to the two goal idea for a moment, on this day Milan needed two goals, two away goals even, and while this would have been the quintessential first leg performance, it was not enough in this second leg. Milan was by no means outplayed or outclassed, but as I mentioned in the comments a day or so ago, they were like a boxer who had their opponent dazed and never finished the job, never threw that hook to knock them out. As the game wore on and the minutes ticked away the match always went in favor of Tottenham, and they certainly deserved the draw, but the goals were needed early and often and they just wouldn’t come.

-I have to admit I chuckled at the comments regarding Zlatan and the fickle nature of many Milan fans. Hard to believe how a player can be a savior and deity in one breath and a villain in the next. It is not like Barcelona misrepresented him as a CL juggernaut and many of us knew what we were going to get. You can’t deny that Zlatan will help you win a league title; over the course of a long grueling season he will dazzle, pick his matches and be successful. On the flip side, when the lights are bright and he needs to be a force he has failed time and time again, he won’t be the first player with this stigma or the last, I just think at this point it is part of the package. He may deliver us a title at the end of the season and this will soon be forgotten, but all worth a laugh just the same. 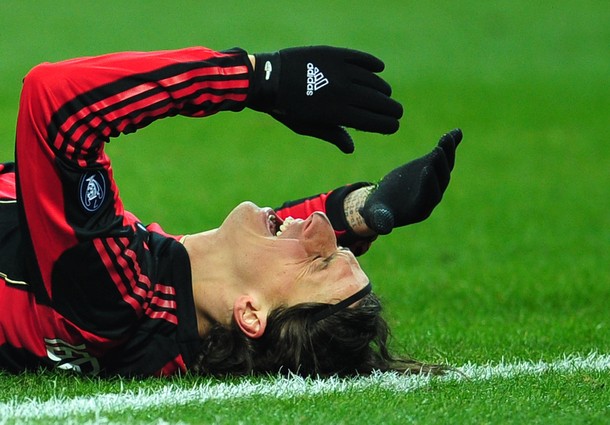 -The lack of impact subs hurt Allegri and Milan; when Redknapp can reshift and bring in guys like Jenas and Bale and Milan has to turn to youngsters there is clearly an issue. The CL cup ties and suspension didn’t help this, but there is a silver lining, Milan will be in decent shape next season come CL time, so be afraid. Both Merkel and Strasser did well, but their appearance was never going to shatter the Earth, the big onus was on Pato, Robinho, and Zlatan on this night and while Zlatan took the flack Pato and Robinho were just as inconsistent.

-Milan may not have won last night, but considering the grief Italian soccer has been getting in Europe they at least put in a performance worth hanging your hat on. Good tempo, lots of hard work, and gritty but just lacking that finishing touch. Hard to be upset, but it hurts just the same, as I said in my quick post yesterday time to zero in on the domestic double!