Another epically frustrating performance, I can live with the dropped points, because frankly all this team deserved on this day was the one. But to starting from the player selection all the way down the to the player execution it was simply an effort in frustration. We can continue to blame injuries, lack of chemistry/cohesion, and no real fluidity in play, but at what point do you turn the magnifying glass on the players, shake your head, and simply ask WTF… 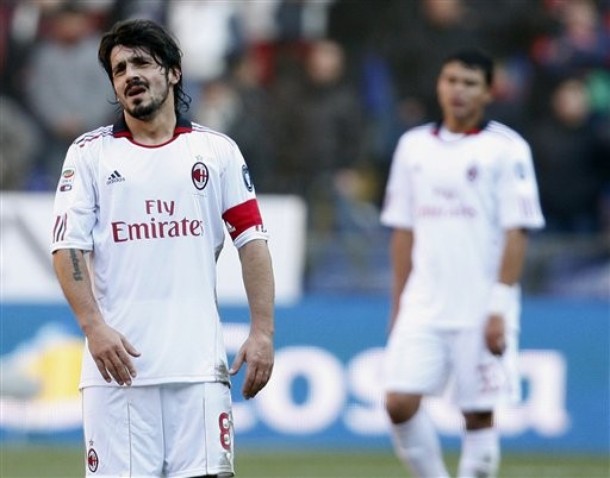 The biggest gripe against the match against was the bypassing of the midfield in the attacking build-up, today was far worse, and not because of the midfielders chosen for the match, which I will discuss, but any real lack of patience or precision in the passing. Stop for a moment and consider the player’s on the pitch, there is absolutely no reason why knocking the ball around in small areas and getting forward should not be expected or demanded by Allegri. As for Allegri, his squad choice made sense, neutralize Genoa’s midfield presence by utilizing ball-hawk workers to win the ball, the problem was not winning the ball, it was releasing it. Far too often Flamini, Rino, and Van Bommel would win the ball and the attacking trident was nowhere to be found!! Far to much space yet again between the midfield and attack and the passes consistently went backwards which then led to a long ball’s into our strikers, with only one of them being tall enough to win it! If I wanted to watch EPL style football, I would simply watch the EPL. At the 65th minute mark or so, a change was needed, and Allegri made smart choices, but only personnel wise, not tactically.

It didn’t help that Flamini was atrocious, his runs forward were mistimed and his passing was non-existent. The problem was Emanuelson didn’t offer anything better, and the better choice may have been Merkel who has provided a poise passing game that is desperately lacking since the injuries to Pirlo and now Ambro. If Milan can’t build from the midfield, they simply can’t win and this can’t be clearer than the past two matches. Again, you can blame injuries, but these players needed to have a sense of pride and ownership for their awful performances. Oddo and Bonera gave absolutely no attacking presence to create width and exploit the Genoa defense. Zlatan and Pato received little service, but even when they did they never dribbled at defenders and challenged them, which is almost a necessity when you are winning the numbers game in the back. At this point I can’t even described the level of frustration from such a poorly organized, slack team, and match.

Since the Roma loss Milan have won three and drawn four, undefeated yes, but eight points dropped is not the mark of a Champion. Yes we are knee deep in a injury crisis, but with different player selections and just some simple passing this team could be successful, but until then they deserve these draws and are only making it harder on themselves to achieve the ultimate goal of a Scudetto. Soon Abate, Pirlo, and KPB will return healthy and Milan will improve, but being top of the table at that point or chasing the top will make a World of difference, and it is all up to the players to make that happen or not.