Share All sharing options for: Milan 0 Lazio 0: One of Those Days...

On a different day this match is 2-0, or maybe even 3-0. Defensively Milan was strong, in the attack Milan was dangerous, and despite Reja’s claims that Lazio would attack, this was simply not the case. Lazio showed up to defend, that much was clear, and they did it well, organized and always behind the ball, but even with such a back footed mentality Milan made smart moves, runs, and passes but once again the end product simply wasn’t there. You can have the World’s best attack but sometimes it simply isn’t your day to find the back of the net, some call it snake-bitten, some call it unlucky, but I know it is part of the game. 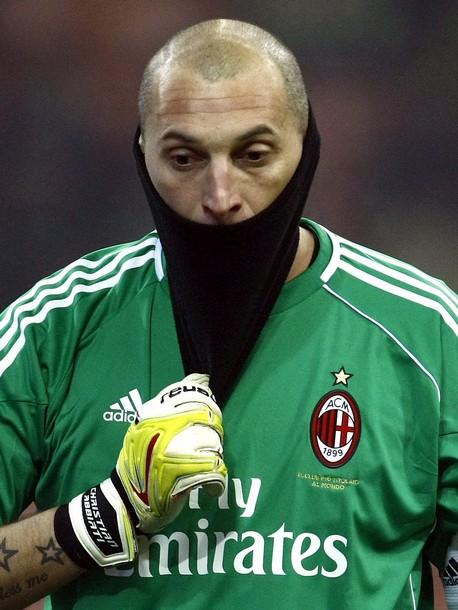 A glaring problem today for the Rossoneri was the midfield, and not in a tremendously negative way, but simply not doing enough to link the defense to the attack. They did very well winning possession, owning the middle of the field and even breaking runs into the box from Urby and Flamini. But when it came to doing the simple fundamental task of collecting the ball from the defenders they were nowhere to be found. Regardless of the team, when you lose this link, the team shape, specifically the compactness that makes possession so dominant and dangerous, is lost. Milan is a possession team and with Silva in the CM role this is difficult. Now please don’t take this as knock on Silva, he is a tremendous CB, but this only reinforces that point, and that he is doing what is best for the team at the moment even if it means a bit of a void in passing in the middle of the pitch. This problem will resolve itself with Ambro, Pirlo, and Van Bommel getting back into action, but certainly an issue that didn’t help Milan on this day.

With the midfield being bypassed in the buildup, the attacking phases of Milan looked very British. Lump it forward from the back, knock it down to an onrushing Urby or Flamini, and hope to link up in and around the box. This style of play renders guys like Pato and Robinho useless! They lacked the physicality to A. win the ball and B. fight for possession. It is also becoming painfully clear that Pato and Zlatan lack any sort of real understanding and I have to imagine Allegri is wondering how he can get Pato and Robinho together up top with Cassano or Merkel behind. This would give Zlatan a well deserved rest as he looked lethargic, but still had two of our best chances, with only thing saving Muslera was BOTH UPRIGHTS! When it boils down it, it was once again a matter of finishing. Urby, Robinho, Flamini, and Zlatan were all guilty on this day, but on the next day we may see half of those shots find the net… 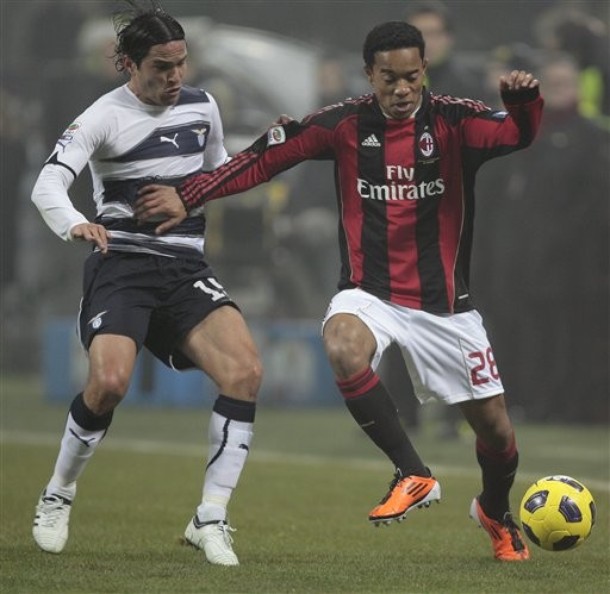 Unfortunate to see Legro’s debut spoiled by Kozak the Destroyer who looked like he had six elbows and four knees with all the flailing about, no one would have argued had he seen Red! He injured both CB’s requiring Allegri to use two of three subs for one position; only at Milan do you see this type of poor luck. Allegri’s one non CB sub was Cassano who provided an immediate impact as Milan had upped the tempo in the second half and he starting finding quality passes and interchanging well with Robinho, but even had a great chance blocked and fumbled a few passes.

An entertaining match tactically as both teams employed the same 4-3-1-2, so Milan’s individual quality over Lazio was able to shine through but it wasn’t enough to earn the result against the team sitting in third place. Now we sit patiently and wait for Napoli to drop points, but then again, had we taken care of business this would be a non-issue. Four fixtures from this one Napoli will visit the San Siro and dropping points before that already crucial match will be suicide to the Scudetto hopes. To be honest, I am not worried; this is a bump in the road. We were the better team despite injuries and a makeshift lineups, just have to make sure when things get back to normal we are holding the title and not chasing it!