Back to Where We Belong...

Share All sharing options for: Back to Where We Belong...

A full strength Tottenham squad is really a thing of beauty. Ol’Arry (Cockney accent required) Redknapp has assembled quite the squad for himself. Plenty of attack options, a decent defense, and an exciting brand of football. So exciting in fact they came to the San Siro on a Blue and Black day and put three on the defending CL Champions!? Not too shabby, sure Rafa Benitez was in charge, and one Inter fan, who will remain nameless, even alluded to the hilarious old adage that even a blind squirrel finds a nut every once and awhile, but if that match proved anything Tottenham Hotspur is not to be taken lightly.

Milan have struck a bit of good fortune, the only team with an injury list as depressing as ours is Totts (which I affectionately refer to them as, over the London rival’s use of the nickname Spuds). Rafeal Van Der Vaart, Luka Modric, and the electric Gareth Bale are all struggling to gain match fitness so Milan has to do everything in their power to gain a result here. Even Luca Modric understands this and believes the team that comes out on top at the San Siro will be through to the next round. Maybe Luka is right, but I didn’t take his comment to lightly. There was a time, not too long ago, that teams would enter the hallowed grounds of the San Siro hoping merely for a draw, this was Milan’s turf and in the CL it was sacred ground where no team had come in and earned a victory, until of course another Club from London tarnished that dynasty. Alas, all good things come to an end, but all streaks have to start somewhere and Allegri may just have it in him to make this happen. 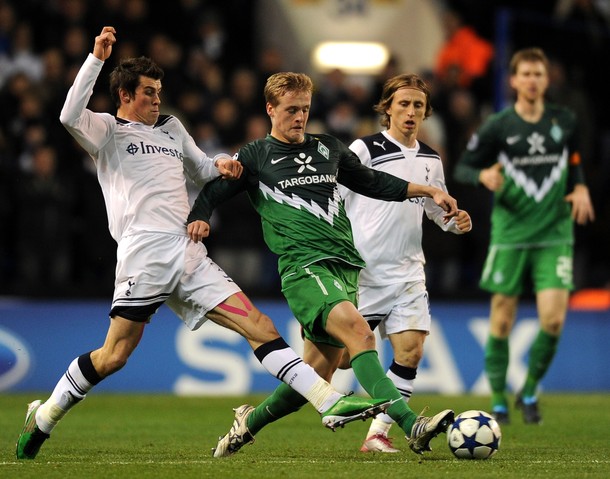 The football fan in me wishes Totts were at full strength, but then again I want to see Milan at full strength as well. Gareth Bale flying at Abate, Lennon keeping pace with Antonini, and Rino reminding VdV why he once made Cristiano Ronaldo cry. That is what CL football is all about, but we may not get to see those awesome match-ups, but this match will be exciting nonetheless, and even though Ol’Arry is a bit of a dud when it comes to tactics, he has the talent and firepower in his team to put on a show. Allegri has the upper hand here and it is time he shows it.

I wanted to talk about potential line-ups, but with both teams so depleted it is hard to decide who will be fit and who won’t and it won’t do the match justice for me to fumble around and project lineups when even the managers don’t know who will be available. Instead I want to take a minute and let some of you in on the worst kept secret at the AC Milan Offside, I LOVE GARETH BALE.

I know, I know, a funny looking big eared winger, what am I thinking!? I will tell you what I am thinking, but more importantly I will tell you why! The first time I ever laid eyes on Paolo Maldini playing this game, it made my heart stop, I stood up and took notice of not only the player, but the game, the way he played it and the way he moved, it was incredible. From that moment on I was a fan of Maldini, Milan, and football as a whole. I never felt that again until I saw Gareth Bale fly down the wing, beat his man on the inside, then as if it was a children’s game, he turned him outside again so he could line up a left footed shot that he slotted into to the top right corner. At that moment I had the same exact same feeling all over again, almost twenty years later. The size, the speed, the agility, the precision, and the class there has not yet been a player that has what Maldini had and he is the closest I have ever seen. For that alone I am in awe. Do I want him at Milan? Of course I do! Do I watch him play whenever I can, always! So the fan in me hopes he is fit, the Milan fan in me wants him as far up in the stands as humanely possible, or just thrashing Inter every week! So now you know…

OK enough of that, bottom line, this is going to be good. Milan is at home and would do well to get on Tottenham early, their defense is their weak point, but more importantly they are young and frustrated easily. A good strong spell of possession should have them chasing and playing to Milan’s strength, take away their pace and there won’t be much left to contend with, except of course a freakish giant named Peter Crouch who has scored six goals in the group stages, but again I digress. This is a game where experience can simply outwit and outplay, and Milan has that in droves, time to play that way.

Welcome back to the big show AC Milan, let’s remind Europe why no other team has been as dominant in the CL in the last twenty years as our very own AC MILAN!!!!!!!!!!!!

On a side note a member of our AC Milan Offside family, Faisal, has written a top-class piece for latewinner.com discussing the Pato/Zlatan dilemma, check it out! He also has a great midseason prediction piece that is not to late to take a peak at.

So as if a facebook page and a twitter feed were not enough the AC Milan Offside is now in Spanish as well! Check out Samir's blog if you would like his take on Milan ¡En español!