The Death of the Fullback

Share All sharing options for: The Death of the Fullback

This piece was meant to run as a Tactics Thursday yesterday, but the thought of extorting 50M from PSG and doing a little post-XMAS shopping was simply too good to pass up. Now this isn’t meant to be a eulogy for my favorite position by any means, but a discussion on what has happened to the fullback?

Being a Milan fan we are no stranger to the fullback position, being the home of arguably two of the World’s best in Paolo Maldini and Cafu, not to mention a host of other talented options in Costacurta, Serginho, Panucci , Janks, and others. But in the past few years outside of the emergence of Ignazio Abate at RB, Milan, Serie A, and much of the World has seen a decline in the fullback as we knew it. Gone is the marauding fullback capable of joining the attack as well as defending better than anyone else on the team, able to track down wingers and negate opposing crosses. I am not talking Maldini-esque challenges, but simply the ability to be tactically sound and handle both sides of the ball equally well. 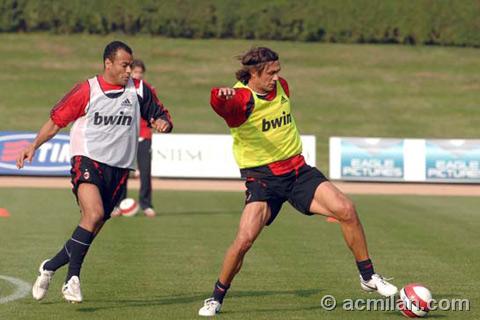 Now players with the athleticism of their fullbacking forefathers are moved into wing positions in the midfield, attacking more and defending less, or into wing-back positions for coaches who choose to deploy only three at the back. In fact few players are turned into fullbacks as was done successfully with Serginho and now Abate at AC Milan. Players like Dani Alves and Gareth Bale have the athleticism and raw talent to be some of the best fullbacks in the game but instead their inability to learn the nuances of defense has turned them into attack minded wingers as opposed to all around talents at fullbacks. Why aren’t coaches nurturing this position anymore, has the game changed to make the wide attack irrelevant? Pressing and possession is now the name of the game, and a lot of teams are using more narrow formations with skilled players in the middle of the field and less reliance on outside attacks. Sure some teams still play very wide, but often times with wingbacks and wingers instead of the old fashioned way with fullbacks.

Italy, often known for producing quality defenders seems to be having the same problem. Maggio and Dossena of Napoli are now wing-backs; same can be said for Armero at Udinese. Promising young defenders like Santon and Motta are afterthoughts, with Motta being the biggest pile of unrealized hype I have seen in a while, no coincidence it was Roma fans doing the hyping, but you get my point. At Juventus Conte has deployed Chiellini, a prototypical CB at LB, even Arsene Wenger has deployed four CBs at the back due to injuries. Pep Guardiola has seemingly done the same, but instead of removing fullbacks he seems to be stepping away from the defender completely hoping to deploy more midfield type players. Is it tactics, is it lack of talent, or is it simply the extinction of the fullback like the sweeper before him?

Tough to tell really and I am not going to go ahead and say that the fullback is in fact going extinct, but the idea of seeing the next Paolo Maldini seems farther and farther away from ever happening. There are still supremely talented players and youngsters at the positions, as well as tried and true throwbacks. Leighton Baines, for one, always makes me smile as does Patrice Evra and Balzaretti. But players like Bertrand, the vice Ashley Cole at Chelsea, or Van Der Weil or even Abate can help bring the role back into prominence but we may never see the completeness of the Legends before them.