For the time being Milan sits atop the Serie A table as the team and fans anxiously await this weekend’s results. Shortly we will be treated to Udine and Inter, and while no one should root for our rival, Udinese sits three points adrift of the top. Juventus on the other hand can reclaim first place with a victory and it appears the title race is starting to get interesting as the we approach the Christmas break. Can Milan take hold and never look back, or will we be treated to a see-saw finish? Can’t answer that for you quite yet, and first place would have been a lost cause had business not been taken care of in Genoa.

Beating Genoa at home is no small task, for Milan the impressive unbeaten run continues. It was not the best of games, or the most exciting, but it is the type of win that is a building block of Champions. It is in these matches where three points do not come easily, but are the most important over the course of a long season. A disjointed game from start to finish, even the fans had their say early on with an incident of tear gas/pepper spray that stopped the match for fifteen minutes in the first half, but more importantly rendered it a sloppy affair. 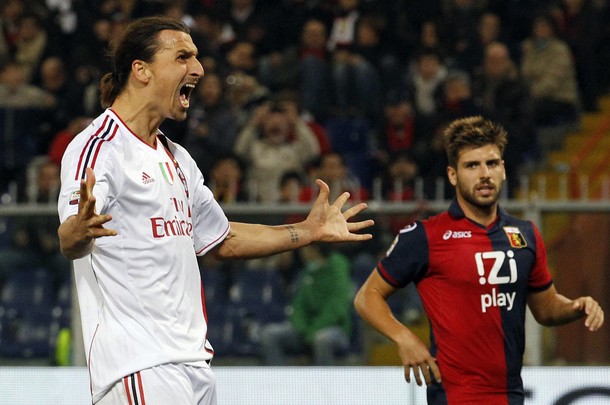 Milan had other ideas in the second half , and while they enjoyed the bulk of possession and control of the match they began to attack in a bit more fluid fashion as Ibra continued his stellar playmaking role, looking less and less like an out and striker and more and more like a superb support striker. I have always contented that Arsenal’s Robin Van Persie is one of the game’s best strikers at creating and doing the little things, but suddenly it is Zlatan who is showing RvP a thing or two! As chances came and went it was ex Milan player Kaladze who gave Milan the break they needed with a poor challenge on Ibra and a subsequent PK. 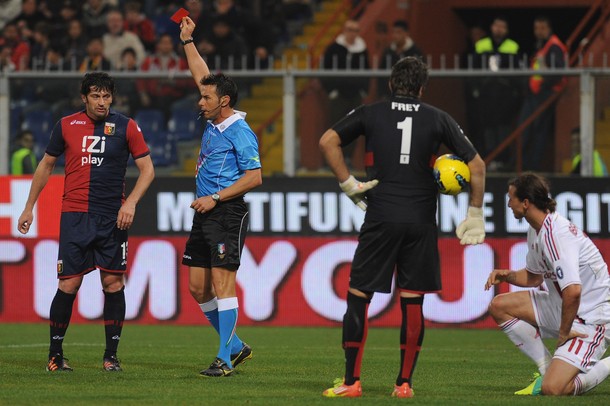 After the goal Milan dominated long spells sending 8 players into the attacking third and possessing the ball easily. A span of about ten minutes late in the second half was all Genoa had to show as Milan finished the scoring with Nocerino, after an excellent run and cross from Prince. Seeing those two operate in the midfield position alongside Ambro was simply excellent, and you have to wonder if Allegri had made that choice against Barca if the game would have gone differently. Both players have the ability to get forward and create will maintaining the work rate to defend, a potential World Class tandem of box to box midfielders. 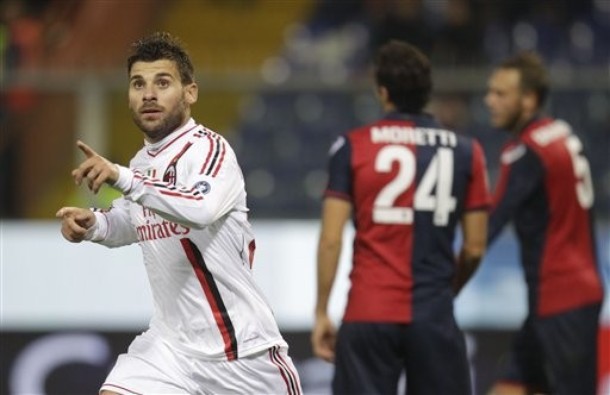 There were few other standout performances in the match, with Robinho being chastised for his missed opportunity, nothing new, but hey at least he was healthy to partake in the match! Antonini actually did well, but continues to be exposed rather easily on the defensive side of the ball. Allegri chose Yepes over Mexes, to fill in for Nesta and even that is starting to get a bit troublesome. If Mexes is fit to play it may be time to see some minutes because the pace of Yepes is alarming, even though his strength and power is second to none. On a more positive note, the team, and Marco Amelia got their second straight clean sheet, ah I don’t miss the dynamic duo of Dida and Kalac, that is for sure.

At the end of the day, it was not the prettiest or cleanest of matches but the result still stands. A two goal win away from home and three points in the bag and a spot at the top, even if for a fleeting a minute. Midweek a trip to PLZEN, a rather meaningless affair, but as the schedule rounds out towards the new year, games will start to come twice a week on the regular, Allegri and company need to build on and find confidence in performances like this one where even if the team was not playing to its fullest they still found a way to win. The goals for those who missed out.