Let's Hear it for Max

Share All sharing options for: Let's Hear it for Max

It is no secret; I really respect and admire Max Allegri. Frankly it is hard not to, he isn't on TV turning Milan into sideshow, he puts results first, and he approaches each game with the pragmatic sense of what is needed to earn a victory. He isn’t enamored with this notion that football is a spectacle; he knows deep down inside that winning cures all and for that Max I think you. So when his Boss came out and said he wished Milan played more like Barcelona, what did Max do? Like a true gentleman, he told his Boss to shove it! Well played Max, well played!

AC Milan coach Massimiliano Allegri has voiced his opinion that it is impossible to copy Barcelona's style of play in the wake of recent comments from club president Silvio Berlusconi, who declared that he would like to see the Rossoneri play like the Catalans.
Allegri feels that the newly-crowned 2011 Club World Cup champions are unique, but added that Milan have plenty of quality as well and can compete in their own way.

"It is impossible to copy Barcelona. We have a squad with lots of great players and real champions. We are top class in Italy and I believe that we can do well in the Champions League too, with different characteristics to Barcelona," Allegri said to Domenica Sportiva.

"The things that they are doing are unique and can't be copied. Arrigo Sacchi's Milan have players and characteristics that others didn't have. Every coach has to play in a way that gets the best out of the player at his availability."

Allegri then praised Sacchi for introducing young players into the senior side, and believes his current outfit are on the right path to doing the same.

"Sacchi's Milan were a very strong team, but did not only consist of big names, but also had plenty of youth products. We are doing some great work in our youth academy. We are incorporating more and more young players into the first team."

Youngsters such as Simone Ganz, Bryan Cristante and Mattia De Sciglio have all made their debuts with the senior side this term.

So what can we ascertain from Max’s discussion? First and foremost the one thing that seems to be forgotten by every team trying to emulate Barca, and the most obvious, mind you, is that you need the players. Barca plays BarcaBall because they can with the likes of Xavi, Messi and Iniesta. Other teams just don't see this! Neither do owners, in Berlu’s sick twisted fantasy, Milan would play 4-3-3 with Pato, Robinho, and Zlatan up front, knowing Berlu he would probably even stick Pato central and Zlatan wide!? He hasn't even considered the value of defense!? What Berlu also doesn’t seem to recognize is that when you play 4-3-3 you are telling the opponent who will be scoring goals, and where to counter attack? RW, presses toward goal, LB can kick start the counter, midfielders up in support of the attackers, play a long ball in front of the defense. The 4-3-3 is inherently flawed for any team who don't have the personnel to play it. Instead Milan now plays with width on the right in Abate, and have goal scoring from the midfield as well with both Prince and Nocerino very capable. It makes Milan more dynamic and not dependent on a single goal scorer. 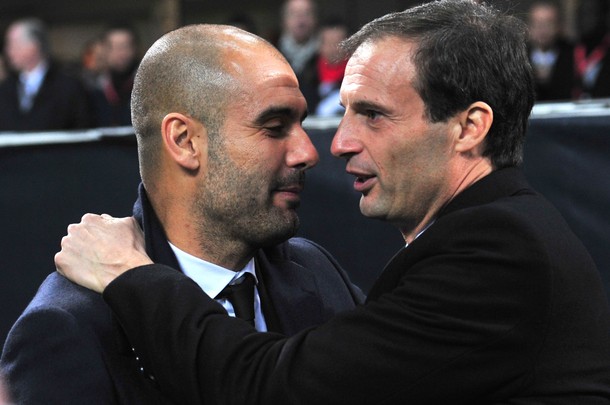 Allegri also sees the value of forging your own identity and by doing so getting the most out of the players at his disposal. In these modern times of Football Manager and FIFA it is easy for a fan to pretend they are Man City and buy whomever they like for their squad, irregardless of money. It is also easy to plug in random youth into the team, see some success and wonder why isn't Milan doing that? Answer is simply because algorithms don’t factor in traits like experience and one of the most important ones, being a human! Kidding aside, Allegri knows how to deploy aging players like Van Bommel, Ambro, Zambro, and Seedorf in situations to make both the player and team successful. A comment a few days criticized Ambro for not moving much, this same commenter probably never really looked closely at Van Bommel who rarely moves out of the center circle, this is by design. Shield the defense and be the first passing option forward for the CBs. In fact to his credit Ambro gets more forward than Van Bommel ever does, sometimes to much even!

So while the World chases the elusive Barca copycat mantra, Allegri basically says screw it, I will do my own thing! So if Milan can find a way to topple the mighty Barca, maybe next year everyone will be copying our very own Milan, then again best we let Milan be Milan, let the others figure things out for themselves. Not to mention he may be a bit of a physic stating that Milan would be top of the table come XMAS, any other talents we don't know about Max?