This morning Milan sits alone atop Serie A, and while it is pending the result of our little Bianconeri problem, the real credit is in the result obtained yesterday. If Milan finds a way to win this year’s Scudetto it is a match like this one, when we took first place in gritty fashion, that you can say was pivotal in the charge. As we learned firsthand last season winning a title is not always walking pace 3-0 wins, sometimes it takes a bit of grit and getting your hands dirty to grind out a result, and in the pouring rain on Sardinia, mission accomplished.

Last season in this fixture Milan waited for Rodney Strasser to score his first goal from the first of many assists from Antonio Cassano, this year was a bit different, with Milan scoring early on an own goal but a makeshift defense, Cagliari’s willingness to attack, and Milan’s lack of possession made for an interesting 90 minutes. Unlike Siena, Cagliari had no fear coming forward, they saw Milan’s defense and felt their best option was to attack. Cagliari succeeded with Cossu, Nianggolan, and Ibarbo linking as effectively as their Milan counterparts, in fact rewatching bits of the game you almost feel like Cagliari has three players named Nianggolan running around the pitch. Credit to Abbiati for coming up big with sure and steady hands whenever he was called upon, for what some call an “average” goalkeeper his MOTM performance surely was a reason Milan earned three points. 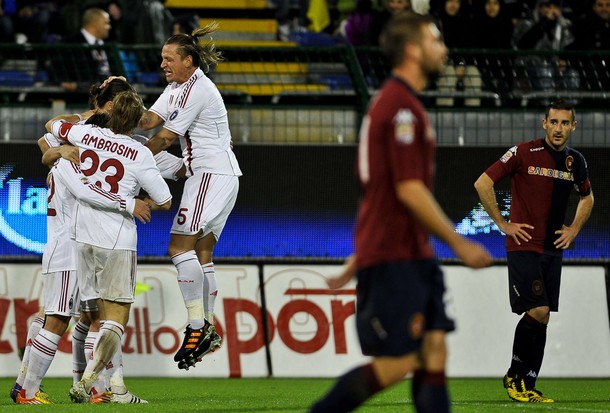 The makeshift defense was mostly at fault for Cagliari’s willingness to attack, and not so much in defending, but their lack of composure on the ball. Often when they did win the ball, instead of passing to the checking midfielders, or even Zlatan who was even deeper than usual to provide more passing options in the space left by Cagliari, Milan’s defense simply hoofed the ball forward. Mexes and Taiwo were most guilty, and maybe a byproduct of their lack of first team action and chemistry, but this will need to improve if they plan on seeing more playing time. Taiwo also struggled to join the attack, which was made to appear even worse with Bonera getting forward like Abate, granted the former looks like a FIAT Panda while the latter is like a Ferrari, but either way we are getting forward from the back. Because passes were not coming in the usual quick and short combinations both Prince and Aquilani struggled to get involved and had matches to forget. Nocerino continues to be everywhere and at this point own goal or not, he has to be considered one of our most dangerous goal scorers with his runs into the box. That will pose a real problem for any team needing to worry about Zlatan, Robinho and now a midfielder who comes out of nowhere to bury the ball in the back of the net. Hope you are watching Prandelli! Robinho was responsible for two assists and once Pato came on he did little but to his credit the match was in the dying stages and Pato was unable to use his electric pace, amazing skill, and incredible talent to find the back of the net against an exhausted back line but hey maybe he will score in the New Year!? 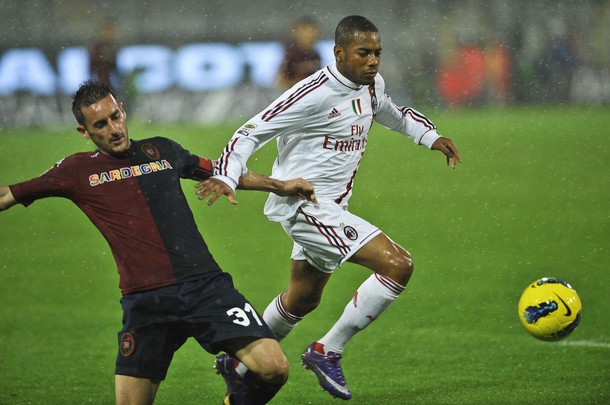 All and all a great performance on the heels of a difficult game on Saturday as well, it is never easy to play two games so close together, but 6 points out of a possible 6, 31 out of the last 33 and top of the table! While we may not be Winter Champions, I like the momentum and position in which we sit at the start of the New Year. Now onto the silly season, thankfully it is a short one, with Fester in Man City today we should know more about the Apache Carlos Tevez, in the meantime your thoughts on the match are always welcome.