So I can sit here and rehash the same post from Palermo or Bate. Stating how well Milan held the ball, limited opponents chances, and worked the ball into the final third. Safe to say at this point, I think we get it, and the Milan from the beginning of the season is starting to really disappear. The emerging Milan, while not as defensively sound, has found a way to score goals in bunches, so let's discuss further in some random ramblings.

-Eight goals in the last two games, and out of those eight we have 6 from midfielders, 1 from a defender and 1 from a striker. Sure enough a few posts back I read a comment that went something along the lines of, why is a defender scoring shouldn't strikers score? Last year we got 42 goals from strikers, and what did people say? Why can't midfielders score, this year midfielders are scoring and sure enough people want strikers to score. Moral of the story, people always have something to say, truth of the matter is I don't care where the goals come from. Strikers may not score but they are pressuring the ball, creating space, and making passes...they will get their goals. 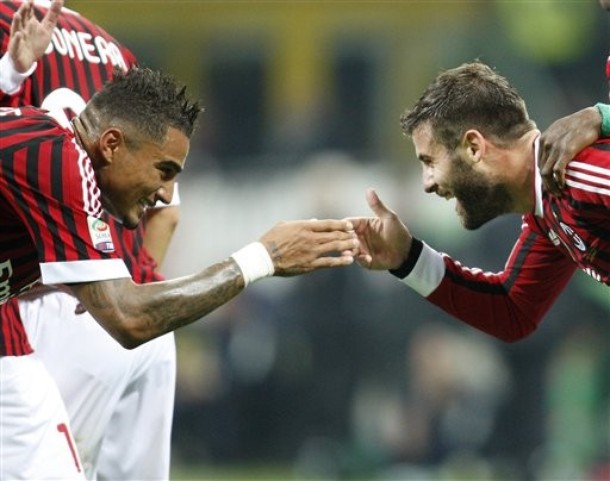 -Ambrosini looked to regain some form and fitness yesterday. His role is vital, rotating him with Van Bommel is crucial in protecting the defense, keep both players fit and fresh, and providing leadership in the midfield. 1 out of the 2 must be present at all times. Now that Prince and Aquilani are asserting themselves as well, it looks like Seedorf will finally get the long over due role reduction.

-Taiwo made some real progress yesterday in taking the steps needed to be the LB for this team. Some people are perpetually impatient, they want to know why he isn't playing NOW, throwing temper tantrums about it. But like all things in life, playing time, is not something a player is entitled too, it is earned. Even Taiwo last week admitted his defensive skills needed work and he is putting in extra hours watching game footage, hard work is paying off. So when he does finally take the reins at LB he will truly be ready, not just fumbling around because someone thinks he should play. 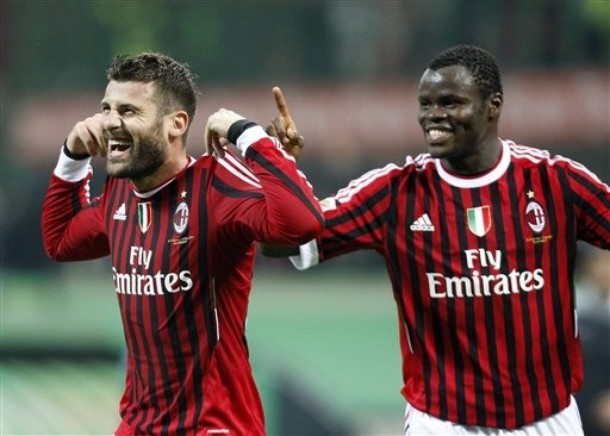 -Nocerino, Nocerino, Nocerino. Three goals, from a guy who was an afterthought. The complaints around here were hilarious, Nocerino is small time, a bench player, but all along I felt he had the talent to be great and quietly smiled upon his arrival. A few days later I even ordered my Nocerino jersey, why not, a player I have liked since his days at Juventus, a player I felt had the potential to rival the likes of Essien, now I can wear my jersey and smile. Well done Fester, I never doubted this move for a second.

-Abbiati has had a rough season, no denying it. Last season's GK of the Serie A is in a rough patch, and like clock work the naysayers are out claiming he is an average goalkeeper and should be replaced. I simply don't agree, he is a leader, and like an outfield is in a run of bad form. Bad form is always magnified in keepers and what I notice is despite the occasional Dida-esque howler, he is still making class saves in matches. Thankfully the howlers aren't all going in, when that starts happening then we can talk Amelia. Until then, have some faith in a guy who did a lot for us last season.

I want to end with two more odds and ends, back tomorrow with a little Roma preview:

-Milan are league leaders in goals scored and goals conceded. While the most recent Milan has shown it can score we are struggling in set pieces, still, and pressuring the ball after the first application of pressure. It didn't help that Van Bommel looked like a walking zombie and Robinho was on the mend, but the end of the day this dubious record needs to change. Champions don't rely on 4-3 victories, and if this continues a repeat will be out of the question.

-Allegri is going to wait until the end of the season to extend his deal. The doomsday crowd would have had him fired in September, but I think this is simply Allegri doing what he has done best all along. Keep his head down and do his job. The deal is rumored to be an extension with a 500K raise per year from 1.5M to 2M, deserved if you ask me, and when he is ready he will sign, in the meantime he probably feels nobody needs the distraction. As if that wasn't enough to win you over, right after that he said he still wasn't happy with his team despite winning 4-1! Now we are talking...I have a funny feeling Allegri doesn't like giving up goals.

-Oh yeah in case you missed Nocerino's second goal...here you go...bring a napkin so you can clean up the drool...