So what is it going to take? How many more performances does this Milan team need to muster to get one dim witted CL announcer to stand up and take notice? What is it going to take for our boy's to get some respect in this tournament? Granted, it was hard for this team to earn some respect around here from some of you, but thankfully that lot has crawled back into it's holes, they said we can't compete in the CL, we will be over run, I believe I have heard it all. But now it's time to talk about the real truth! 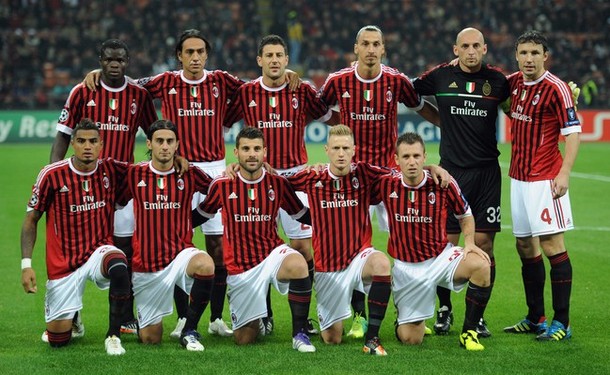 Three matches in the bag and we have seven points and sit atop Group H with Barcelona, defending Champions, of which we took a point from at the dreaded Camp Nou. But alas, Milan wont' compete in the CL, Milan are to old, to slow, and the mercato was cheap skate! We were promised big signings, boo hoo, and yet here we are. Almost assured of a ticket to the knockout rounds and a showdown at the San Siro with Barcelona for all the spoils of the Group. Excited yet? I know I am, the team took the ribbing, the verbal abuse, the lack of confidence both from fans and pundits and they stood there, tall and strong to boot, and let the football do the talking!

So let's talk about the football shall we. Yesterday was a great compliment to Saturday's romp of Palermo. The dynamic movements and interchanging of the midfield line with Prince was fantastic, and the movement of Cassano and Zlatan was just as stellar to watch. Sure you have to acknowledge that the opponent was not exactly the cream of the crop, but outside of a few nervous minutes in the second half Milan were always in control. Not to mention those few nervous minutes were exclusively from Milan blunders, with Van Bommel and Abate the guilty culprits and Abbiati to the rescue. But the rest was good simple football, counter when allowed, posses when needed, and break towards goal when the defense allowed it.

Milan played so well in fact it is almost impossible to pick a MOTM. Aquilani's simple passing and two almost goals put him high on the list, but then there was Zlatan's efforts, and Abate's forays forward. You know things are going your way when almost all the players are in contention. At the end of the day though it all boils down to being a team effort and the tactical deployment on the pitch. Yes, injured players have returned but the team has not changed significantly, what has changed is the chemistry and cohesion of the group and the signs are starting to show on the pitch. A few more points to consider:

- Is the Bonera jinx over, two matches six points?

-Taiwo appears far more comfortable in the open play of the CL than in the cagey Serie A. (This one was intriguing as I wrote in the 65th minute, still has a lot to learn about defending but can really play in a more open environment.)

-Boateng's touch on the goal to kill the ball dead and push off for shot was incredible. Some want him in the midfield three, but his ability close to goal is undeniable, where is the best place for the Prince?

So with that we celebrate another victory, two in a row, and prepare for a match with Lecce on the weekend. I leave with a simple yet nagging question: Anyone still think this team can't compete in the CL?