Share All sharing options for: Milan 3 Palermo 0: The Binho Effect

We can talk about goals, there were 3! Or we can talk about the movement and pressing, which there was plenty. Or we can simply talk about a little man who made a big difference, by doing nothing more than busting his hump and being a jack in the box in the attacking third, that man was Robinho, and all I can say is welcome back! 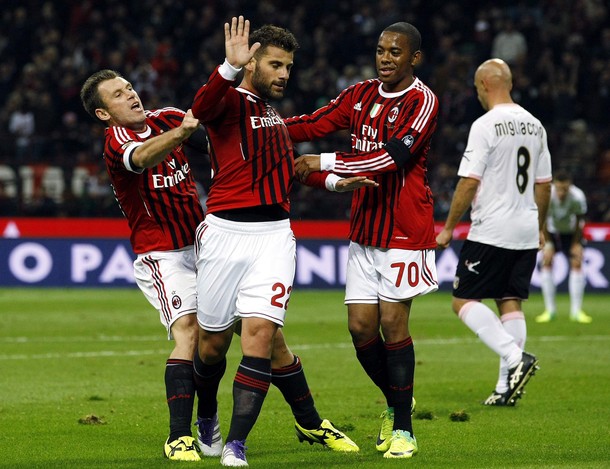 A few posts back someone posted a stat about Robinho that says a lot about the player and the team when he is the lineup. When Robinho is on the field Milan concedes less than a goal a game (the exact number is .61) for those of you who don't see the finer points of the mathematics here, it is simple. If you don't concede you can never lose, sure you may draw, but a point is better than none, and it is with that adage we can coin the Robinho Effect. Injuries had decimated this team early, to the point of oblivion for some, but I preached patience and tried to keep a level head. I knew once the team got healthy and Allegri had more options things would improve, and even with injuries and missing players, one key component has returned and the result speaks for itself.

Yes, in classic Milan fashion it took 10-15 minutes for the team to find its legs, but once it did the result was never in question. A Palermo team that often gives Milan fits, was rendered useless and inept, and in the final minutes it looked more like an exhibition than a proper football match. The movement, the work rate, the simplicity of possession, everything that made Milan the team it was last season was on display against Palermo. The attacking trident of Zlatan, Cassano, and Robinho was impressive, the passing, off the ball runs and footwork relieved tension from the midfielders. It helped that for once their was decent pace in Aquilani and Nocerino, but the simplicity of passing and the ever present body of Robinho to collect the ball, pass it quick and combine was pretty to watch. Even defensively Milan was solid, despite losing Silva early to injury and having Bonera on the pitch, a sort of icing on the cake, because for once Milan did not drop points with Bonera on the pitch!

Now this win doesn't cure all that ails, there is a still the issue of injuries, but seeing the lineup today makes Pato more of an afterthought than a key piece. Even the announcer poked fun at the Duck by saying Pato does only two things: score goals and get injured. Ambrosini will be a welcome return to help spell Van Bommel who looks sluggish due to the glut of games early on, neither will last the season but having them rotated will be a big plus. There was also some frustration on the face of Zlatan who was simply unable to find the back of the net, but this was more on him than his teammates. Allegri also has to start putting some faith in Taiwo or LB will continue to be a problem. I am not saying he play in every match, or difficult situations, but getting him on the pitch yesterday instead of Urby would have gone a long way.

Now a midweek game against BATE sitting on four points in the CL is the next challenge with Lecce on the horizon. Allegri will need to balance and rotate the squad, but before we worry about that we should enjoy the win, but more importantly the silence. The doomsday bunch will have nothing to talk about on this day!