I love La Befana, and as a little Italian kid growing up Stateside it was always an excuse to get an extra little present from my Parents or my Nonni on January 6th. But alas growing up is never easy, and seeing that this is Milan we have our own Christmas gift giver, ladies and gentleman, courtesy of Mr. and Mrs. Shankly, please meet La Ibrafana! 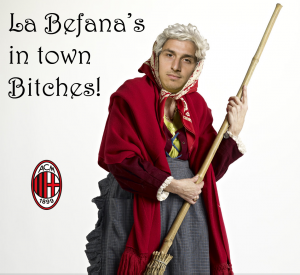 This hideously beautiful figure delivered us three points today, from the bench no less, but not without the help of our Christmas present Antonino Cassano! Cassano was given a 25 minute run by Allegri and they proved pivotal as he slotted the perfect little pass across to Strasser who buried his first chance on goal in the first team and have Milan the type of win that you build title runs. The type of win that you have no business getting, because:

A) the other team plays better
B) you simply didn't deserve it
C) you just got lucky.

All those choices suit Milan on this day, but no one will remember because the three points are already in hand on a day where Lazio drew and Juventus lost it all worked to perfection. 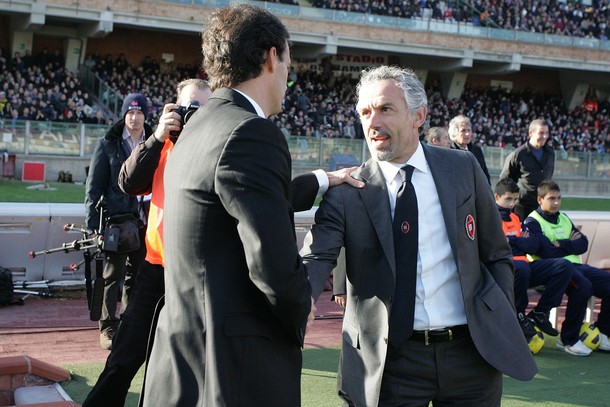 I do want to start though by given credit to the Don. With both managers having the added fun of Coaching against their old teams, Allegri as a former Coach, and Donadoni as a former player, it was the Don who came out swinging. He decided to buck conventional wisdom and attack Milan with width and pace and Milan didn't seem ready for that as they were fortunate not to concede in the first half hitting the post, and it took a good save from Abbiati on a Lazzari shot to keep the door shut. It was actually a rather impressive day for Milan target Lazzari who had to subbed due to injury, but was clearly playing to impress. Matri and Astori were also very solid with Matri often creating most of Cagliari's chances on the ball. Milan were eventually able to assert themselves in possession but lacked any real incisive movements going forward. Pato and Robinho have yet to establish a solid partnership and throwing Merkel into the mix didn't help. They lacked chemistry and cohesion with every movement forward. I personally have to question why Allegri didn't opt for Seedorf at CAM and Strasser in the three man midfield line, but Max came good on his substitutions, using them early and effectively with both Strasser and Cassano factoring in on the goal. 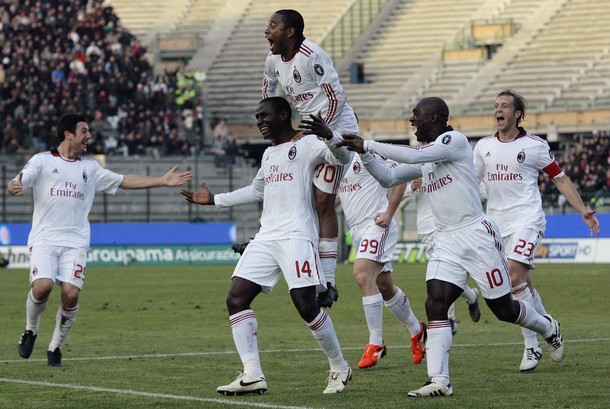 A sloppier game than usual, but if you consider the team was without a handful of starters yet still managed to create chances and earn a result it was not all that disappointing. There were a few a disappointing player performances with the first being that of Pato. My immediate thought was that he would function in the same role as Zlatan, collecting the ball deeper, facing goal, and make a quick pass or break for goal. This would work, but I forget that Pato simply can't pass, so as attacks mounted they collapsed before they even really started. Robinho was his same busy self but his touches were poor following a long break, he worked so hard to find that touch again and I hate to have to watch him do it yet again, but we may have no choice. Unless of course Allegri opts for a partnership of Cassano and Zlatan over the weekend which seems highly unlikely, because of the age old question who plays CAM?

The weekend brings a match against Udinese which has historically not been favorable to Milan. Udinese always have the threat of Toto DiNatale and their new found vein of form combined with a strong midfield combo of Asamoah and Inler, this match can prove a challenge for Milan. Fatigue will be a factor for both teams but it will be up to Allegri to maximize his squad which he did effectively on this day. Abate, Bonera, Silva, and Ants should be good to go, but Ambro should move back to the center and Strasser to the left with Seedorf taking a bench seat. Cassano may have to play CAM with Merkel in the wings if he is can't last the full 90. Zlatan will return with Pato or Robinho, with the other acting as a sub. If the youngsters can continue to contribute it will help Milan's ability to competitive and give the team depth in the midfield line that desperately needs it. 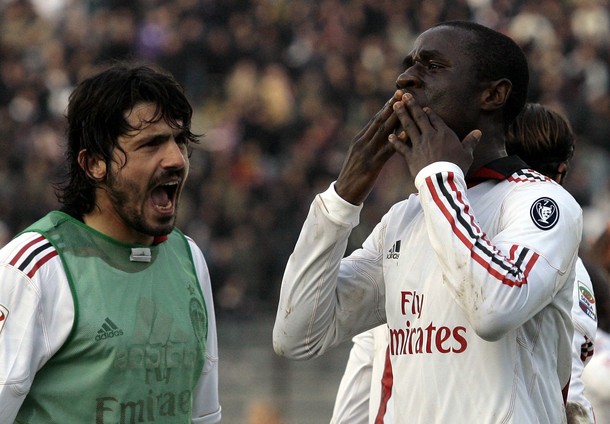 A good way to kick off the New Year and erase the dropped points from Roma, now to keep the ball rolling and build momentum to open the lead and deliver us our real present for 2011!