Four regular starters and one of them playing out of position seemed to pose no problem for Milan in the Coppa Italia as they dominated Sampdoria in the first half, and while the game got a little nervy in the second half, Milan were better team on the day. Now onto Palermo for the Coppa Italia semifinals and Milan’s quest for a treble!? Still can’t believe I am actually saying that…

Pato must have read my last post as he came up big today shutting me up with two goals, both clinically taken, but the surprise was his work off the ball as well. His passing, quite frankly, still absolutely sucks but when he can get close to his striker partner and play off them he becomes infinitely more dangerous. This is hard to believe because with his pace I feel like he should be a beast running at people with the ball at his feet like a Torres or Villa, but his finishing skills seem to make him most dangerous closer to goal, a puzzling mix of traits and skills if you ask me. 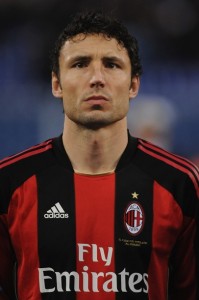 A player who was not puzzling in the least on this day was Mark; I don’t want to call him MVB because it is disrespectful to the real MVB, Marco Van Basten, Van Bommel! He fit in exceptionally well and I can’t seem to think of another player who is more consistent in his roles and duties for each and every team he has played for than this man. He even got acquainted with the refs, and he will portably get used to it because he won’t be seeing Euro refs in the CL! Emanuelson was also a refreshing, he faded as the game wore on, but was active early getting a lot of touches and providing a left foot, something I haven’t seen since Borriello skipped town! Either way was pleased with both acquisitions and the new found depth they will bring to the table.

Defensively, considering the personnel, Milan was also very strong. It helped that at times Silva looked like a 3rd CB protecting Sokratis and Yepes, but both Macheda and Maccarone looked dangerous so a good performance all around. Merkel once again was fantastic and the simplicity in which he plays and the awareness he has is incredible for such a young player. He really is going to be something and I think Allegri is starting to buy into it as well. A few chances to score today and great simple passing have possibly earned him another start on the weekend. No arguments from me, and since the Bari Coppa match he has been the most consistent and hard working player alongside Robinho. 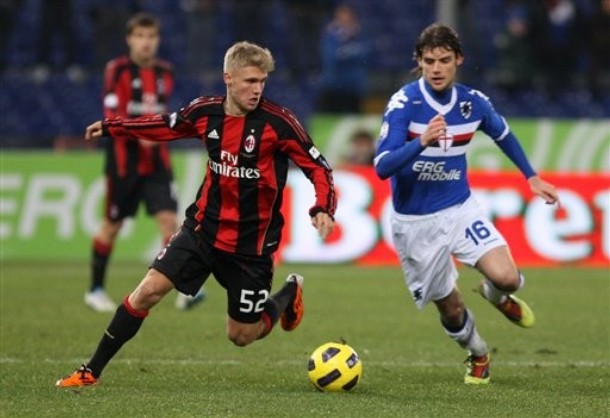 Speaking of the weekend, a trip to Catania will not be an easy task. Diego Simeone has taken over and the extra week will instill the hard-nosed tactician’s philosophy on an always challenging opponent in their home stadium. Injuries will still be a problem for Allegri but the new signings and some recoveries should help get this team back in order. From the looks of this match and the fact that Lazio follows Catania midweek you have to believe Allegri will be looking for a balance, your guess is as good as mine, but here it is:

This works on a few counts, first it gives a handful of players, ie Emanuelson, Robinho, and Cassano, a break and a start against Lazio. It makes use of Janks who is now healthy and can play in the mid and provide cover for Ants who can get forward. It also sticks with Pato’s hot feet and gives Merkel a reward for playing well yet again. See you all on the weekend, three wins on the trot a chance for a fourth and a LB potenially still to come! Not a bad month to be a Milan fan...