I want to do a two part tactics piece, Tuesday and Thursday, previously exploring Milan’s toothless attack the last few weeks and today a quick explanation of corner kick marking for those not familiar and hopefully explain how Lecce’s goal could have been prevented.

Set piece, free kick, and corner kick marking is essentially all the same, and if done properly is usually not a problem. But one little mistake in communication or reading of the offensive and even the most experienced and discipline team can pay. Set pieces are a funny thing, and for a team the likes of Lecce, they are sometimes the only hope to get a goal against a big Club like AC Milan. We see it often in the EPL where smaller teams will bury set pieces and make the big boy's pay, sometimes it is trickery, but more often than not it is simple mistake as was the case with Milan.

There are two ways to approach set piece marking, the traditional man marking and the zonal marking that was both popularized and demonized by Rafa Benitez at Liverpool. Personally, I have always been a strong proponent of man marking simply because it alleviates the fear of two players breaking into a zone and defenders being forced to read and react. Milan's often relies on the man marking method, thankfully, but on this day even a defender as wily and experienced as Nesta showed how difficult man marking can really be. First and foremost three things will always happen on set pieces, and these three things will always occupy three players if not more. The first being fronting the ball, and the second third being to mark the post, or having the responsibility to fall back to the post if the team is holding a high line on a free kick. The rest of the players are required to do simple math, if the offense sends seven players into the box then the defense needs seven markers. It is also very common to see strikers track back and defend in these circumstances because of their ability elevate and use their heads effectively, Drogba is one of the best, but Edison Cavani is also a very good.

Lecce did nothing out of the ordinary with their corner, but on the first chance which went off the post, Milan already showed some cracks. It never helps to have a second string GK in the goal for set pieces because he holds the immediate responsibility of checking the marks and making sure every attacking players is accounted for. After that the CB's need to mark the strongest aerial threats and usually in the area between the six yard box and penalty spot. Midfielders often fill in the rest but on the first corner kick the Lecce players broke sooner and in an staggered fashion and Milan was not able to asses this and mark everyone, a deflection and post saved them but the second corner was not as lucky. A great ball played into arguably the most dangerous place on a corner kick, the area between the 18 yard box and penalty spot, and Nesta was unable to front the ball quickly enough to stop Olivera from putting in a great shot. Lecce took advantage and because of this alone deserved the point. 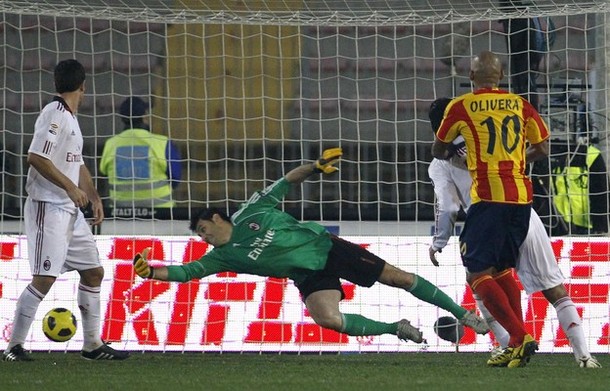 So how could this have been prevented? The simplest way is to overcrowd the box, especially if you have a lead, there is little need to counter quickly so bringing ten men in to defend a set piece or corner should be a given. The other most simple and almost given mantra to set piece marking is simply getting goal side. It can't be stressed enough, but by getting between your mark and the goal you will at minimum block a shot, but this forces the attacking player to take an additional touch to make space, or look for a pass which at hopefully at this point is non-existent as the defense is pulling forward to put players offside. Teams often devote entire training sessions to this, but as you can see it is simply a matter of players doing their best to get into position and mark their man, if not any team can pay for it, and Milan is no different.