Share All sharing options for: Tactics Tuesday: Lecce Part I

I want to do a two part tactics piece, Tuesday and Thursday, today exploring Milan’s toothless attack the last few weeks and Thursday a quick explanation of set piece marking for those not familiar, and hopefully explain how Lecce’s goal could have been prevented.

The past few weeks Milan have struggled to pass the ball into dangerous scoring opportunities. Thankfully Cassano has made an impact in almost every match he has played slotting home great passes and generally making space where there appears to be none. Speaking of space the compact play of both Cagliari and Lecce puts space in the attacking third at a premium and this requires a simple shift in the way the team attacks in order to create scoring chances.

When a team organizes it defense and midfielders so closely together, as chosen by Lecce and Gigi DiCanio, they actually want their opponents to have possession on the edge of the attacking third. By letting their opponents build up play slowly it allows them time to funnel back in behind the ball and close almost every passing lane and channel with one if not two players. When this happens Milan seems to grow frustrated, specifically Zlatan, as he tries to thread low percentage passes through defenders legs and into the penalty box which is clogged tighter than a drain in a girl’s dorm room. As any good Coach will tell you, "You can't play the ball through an opponent!"

This defensive tactical deployment is not insurmountable and Milan has often been confronted with it from the Carletto era onward. Thankfully Pirlo has always had a knack for playing a raking ball across the field to disrupt the defense and find space for a 1 v 1 opportunity to goal for players like Pato and Kaka before him. Without this long ball threat, Milan has to take a more simple approach and keep the ball on the ground, passing both quickly and in tight quarters to catch defenders off balance and get them going backwards, which has been done by Cassano in exemplary fashion.

This all starts by keeping possession a bit closer to midfield, no matter how tactically discipline a team is, eventually players will start to creep forward hoping to intercept a pass and start a counter. This requires both patience and precision and as the opponent starts to inch forward the quick one two combination passing can start to carve out the defense. Against Lecce Milan rarely had Zlatan and Pato close enough to combine, let alone create a one-two passing opportunity. When they were able to have a quick combination the only player in the box was Seedorf and his lack of height and movement were not beneficial. 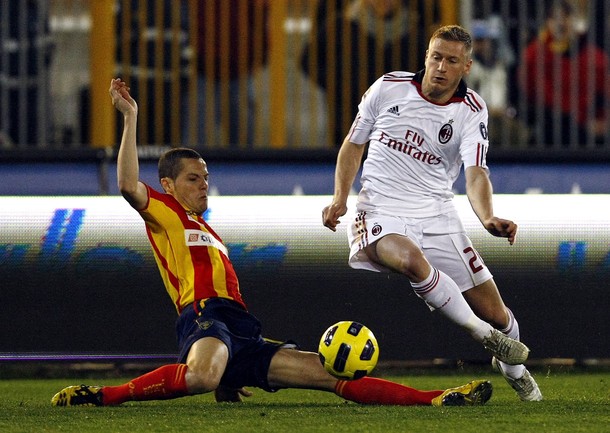 Another simple way to break down the defensive front of a team like Lecce is to spread the field as wide as possible. At times Abate showed he had the skill to do this and his crossing and marauding runs grew more dangerous as the match wore on, but when the flanks are not equally dangerous the opponent can shift and cover the more dangerous side. When this happened Pato needed to move to the opposite side and switch with Zlatan, sadly Allegri and the team didn’t make this move until the start of the second half and by then the match had opened up as Lecce was down a goal and needed to attack. Sadly Milan could not capitalize. 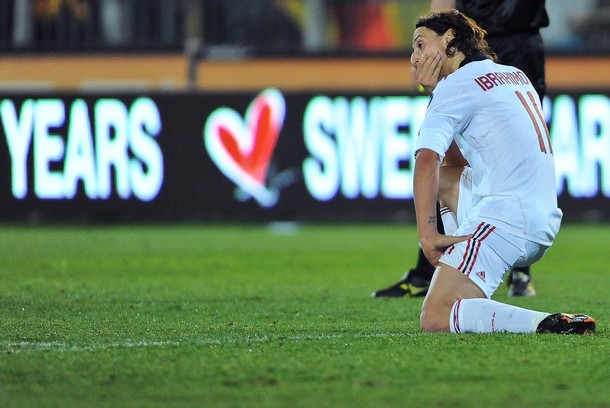 Cassano’s precision passing in tight spaces, and Robinho’s penchant for playing like a jack in the box and popping up all over the pitch will help this alleviate this problem, but in the meantime strikers need to take the few chances created and make the opponent pay for playing so deeply. Until that happens opponents will be happy to defend like this because Milan has proven they can’t deal with it effectively quite yet. Lack of patience and mounting frustration as shown by Rino and Pato at the half will give team’s confidence that this game plan is they way to beat AC Milan.