In the spirit of the silly season it is time we entertain some much racking with a Thursday Milan musings:

-In the rumor that will never die, Mario Balotelli will someday join AC Milan. This is OK with me but only after Mario addresses the following concerns:
1. Stay healthy and contribute
2. Prove yourself at Man City
3. Drop Mimo Raiola! OK, I know he is now Fester’s best friend but this guy can’t seem to get out of his own way.
All kidding aside, Mario would be a welcome addition but it would most likely be at the expense of Pato or Robinho, or hold off until Zlatan retires. 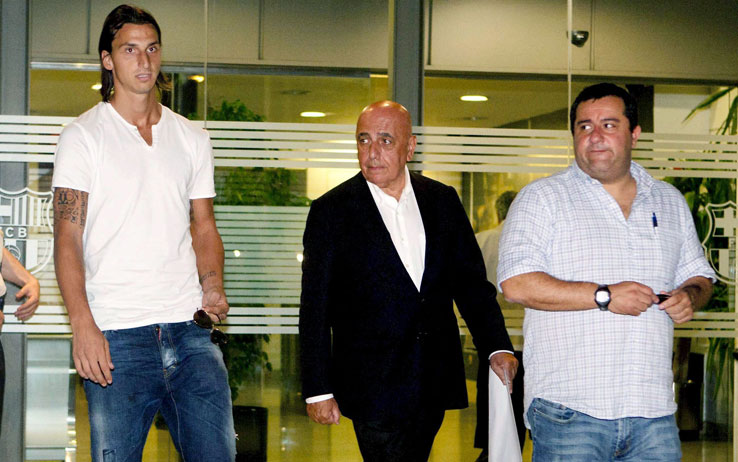 -Speaking of Raiola, add this to the list of reason I don’t like him. He also represents Mark Van Bommel and is trying to bring him to Milan. Imagine for a moment an AC Milan squad with not one but two slow aging Dutchmen in the midfield!? Somewhere the Flying Dutchmen are scratching their head wondering what happened. Van Bommel surely brings some edge and experience to the bench, but will he happy with that role and is it worth bringing in an over the hill player to take playing time from a guy like Strasser who is finally start to find his legs? I can't be in favor.

-If the Van Bommel deal doesn't go through, and here's hoping, then Milan still have their sights set on Lazzari. Watching him play last week for Cagliari was impressive. He can move around in the midfield either in the 3 man midfield line or behind the strikers and has both technical and tactical ability to be an asset. Ideally a team with him alongside Pirlo and Boateng all behind Cassano would be relatively unstoppable. Reports in the news have been rather conflicting with some articles having the player almost ready to sign while others saying Cagliari and Cellino won't let him go without a replacement. Maybe Van Bommel is willing to go Cagliari?? This is a smart move for Milan and it should be pursued relatively strong now with the maybe a loan and purchase in the summer.

-Gooch is being sent out on loan for the remainder of the season. Have to feel for a guy who made way more news off the pitch than he did on it. His five minutes of playing time did little to compare to the knee injury, rehab, decision to play for free, or the infamous fight with Zlatan. Let's be clear he is a good defender, strong, tall, and imposing but the word around much of Italy is whatever little pace he had before the injury has not returned and his ability to turn and chase simply are not enough. A move to work with his former Coach, Michel Preud'homme, whom he won a title with at Standard Liege is a good start and playing for Dutch Champions FC Twente can't hurt either. The move is only for a loan but you have to believe a deal to buy could be arranged if all parties were on board.

-So with one less than CB roster and Bonera seemingly uninjured and still a viable choice Milan have turned their eyes toward Phillip Mexes. The Frenchman was near a deal with Roma, but those talks have cooled and Milan have always been admirers. I am hot and cold on Mexes, on his best day he can be a beast as he showed against Milan before the Holiday. On his worst day he is conceding a PK and taking the walk to the dressing room usually reserved for his teammates DDR or FrankyT. You have to wonder if maybe playing for Roma makes you more susceptible to Red Cards, but this is a risk that needs some serious consideration for a team in a Title race. Sadly while were lusting after Mexes it looks like Juventus has come to terms with Barzagli, a player that would have easily been a great move for Milan. Once again our inability to recognize and lure Italian talent bites us in the ass.

-I end simply with this, the Ronaldinho experiment at AC Milan is officially over. I won't be memoralizing or eulogizing over him, he came and went and will simply be forgotten especially if Milan can win the scudetto in a year that he was basically sent packing. I can't stop you however from sharing your Ronaldinho moments in the comments here and please feel free to do so. Soccernet ran a great piece yesterday that echoed much of my sentiment in recent years. It is hard to support or even sympathize with a player who had it all and threw it away. Ronaldinho arguably had 3 of the most amazing seasons a player has ever had, but after that he did little, he couldn't sustain it, and he couldn't meet his own levels of play. So as watch Messi win his second Ballon D'Or en route to his third La Liga title already having won a CL, you have to wonder if Ronaldinho will even retain a place in the game's higher echelon of greats. That is not for me to decide, I believe Ronaldinho has already decided that on his own for many supporters of the game.