Share All sharing options for: Tactics Tuesday: The Cassano Effect

In less than forty-five minutes of game action it is evident what Antonio Cassano brings to the table for AC Milan. The lack of match fitness actually gives me even more hope because what have been strong, albeit sluggish performances, should only improve. Three assists on three crucial goals directly responsible for four points suddenly makes the purchase of Antonio Cassano about as smart a move as Milan has made in the past few seasons. More importantly though it gives Allegri options and as well as forces the members of the attack such as Pato, Robinho, and Zlatan to up their game to assure minutes and stay on the pitch. 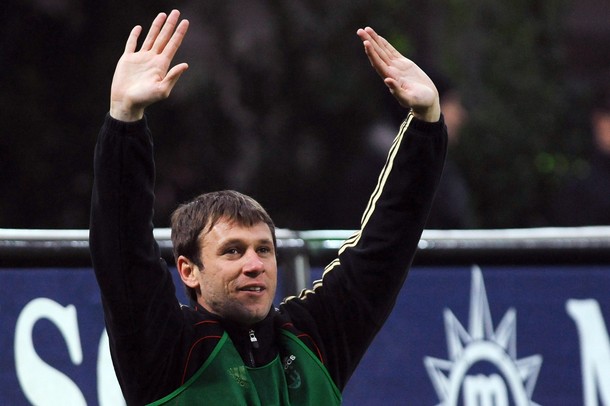 The key word and idea behind his play has been fluidity. His integration with his teammates and his ability to play in such tight spaces will only further frustrate defenses and create space for his teammates to operate in. As defenses close down Cassano, Pato can use his speed or Zlatan his strength to get in behind defenses and idealistically finish any chances given to them. It will also make defenses seriously reconsider the usual two-man marking of Zlatan in fear of leaving Cassano free to roam. If defenses still choose to double mark Zlatan with a CB and a back or two CBs then there is one less player able to move forward if a DM is forced to chase Cassano. Simply put he makes Milan’s attack difficult to contend with and dangerous.

Having Cassano on the pitch creates one of the most difficult attacking phases to defend against, but also one of the most dynamic attacking phases to watch. Good for Milan fans and bad for everyone else. The pattern of play Milan can now employ almost resembles an accordion, and while they have done this effectively at times this season with Prince, it will be even more polished with Cassano. Simply stated, farther from goal the attacking trident spreads wide across the edge of the attacking third, stretching the defense to create space for the second step, which is to contract the attack and allowing for one and two touch football forcing defenders to move back and towards goal and unable to mark and pressure. This was done to perfection in the goal against Cagliari, and the fourth goal against Udinese also began in wider area with Zlatan and Cassano literally meters away from each other to create the goal. Factor in the adding passing of an Andrea Pirlo, and suddenly Milan’s attack can be multi-dimensional and dangerous both with long raking balls into space and tight one touch passing in and around the 18 yard box.